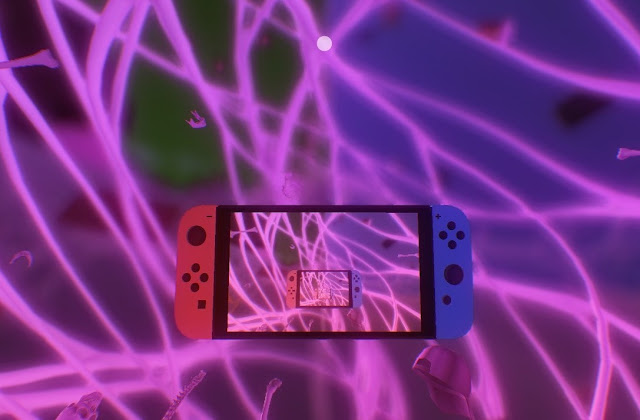 As the title implies, the pitch line for this game could be summed up as “it’s a game about everything.” Specifically, it’s about being everything, which has a philosophical double-meaning that its narrator explores. I was both intrigued and mildly alarmed by the description, that it would basically be a simple exploring game with some of Alan Watts’s philosophical lectures as narration. On the surface, it sounds like it might be extraordinarily pretentious. I can say that it is neither pretentious nor lacking substance; in short, you jump from thing to thing, from atomic size to the very greatest of scales, with the goal of wandering the universe while listening to ambience and lectures by Alan Watts, a famous British-American philosopher who has seen a(nother) resurgence in popularity as of late.

Related reading: For a second take on this game, check out Matt C’s review of Everything on PC

It’s worth noting that I am intimately familiar with Alan Watts’s lectures. I was first introduced to Alan Watts by modern electronic music some half decade ago. Watts was a charismatic fellow, with an easy-listening voice and a chuckle best described as infectious. In his lifetime, he had many hours of his lectures and monologues recorded, where he spoke largely about eastern philosophies, which at the time were enigmatic new ways of thinking to western culture. Combined with the grainy sound of the old recordings, these turned out to be perfect fodder for the “trippy” electronic music genres. Personally, after discovering him long ago, I went on to listen to whatever I could find on YouTube, despite the propensity for clickbait and some occasionally unnecessary music accompanying them. “Everything” brings us a whole new remix, only this isn’t music.

Being as familiar with his lectures as I am and taking much of it to heart – not as gospel or law, mind you, but under consideration – I have to stress that his words deserve to be listened to no matter the platform, a sentiment I’m sure the creators of “Everything” agree with. This is an excellent method of delivery (I’m aware that it was released on PC in 2017, but I hadn’t heard of it until now.) Especially given the Switch’s popularity among younger audiences, I fancy the idea of the butterfly effect, that a new generation of growing minds will be introduced to this way of thinking. With that out of the way, let’s dive into the game itself. 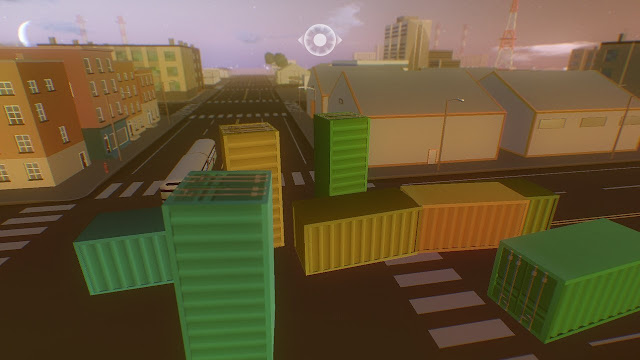 Graphically, “Everything” isn’t a technical masterpiece. Everything’s pretty low-poly and minimally textured. The main trick to the graphics is inherent in the design of the game; the camera focus changes depending on the size of the thing (or things) you’re currently in control of. The world is shaded decently enough and the models are passable, but they have almost no animation. Bugs skitter as they move, plants and trees re-grow in places to move, and animals do goofy forward-rolls reminiscent of Katamari Damacy. The similarity doesn’t end there, though, as you can also collect things as you roll, scurry, grow, swim, fly, whatever it is you do.

But despite it not being a modern mechanical wonder, it can be quite beautiful. Watching the sunrise as a continent presents you with a beautiful timescape of cascading colour. Playing instead at the atomic level is a vortex of kaleidoscopic lines and shapes. There’s something new to discover around every corner of the universe, and that mystery of what you’ll find next makes continuing to play almost compulsory. The game remembers where exactly you were, to some extent, as you ascend/descent. You can enter all the way to the atomic level into an entirely new micro-galaxy where there are new planets and micro-galaxies inside, and if you travel back out, you’ll be back where you were on a rock or a blade of grass.

Entering micro- or macrocosms at will and simply looking around is actually as fun as it sounds, despite not having a whole lot to actually do once you’re there. Searching for the quirky thoughts of other things is a nice touch, and I found my inner monologue voicing each of them in a way not unlike the scene from Hitchhiker’s Guide to the Galaxy with the bowl of petunias and the whale. 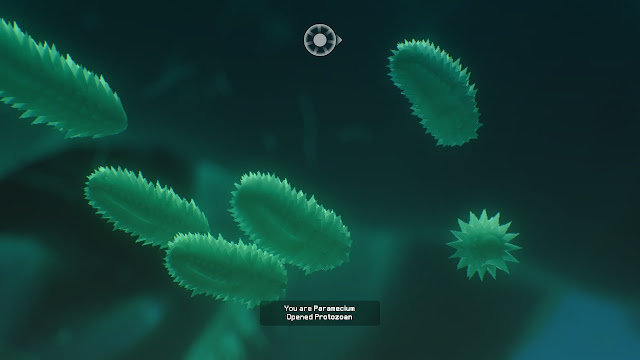 I wanted to recreate this scene for a screenshot, but the reason I couldn’t is why I now segue into the game’s flaws. There are a few, but they’re significant, and the biggest ones may be specific to the Switch. This has to do with the transformation mechanic you’re introduced to later, accessible by pressing right on the D-pad. Transforming into things in the sky, it seems, the game doesn’t handle well at all, spitting a critical software error at you and placing you back on the home screen. I’m willing to bet there are other combinations, or it may be specific to just the sky. In any case, that being the first time I actually tried this mechanic was really unfortunate and made me fear trying it again anywhere, especially since the crash set my save back to before having found it. To its credit, though, it has worked since everywhere else I’ve tried. You can normally turn into anything anywhere, and they’ll adjust their size to fit where you are. The game has no trouble allowing you to turn into a galaxy in the middle of the ocean. Just don’t transform into a whale in the sky.

I later discovered after unlocking the grow/shrink function that it too is unstable, at least as a continent, I shrunk until I crashed. Leaving it on autoplay with relatively random settings (all on) also caused a crash while inside a continent. So you’re very likely to experience a crash at least once on this port.

Onto less game-breaking issues, the camera not up to the task of so many different perspectives, and since your “move fast” button is tied to (A), your right thumb’s already occupied. I found myself using the “claw” technique on my controller to do both at once. Likewise, during autoplay or even documentary mode, the camera sometimes stays locked facing one direction following the object, making it significantly less cinematic than it could be, though it seems to correct itself after a time. Motion controls would be right at home here on the Switch and would at least help with the former issue. Considering this game was released in 2017, it’s unfortunate they didn’t decide to update it much for its Switch release beyond physically including a model of a Switch console to the “end of the tutorial.” 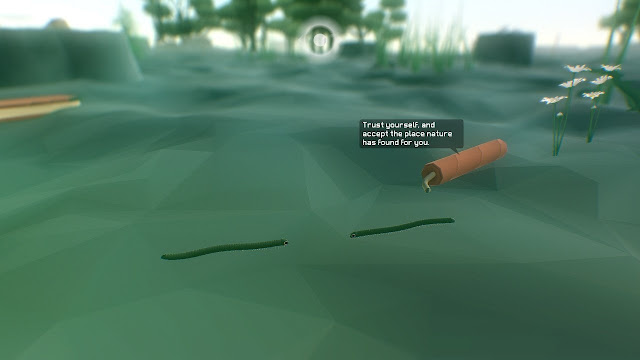 I’d have also liked to see more of Watts’s lecture snippets readily available. Or at least, the ones that you do find, to be longer. Some of them are only a minute long, and it’ll be another ten minutes or more until you find another. I have unlocked about half of them in my time playing so far, around four hours excluding autoplay time, and clocked that total at about 45 minutes, so I’d wager there’s about an hour’s worth of lecture at best. But it doesn’t all unlock right away once you’ve finished the tutorial, which I guess is a way of prolonging the discovery of the game, but not in a way I like.

As you reach the end of the base game, the content becomes more and more surrealistic and rather dark. I won’t spoil anything further than that. You’re shortly afterwards given a conclusion scene that places you back in the animal you started in and congratulates you for having completed the “tutorial.” The tutorial? I thought that was the game! It sort of was. But now there’s a “documentary mode,” a second autoplay mode with less customization, but adds on-screen the Wikipedia descriptions of the various things that you’d previously find only in the pause menu. It’s unfortunate then that autoplay and documentary are kind of gimped, and that’s ignoring the potential crashes. The toggles are nice, but the autoplay is still pretty slow and there’s no way to speed it up. In documentary mode this is made up for slightly by having Wiki descriptions on screen, but some descriptions are just one-liners for things, lingering on screen for 30-60 seconds as your object wanders… or gets stuck on something in the environment. It also seems to have a habit of returning back to the same objects in documentary mode, in which toggles are significantly limited, including not allowing you to change the frequency of ascending/descending. I want the functionality of both autoplay and documentary mode, and I’m not sure why we can’t simply turn on the annotations and toggle the random feature (which isn’t even all that random).

I want to say these issues are minor compared to the sum of the product, but the autoplaying documentary is a big appeal to me that’s just not up to snuff. I would love to have a constantly-running documentary mode of Everything with a lot more activity and more narration. The latter I can do without, I suppose, but in the former’s case, the content is there, it’s just not implemented as well as it could be. 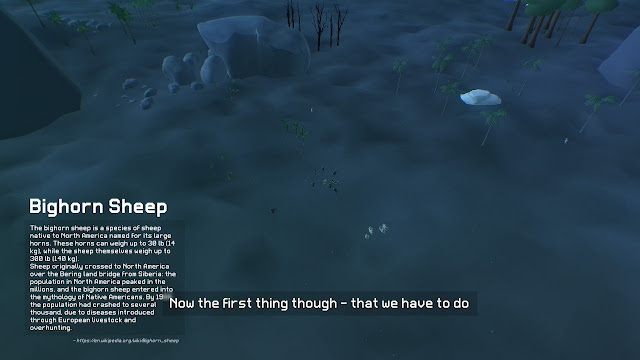 Still, the game itself sets out to accomplish a monumental task and does so at least passably. It has quite the ambient soundtrack, which is arguably longer than it takes to see most of what the game has to offer. As a whole, “Everything” is marvelous. You’ll find yourself entranced, however briefly, in the game’s faux-universe. For such minimalistic gameplay, it’s actually quite mesmerising. I played it for much longer than I anticipated before starting it up for the first time, and looked forward to it later; for that, it gets big points from me. But I am legitimately saddened by the shortcomings of autoplay, and hope it sees an update. I also can’t ignore the myriad crashes I encountered. Given that this is a port to a console, and the Switch has consistent hardware specs across the board, it’s clear the game’s stability wasn’t re-examined prior to its Switch debut. No cheeky philosophical quip is going to make that look anything short of lazy.