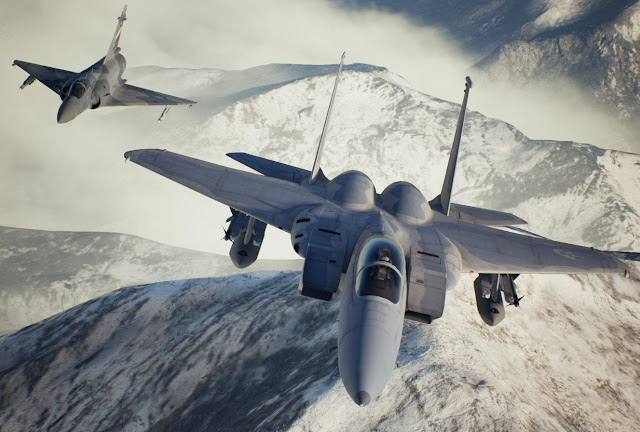 Serious aircraft simulators are for really hardcore players. There’s a certain thrill to mastering the complex controls for aeronautical terms I’d never be able to memorise, I’m sure, but those games are well beyond me, which is unfortunate, because I enjoy the idea of them a great deal. Ace Combat 7 is the perfect middle ground. It’s complex enough that it feels like you’re flying around in the cockpit of a combat aircraft. At the same time it’s accessible enough that you don’t have to learn the subtleties of actual flight to enjoy it.

Related reading: Our review of the Ace Combat that was released on Nintendo 3DS.

Ace Combat 7 is also remarkable in just how cinematic the presentation has turned out to be. Part of that is from the frequent and lengthy cut-scenes, which were produced to a standard well beyond what I was expecting. They tell a story of global-scale war, loyalty to nation, falls and redemption. And without giving away anything, it’s told exceptionally well and offers up plenty of unexpected moments along the way. There’s a mission early on that’s designed around a catastrophic failure, but for the first 18 minutes or so, it all plays out like a very standard combat mission. Having that all come crashing down after the extended work to complete the mission’s objectives properly was an impressively shocking moment.

I’m also a fan of the way the narrative cuts into and out of flashbacks. As a result of the heavy use of this technique, I came away with a much better sense of character and lore than I expected I would going in, and it’s performed with real cinematic flair. In-game, the full replay you get of each mission, which dynamically cuts between camera angles, only adds to the cinematic aesthetic too. 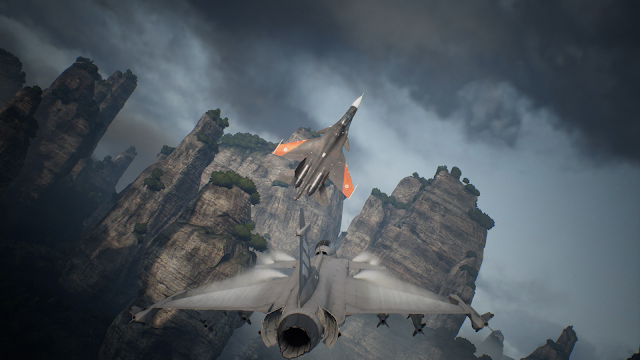 It’s also interesting to have stories of war told from a Japanese perspective. While Ace Combat takes place in a completely fictitious world, there are vague resemblances to real world nations, empires, and actions, in a similar way to the way the JRPG franchise, Valkyria Chronicles, does it. So, while this is the same world that features elevators to space and airborne aircraft carriers that drop swarms of stealth bomber drones, there’s also enough parallels in there to catch some very Japanese musings on modern warfare. There’s a distinctly different tone to war stories told by the Japanese, because Japan was on the losing side of the most horrific war of all, and that tone I find to be more appropriate. Speaking very broadly here, Japanese war stories tend to focus on what’s lost in war, and the impact that war has on people and soldiers, whereas western war stories tend to glorify the cause and lionise the fighters. Ace Combat 7 certainly belongs to the traditions of the former.

There’s a meaty campaign on offer in Ace Combat 7, spread across plenty of missions that are themselves multi-staged. It can drag. It’s worth it in the end because of the story it tells, but it can drag. I found that when I got stuck on any particular mission I tended to get really stuck, because while there’s an upgrade tree and you can access better planes and weaponry through grinding, levels are designed to test the pilot’s skill over protracted periods of time, and those upgrades only provide a mild mitigating effect to that.

When it all starts to click, though, nothing feels better than Ace Combat 7. Diving down from thousands of miles of elevation to take out an unsuspecting plane with some missiles has it all: a sense of speed, the raw power of the missiles, and the flames of an exploding plane to burst through at the end. Almost as exciting is when you’re running low of air-to-ground missiles and decide to strafe a target with bullets instead. Rushing across the ground just metres from a fiery crash is thrilling unlike what any other military game offers. 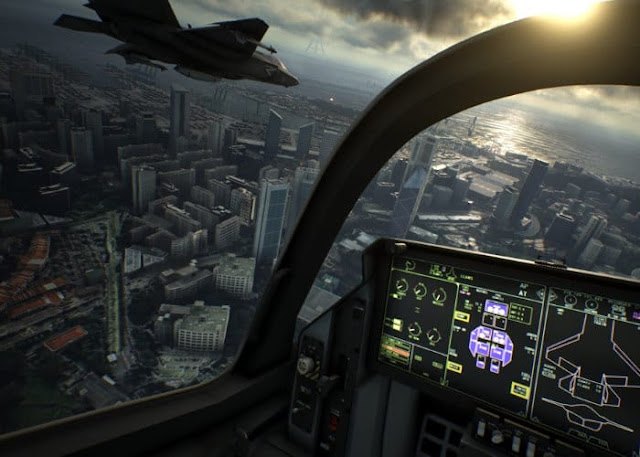 Indeed, speaking of bullets, perhaps the most satisfying moments in Ace Combat are where you use standard fire to take out a target. Missiles all have homing devices on them, making them relatively easy to use. As anyone who has played a fighter combat sim will tell you, with bullets at the speed in which aircraft move, you can never aim at the aircraft itself. You have to aim at where the aircraft will be a second or so down the track. Developing the ability to successfully use those bullets is the ultimate show of skill, especially given that the AI is more than capable of evasive actions.

AI can’t be easy to program in a combat game where there’s a full 360 degrees of movement, but Ace Combat’s opponents know how to use their missiles and work their way to your vulnerable behind. During the more difficult missions there’s a definite sense of rhythm in which you’ll be working hard to evade and dodge, while trying to work yourself into a possible to bring your own weapons to bear. Newcomers might find the earlier missions to be frustrating, because simply firing those missiles and expecting the homing technology to work isn’t going to cut it; you need to set yourself up in a good position before firing the weapon, because the enemy can – and will – evade attacks otherwise.

Performing well at missions earns you points, which can be used to purchase new planes and upgrades. There’s not nearly as many planes in the game as some free-to-play military games might offer, but then Ace Combat is better balanced and not structured around gouging you for cash. You can jump online and play, but I wouldn’t recommend that until you’ve worked through the campaign; while the controls of Ace Combat might be accessible and easy to grasp, you’re only going to be frustrated if you find yourself competing with skilled players that have really mastered the complex physics and maneuverability of these planes in the air. 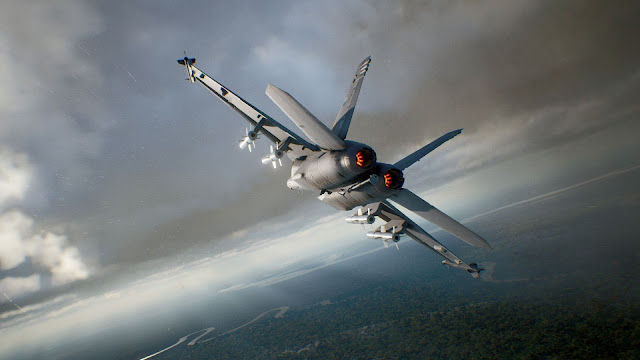 One other noteworthy thing for PlayStation 4 owners; the VR mode in Ace Combat 7 is absolutely incredible, and a perfect example of what VR was designed for. The game does an excellent job of creating the perception of movement, so that when you do a diving attack from up high, your body may well respond to the perceived drop through the sky. There’s also something absolutely beautiful about being that high above the ground and having a proper 360-degree view of it all. With that being said, this is also not a VR game that people who get motion sickness from VR should be playing. I’m comfortable enough with it, but I know plenty of people that have violently sick reactions to this game from only short periods of play.

It’s now in its 20th year, but Ace Combat 7 shows that there’s plenty of life yet in the series. Neither pure arcade, nor hardcore simulation, it straddles the line it needs to offer both a sense of flight and fast, furious dogfight action, even as it tells a cinematic and genuinely enjoyable story.

There’s a new fighting game on the block, and it features… Power Rangers