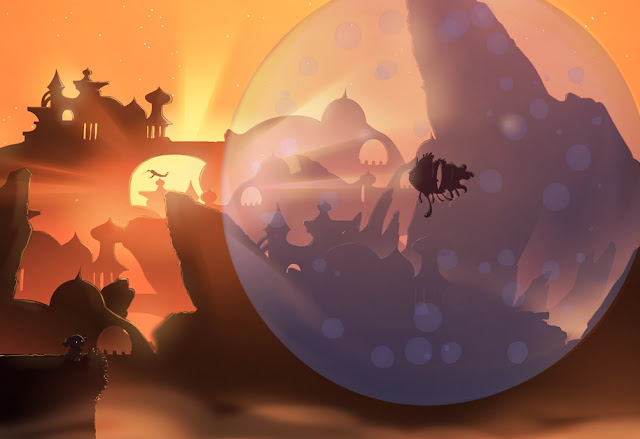 OkunoKA is a hardcore platformer set in a colourfully nightmarish landscape and starring an impossibly cute blue puppy. What starts off as breezy platforming across lush backgrounds soon turns into one of the most punishingly difficult games on the Switch, rivalling titles like Super Meat Boy or The End Is Nigh in its brutality. Developed by Italian studio Caracal Games, OkunoKA is a game that will have you feeling whimsy, anger and triumph, in that order.

At first glance, you’d be forgiven for thinking this game would be a clone of Super Meat Boy. The floaty jump mechanics, the compact obstacle-course levels and abundance of instant-death spikes shows a lot of inspiration from the original hardcore platform game. And that’s what the first world is like, too – OkunoKA starts out feeling familiar. You’ll be tasked with avoiding spikes and enemies while making a beeline for the exit of each level, while occasionally picking up a super-difficult optional objective. Boasting over 100 levels and some very unique bosses, this is a game that will surely put your skills to the test.

The game starts introducing its own unique mechanic over the first few worlds. Ka, the long-tongued hero motivated by eating and sleeping, is able to switch between three polarities that make certain platforms in each level appear or disappear. This allows players to alter a level’s architecture on the fly, and it’s quickly introduced that you will need to be doing this rapidly to create the quickest path from the entrance to the exit of each level. Players are graded solely based on their speed, and the polarity mechanic adds a degree of planning to a game that already requires quick thinking and twitch reflexes. 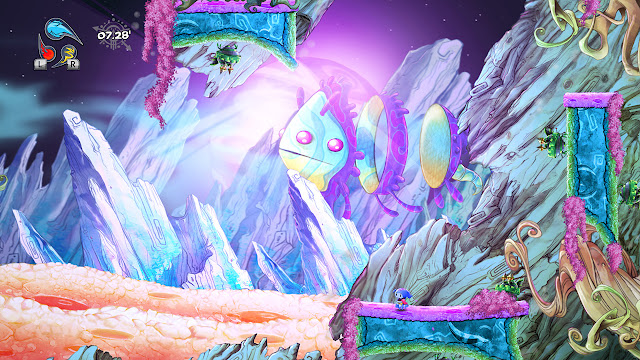 I know that difficulty is a subjective thing, but perhaps Caracal Games went a bit too far with this one. For comparison, Ninja Gaiden released recently on the Switch’s NES library and for all that game’s reputation for difficulty, I can finish its levels latter faster than I can finish one in OkunoKA – and when you do actually finish a level in this one it’ll take you 30 seconds or so. Each level just has so many different ways that things can go wrong, and to add insult to injury the death counter resets after leaving the menu or the game, so you don’t have a sense of how much cumulative effort you’ve put into some of the game’s harder levels.

The game’s difficulty is a mix of timing, precision and planning. Most are box-rooms and have clear direction signposting, but the high variety of challenges in an individual level can cause problems. It feels like a grind sometimes to figure out how to get past the early parts of the stage, only to run into even more fiendish challenges that will send you back to the very beginning of that level. Another one of my pet peeves is the easy-but-tedious speed-bump at the start of each level which you just need to remember to sidestep, before you even have a chance at approaching the actually difficult obstacles. Needless to say you will die a lot. You’ll find yourself well acquainted with the phrase “I didn’t even realise there were spikes there”, coupled with his meaner cousin “how was I supposed to know there were going to be spikes there?!”. But, despite every setback the game tries to throw at you, you’ll make progress, and it will be satisfying.

The game’s hand drawn art style is sure to turn heads, and goes a long way to making OkunoKA stand out. The game’s organic, surreal landscapes seem like if Rayman Legends took some pointers from David Cronenberg, leading to some twisted locales and very weird monsters. I particularly enjoyed how the bosses had attack patterns that were informed by their artistic design, which made the fights at the end of each world much more bearable despite their incredible difficulty. Unfortunately, in most levels you’ll be barrelling through levels too fast to appreciate the artwork. The visual style is also much looser compared to the utilitarian symbols of games like Super Meat Boy or N++. While coiled spiky vines in the same hue as harmless background objects can still be avoided in a more forgiving game like Rayman, in OkunoKA you’ll earn deaths just from not realising what is dangerous and what isn’t. 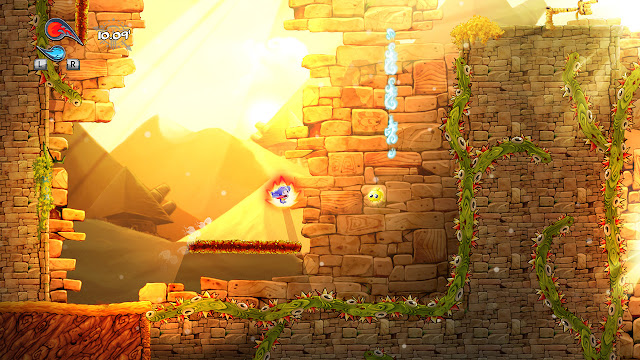 I also had a slight issue with the controls in OkunoKA – the game is all about finishing levels quickly and efficiently, and there is a dedicated run button for when you need a little more speed. While switching polarities is mapped to the shoulders, running is the right bumper or holding the X button, which is not the most comfortable of setups. There’s unfortunately no button to customise controls to your liking, and also no option to turn off vibration except from the Switch’s home menu – and this is a game which vibrates very strongly upon each death.

It might seem that I’m overly critical of the little things in this review, which is fair – OkunoKA is exceptionally serviceable to the hardcore-platforming brand, and there’s not a whole lot for me to say beyond that. The action is well paced, the level designs are punishingly inventive and the challenge is sure to satisfy fans of this type of design. The additions and tweaks that Caracal Games has made to the tried and tested formula have their ups and downs, and despite games like Celeste paving the way for more fair, controllable difficulty, OkunoKA is gung-ho in being one of the most challenging platformers I have played in some time. While I wouldn’t recommend OkunoKA as an entry point to the masocore style, it’s definitely worth a spot in your library if you’re a seasoned genre fan.