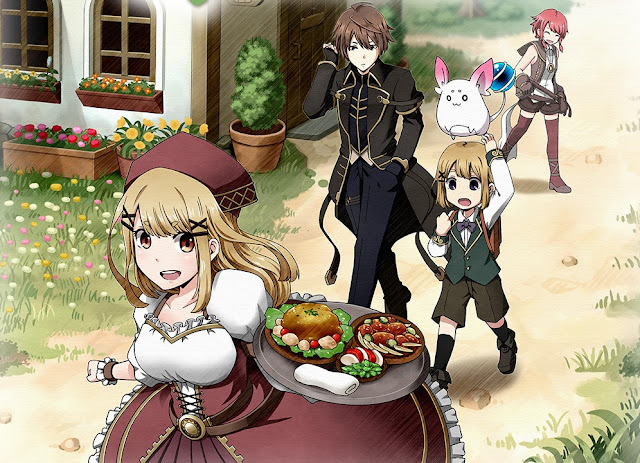 Marenian Tavern Story is basically classical Atelier but with a different name. The team at Rideon took a crack at it with Adventure Bar Story a few years ago, which showed a lot of promise but ultimately fell short of its goal. Marenian shows a lot of improvement, though. A lot.

Related reading: The developer of this game also developed the Mercenaries Chronicles tactics JRPGs. Here’s our review of the triple pack on Nintendo Switch

Right from the start it’s clear that a lot more effort when into making the narrative for Marenian than what we saw in Adventure Bar Story. You play as Patty, a pretty young woman whose family falls on misfortune when the young brother accidentally “befriends” a poverty deity. It looked like a cute little mouse-thing, so the boy fed him, and BAM! the previously well-to-do family has all of their property repossessed and they were thrown out on the street with nothing. Thankfully, the mayor is a friendly chap that lets them take ownership of an abandoned tavern, so Patty and her family set about building their fortune all over again.

It’s a silly plot, and it’s one that’s a little too earnest with the “hard work and a cheerful disposition is all you need to succeed” aspirational tone. Cheerful as the likes of Harvest Moon, Atelier and Marenian Tavern Story are, and though they’re not designed to think on too hard, the reality is that they do sell a way of thinking about work, success and happiness that is downright naive in the current social and economic environment. This isn’t a criticism of any of the games mentioned, since I love them all, but it’s just as well they’re so bright and cheerful and the video game equivalent to comfort food, because they’re not what you’d typically call “insightful.”

What a sweet little game so far #NintendoSwitch pic.twitter.com/XrhnuTbVxr

Naive it might be, but Marenian really is cheerful and unendingly pleasant to play. Each character is a variation the various traditional, safe anime tropes, and Patty’s growing social circle soon fills with an eclectic mix of bright and perky personalities. Patty herself is a bit of a sweetheart, and the overall positive, generous, homey tone of the storytelling makes it simply impossible not to care about any of the characters. All that lets it down is a localisation that’s done on the cheap. There’s far too many literal translations from Japanese to English that result in phrasing and terminology that is odd and often takes the character completely out of their previously established character. Marenian Tavern Story isn’t broken, and the narrative is perfectly legible. It’s just that the script just needed a further run-through by a writer to help it read better and more consistently.

The pleasant narrative is complemented by some delightful gameplay. Marenian Tavern Story is made up of two parts; the dungeon exploration, and the cooking. In the dungeon exploration, Patty and her mates run around collecting ingredients to use in the cooking back home. Some ingredients can be picked up from designated “collection points” in the dungeon (trees, patches of grass, and so on). Other ingredients can be found by defeating enemies, which pop up randomly and are fought in a very traditional turn-based combat system.

Once you’ve got loads of new ingredients, it’s time to head back to the tavern and cook up a storm. There are hundreds of recipes to learn, either form finding the recipes in-game or simply guessing at a combination of ingredients. Naturally, you need to have the right ingredients in the first place. Then you put the dishes you created on sale, and after the bar closes for the day, you get whatever money you’ve earned added to your balance. This is the only way to earn money in Marenian Tavern Story, and you need to make sure patrons have a continually updated menu to choose from – offer the same thing too many days in a row and they’ll get bored of the dishes and stop coming. 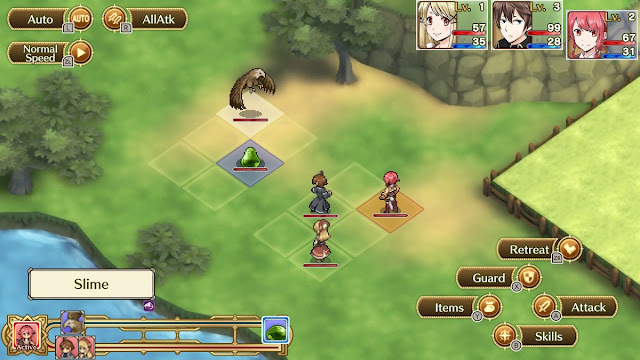 The other quirk in this system is that you need to get your characters to eat the dishes too. Food converts to experience points, and this is the only way to level characters up. So you’ll be constantly needing to make a decision between whether you want your characters to be more powerful, or if you could use the additional cash from selling the dish at the restaurant. There’s a fair amount of grind involved in Marenian Tavern Story; it’s not that the combat system is difficult or the bosses will pose much of a challenge, but rather the need to get specific ingredients, at quantity, to prepare high-value dishes in a quantity to satisfy your customer base involves a lot of legwork. There’s a limited capacity to purchase ingredients from a store in town, but it quickly chews away any profit margin.

Overall, it’s a good system. Because there’s such a depth of recipes, and a need to experiment, Marenian Tavern Story has a good sense of growth to it – much like in the Atelier series that it so clearly draws inspiration from. Each new recipe learned, and every time you’re rewarded with a huge night of profits and a sold-out menu, feels like validation. It’s unfortunate that there isn’t any art to visually depict the dishes that you’re creating – I kept remembering how the high quality images of the food in Final Fantasy XV made me want to cook up every dish I could, just to see how it looked – but the dishes are mostly standard, and easy to mentally visualise anyway.

It’s hard to find anything to really criticise with Marenian Tavern Story, because it’s so sweet and good-natured that it’s hard not to enjoy your time with it. It’s let down by budget constraints and a pedestrian localisation, but it’s also a vibrant, pleasant and light-hearted little adventure that gets everything right in the areas that matter most. And, because it’s so clearly inspired by the early era of the Atelier series, there’s a nice rush of nostalgia in there for fans of everyone’s favourite feel-good JRPG franchise.

On bringing the Māori to Civilization VI