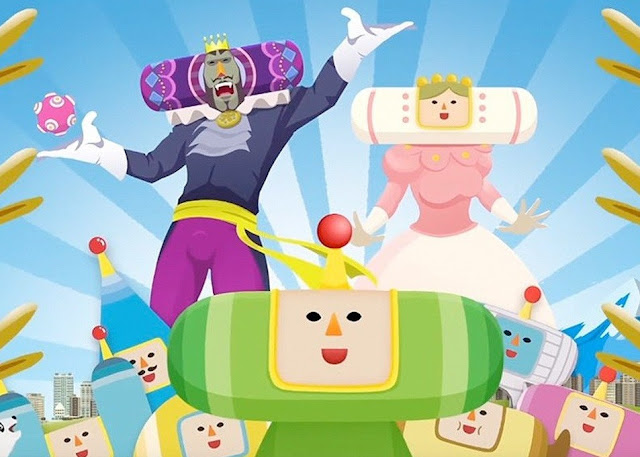 When we think about “surrealism” as it’s applied to videogames, we usually end up taken down some pretty dark paths. Hidetaka Suehiro with Deadly Premonition, and Goichi Suda with the likes of Killer7, immediately come to mind when thinking about surrealistic games, or alternatively something like The Path in the indie space. But surrealism doesn’t require an inherrently dark approach to narrative or theme, and Katamari Damacy Reroll is the perfect reminder of that.

In fact, if you could imagine a polar opposite to “dark”, you’d only be getting close to how bright, colourful, and supremely happy Katamari Damacy is. This game goes well beyond the poles. It’s nearly impossible to simply describe the wild surrealism that it indulges in at every moment, but if we’re to take the baseline definition of the movement: A 20th-century avant-garde movement in art and literature which sought to release the creative potential of the unconscious mind, for example by the irrational juxtaposition of images, (emphasis mine), then we’ve got a pretty good summary of Katamari Damacy. At every opportunity, this game juxtaposes the heck out of things that seem to be plucked at random out of a fevered dream. The introductory montage, below, sets the scene beautifully, but in-game levels are not so much designed as they are dumping grounds for the most eclectic combinations of items you could imagine. Or, more likely, you couldn’t imagine, because, no matter who you are, you don’t have a creative mind that comes close to those that worked on this game. Don’t feel bad, though, because neither do I… or anyone else outside of this developer team, really.

Because the world is so seemingly random, everywhere you turn while playing you’re guaranteed to see something delightfully unexpected. For a game that’s all about the simple joy of exploring, the overload of colour and energy is draining – I can only play Katamari Damacy in short bursts – but also vivid and the endless exuberance is incredibly catching.


If you were being cynical you’d say that all that colour, energy, and joyful randomness of Katamari Damacy is a cloak for a game that’s rather shallow at core. It is very simple. You start out with a tiny ball, and your goal is to grow it progressively larger by rolling it over objects in the world. At the start, you can only collect the smallest of objects – pins and Shogi pieces, for example. As the ball grows, however, it’s able to gobble up increasingly large objects, and it’s not long before you turn into a moving black hole, sucking everything up in your path.

In practice, Katamari Damacy is a puzzle game; you’ve got to get the ball to a certain size within a time limit to pass the stage. You need to be able to find areas that have objects that are of a good size for your expanding ball, and you’ve got to be efficient about movement, because some of the targets are sharp, and there’s all kinds of threats in each environment that can knock stuff off the ball, making it smaller, and that much less likely that you’ll reach the target size within the time limit. But the above is really underselling what this game is actually about. Katamari Damacy isn’t about solving puzzles, or wrestling with the sometimes aggravating tank-like controls and unfriendly camera. Katamari Damacy is a Sisyphean task to find colour and joy in the world.

Back when I was interviewing game creators for my book, one of them said something that’s really stuck with me in the years since: “humans have a fundamental need to make their world more beautiful.” It’s true; as people we respond positively to aesthetically pleasing spaces, and that’s why we fill our homes with things that are aesthetically pleasing, while getting rid of things that are not. People don’t tend to like mess or dirt, and don’t tend to respond well to it. In Katamari Damacy, you roll up the mess and clutter in the world, and those balls of mess that you collect get thrown up into the sky to become aesthetically pleasing stars, looking down at you from the heavens. It’s metaphor and symbolism, y’see? Katamari Damacy is really the story of humanity’s relationship to the arts. 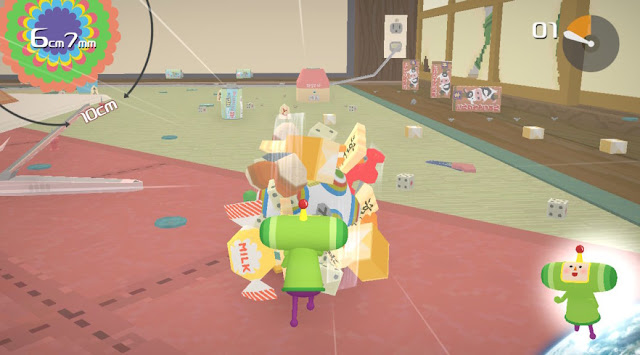 Katamari Damacy Reroll is a remake of the original, released back on the PlayStation 2. It’ll feel fresh for most people, because almost no one played that original PlayStation 2 release, and unlike most games of the PS2 era and HD remasters, Katamari Damacy also looks current. The developer brought the resolution up to meet today’s standards, but the art direction and design is so distinctive, creative, and outright brilliant, that unlike games that strove for “realism” back on the PS2, this one doesn’t look like it has “aged” a day, and so the work done on “modernising” the visuals is comparatively limited. Once again; developers, aim to be creative rather than realistic. All you’re doing in aiming for realism is putting a use-by date on your work.

Katamari Damacy’s controls will forever be something you struggle over; I know I am. As I explore and manically try to grow the size of my giant sticky ball, my hands inevitably start to sweat any time I get close to a thin edge or ramp. There may be some truly awesome stuff to suck up into my growing ball of junk at the other side, but actually navigating over there is always going to cause me a great deal of trepidation. When the controls to navigating the ball through tight areas doesn’t get me, the camera, which really struggles when you start getting close to large objects or walls, is bad enough that it also costs me the occasional level, because it tends to swing around in such a way that before I know it I’ve crashed into something and the ball has shed some of its precious building blocks. In later levels the time limits become what can only be described as cruel; fitting, considering the narrative of the game spins around your sadistic God-like father giving you the missions and then inevitably insulting your performance. I can’t think of a game that works as a better metaphor for religion than this one.

The thing is, though, that for all its quirks as you play, soon enough you’ll start to actually embrace it all. Frustrations and all. Enjoying Katamari Damacy requires that you cede some control over to it. It’s a genuinely authored work, and where most video games try to make the player an author of equal standing, Katamari Damacy wants you to experience it on its terms. This is a necessary side-effect of its pure surrealism; it’s an art movement where author intent is critical to its value. At first the game may well frustrate you, but a beer or two later you’ll have surrendered yourself completely to it, and then you’ll come to the realisation that it all had to be done this way. 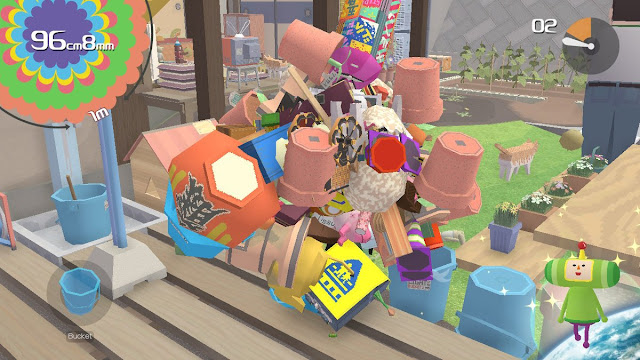 There is nothing like Katamari Damacy out there. The original came out with the PlayStation 2, and since then other developers have either been too terrified to try and put their spin on it, or had too much respect for how brilliant it is to even try. It obviously very niche, and as with any other example of surrealism, a lot of people are going to completely miss the appeal of Katamari Damacy Reroll. Polarising as it might be, it’s something everyone should try, because it’s also the perfect example of how games can be used to a genuinely artistic outcome.