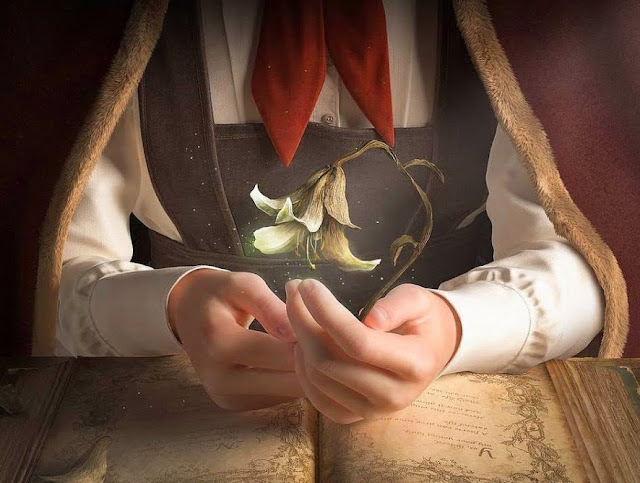 FromSoftware, best known to us for its Dark Souls formula, likes to be subtle. Part of the appeal of the Dark Souls series is how little they give players up front, challenging them to instead piece together the rich, deep lore through their exploration of the world. The developer’s first VR title, Déraciné, is very much cut from the same cloth.

Cut from the same cloth, but cut in a very different way. If I was to characterise what really made the Souls games so special, it would be in the way that they play with the concept of space. The intricate labyrinths and the way that they twist in on themselves are incredible to simply explore, and the way that the environment design is able to contain so many secrets is exactly why players have enjoyed piecing the lore of those games together over so many years now.

Déraciné, however, is a play on the concept of time. You play as a faerie, who exists between moments of time, and only has the ability to “leap” from one period of time to another, significantly further down the track. This faerie finds him/herself in a large, beautiful old English boarding house, following the lives of a few children and the headmaster. As to why the faerie’s there… well, it wouldn’t be a FromSoftware game if that was immediately obvious. 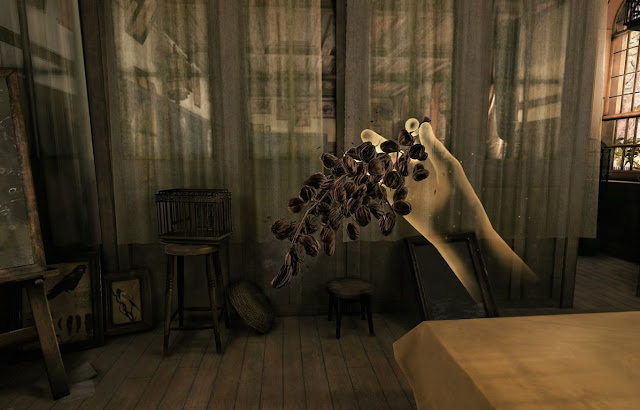 Because the faerie is a traveller through time, and only able to exist within a moment, however, affects how you’re able to witness the lives and events of these characters. From your perspective they are all frozen in place, and because you’re invisible to them (because from their perspective you exist within the split of a second from their perspective before fluttering back out of existence), your ability to interact with them is limited. It’s possible to do something minor to announce your presence (such as pull a handkerchief out of a hand, or rattle a box), but otherwise your interactions are actually limited to the character’s thoughts and memories – a little glowing orb sometimes appears around a character, and by touching that, you’re able to hear what that character is currently thinking.

What happens in the gaps between the moments that the faerie exists in needs to be pieced together by wandering around and seeing what has changed from one “chapter” to the next. In true FromSoftware style, nothing is so straightforward as to allow you to simply catch yourself up. You need to pay careful attention to changes in the environment, and hang off every word that the characters think or say in order to get the full picture. Déraciné is a low-paced point-and-click adventure game, when boiled down to its components. It’s also relatively short at about a half-dozen hours, but it’s demanding of the player’s concentration, and also something you’ll probably need to replay, because you’ll probably miss something the first time around.

Déraciné is deceptive in that at the start it seems to be offering a quaint story in the tradition of the likes of Enid Blyton, C.S Lewis, or P. L. Travers. The distinctly British architecture, characters (accents and all), and the games and activities that they get up to early on are all almost dogmatic in tone and aesthetic to those very English things. 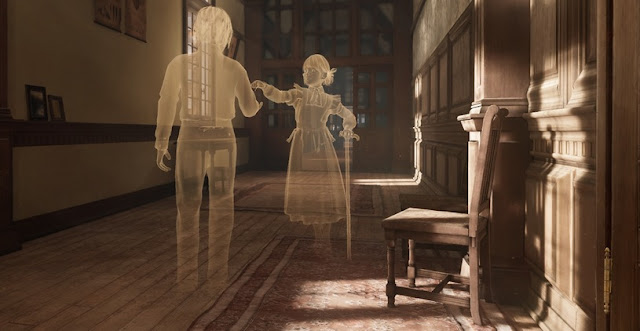 But then things start to happen that remind you that FromSoftware’s stories are never simple, bright, or quaint. No, Déraciné goes to some very dark places, and because of the way it handles the concept of time, it has a habit of being quite confronting about the speed in which these disturbing things happen. I’ll give you an example from the first two chapters, so there are no spoilers to the big revelations; in the very first moment of time, one of the characters enlists your help with tracking down some bitter herbs to play a practical joke on everyone by messing up the flavour of a stew. There’s a sense that not everyone is perfectly happy with life (one girl needs a cane to walk, and a boy obviously finds that distressing and wants to help her recover), but overall it doesn’t seem like anything’s going on beyond kids being kids.

Then you’ll jump to the next moment in time, and one of the first things you’ll notice is that you’ve now got access to a chapel room, and in there one of the children has set up a little shrine to a dead mouse. Then you’ll remember that one of your key abilities as a faerie is to breathe life back into things by taking life out of other things, and it’ll suddenly twig that perhaps this game won’t be so innocent after all.

Déraciné does go some pretty dark places, and because of the way you jump through time, you largely skip any of the build-up to the revelations, and as such the game has a habit of hitting you with all the shocking moments that have happened in the interim between “your” moments all at once. It’s by no means a horror game, but it’s certainly a game that can be emotionally and morally challenging, and has that distinctive FromSoftware melancholia that we’ve seen in the Souls games previously. 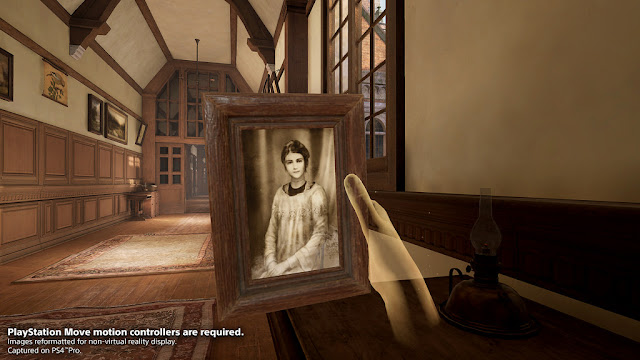 While PlayStation VR is mandatory to play Déraciné, it’s hard to shake the sense that that’s because Sony wanted something of a high standard that was exclusive to VR for the upcoming Christmas shopping period. There are a couple of little puzzles that make good use of VR – for example, one of the challenges in the game is to find a number of golden coins that can be placed in a mysterious box, and these coins are well hidden. The first one I found by physically looking into a hole in a tree, and that Easter egg hunt just wouldn’t be the same in a conventional game with a conventional camera. For the most part, though, the VR is used to ambient effect, which works, though at the cost of a lot of people not being able to play this game at all.

It’s a pity that everyone that doesn’t have a VR headset will miss out, because Déraciné is really quite remarkable. It’s rare that a game developer has attempted to make time a thing to explore to the same extent that we usually explore space in games, but FromSoftware succeeded there, and esoteric as it is, the darkly emotional story that is spun around Déraciné’s unique structure makes for something truly compelling.