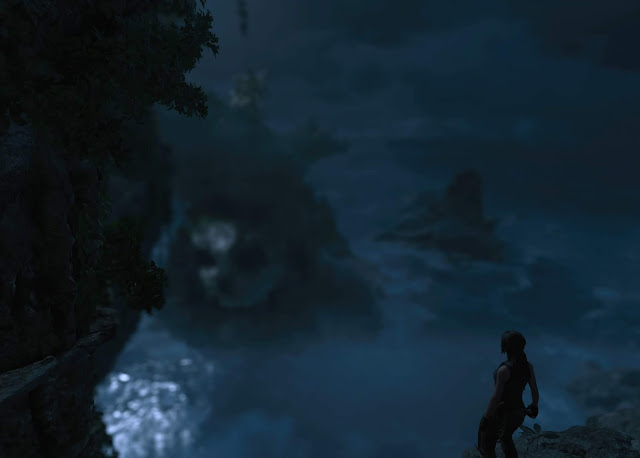 I’ve hold the most recent Tomb Raider reboot series in high regard. While the games are often compared to the Uncharted series, the Tomb Raider series has done a much better job of creating a sense of exploration and wonder, which I’ve found the Uncharted series struggles to do through Nathan Drake. That’s not to say that Uncharted is a bad series, but when looking at the similarities between the two series, Tomb Raider really does such a wonderful job of creating an impression of what it must be like to explore the ruins of antiquity.

I mention this because it’s the Uncharted series that generally gains the accolades from critics and fans alike, and Tomb Raider as a series often falls by the wayside. Uncharted 4 gained a 93 Metascore while Rise of the Tomb Raider “only” achieved an 88. This isn’t a huge difference by any stretch, but in my view, comes across as a case that flash rather than substance wins people over.

All that aside, Shadow of the Tomb Raider is a breathtaking game. I couldn’t believe the level of detail right in front of my eyes when the opening menu popped up on my screen and showcased a set of very detailed ruins within a lush, green jungle. It was even better during the opening cinematic, where Lara’s skin stretched around her neck muscles as she took a deep breath, as well as the natural flow of Lara’s hair over her shoulders when she turns her head. When it comes to realism, Shadow of the Tomb Raider is right up there as one of the best games I’ve seen graphically. As a bonus, the game doesn’t make my PlayStation 4 Pro sound like an airport every time I boot it up, unlike a certain other well-regarded game that came out earlier this year. 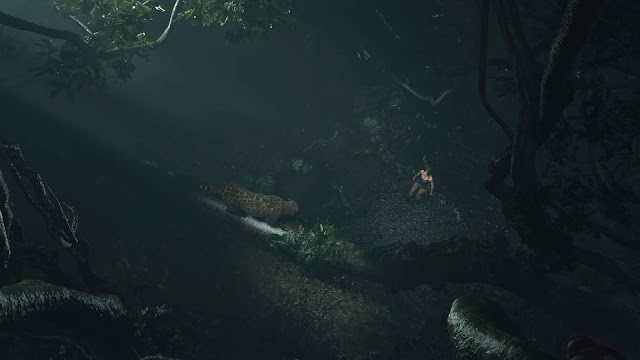 More often than not, I only mention how good something looks graphically in passing, as it usually isn’t hugely important to me unless it contains a certain artistic aesthetic. For Shadow, I praise it mostly because it adds a lot to the immersion of the game. Set in Peru, the game captures a lot about the local communities, villages and jungle life. I found myself travelling around Peru, just looking around, exploring every nook and cranny. The screenshots in this review were done in photo mode, and I wish I could show off so much more of the game, because they only scratch the surface of just how impressive each new area was to explore.

The photo mode itself is not quite as impressive as other games such as God of War and Horizon: Zero Dawn. There are your standard zooming and rolling options, as well as some filters and borders. There honestly isn’t a lot more to it, but luckily the game has a lot of opportunities for photography, so expect to see a lot of shots shared over social media. There are quite a few facial expressions thrown in for Lara as well, and depending on different situations she is in, can create some amusing photo opportunities. Seeing Lara smiling nervously as a leopard is in mid pounce over her shoulder provides a few chuckles.

The gameplay is overall a very solid experience as well. Lara swims, runs and climbs through a number of tombs, and many of her abilities return from previous games. Lara can use her grappling hook, dig into walls in order to climb them and use ropes to cross large ravines. Lara’s skill tree this time looks more like a periodic table, where selecting a certain skill will unlock the surrounding skills to pick from next, which makes it easier to select bigger and more useful skills earlier on. There are skills that can be earned by completing Challenge Tombs as well, so it’s well worth exploring everything in order to help Lara reach her full potential. 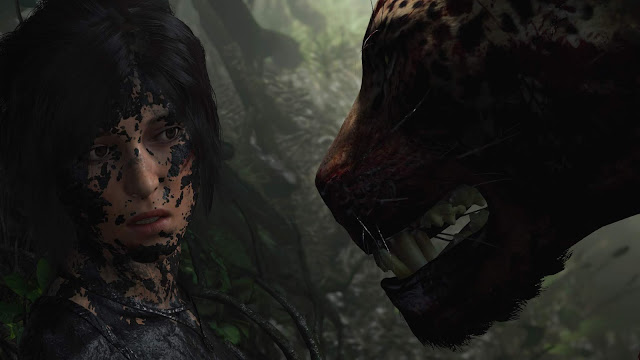 The narrative of the Tomb Raider titles have never been a huge selling point. Unlike the Uncharted series, these have often felt more like playing a game instead of interacting with a movie. Set months after Rise of the Tomb Raider, Lara and her friend Jonah (who weirdly looks nothing like he did in Rise) are still on the trail of Trinity, the paramilitary organisation searching for ancient powers to assist in their quest for world domination. The game begins in Cozumel, Mexico, where Lara finds a dagger and an accompanying warning of an upcoming apocalypse known as the Cleansing. Lara takes the dagger against her own better judgement and feels an unknown force. Soon afterwards, the town is awash in a tsunami which destroys the whole city of Cozumel. Questioning whether or not she started an apocalypse, the narrative takes Lara and Jonah to Peru where they set out to prevent Trinity from gaining any additional power. It’s almost a cut and paste job from the previous Tomb Raider, but it fits due to the cat and mouse nature of Lara vs the whole Trinity organisation.

On top of having to fight Trinity, Lara is met with an unknown force in the jungle that is taking out members of Trinity left right and centre. There are also moments when tackling Challenge Tombs where Lara is avoiding traps set out by the inhabitants of the jungle as well. For the first five or so hours spent in Peru, Lara only catches small glimpses of what is causing the chaos in the jungle. It captures a lot of the horror elements of movies like The Predator really well, in that it inverts the typical expectation where daytime means safety. In Shadow of the Tomb Raider, it has been flipped so daytime jungle is tense and terrifying.

There are several side quests interwoven into the game. Though not entirely new to Tomb Raider, the side quests feel more along the lines of showing Lara as an empathetic force to be reckoned with. The first side quest has Lara investigating a slavery ring where a number of mercenaries had promised payment to the locals to dig up ancient relics for them to sell on the black market, only to not follow through with payment. As an added problem, the mercenaries had decided to take children from the locals and make them work, or their families would be threatened. Lara takes this into consideration and helps out the locals by taking out the mercenaries for them and saving the son of one of the workers. It’s not perfect, as Lara probably didn’t have to simply kill everyone to solve her problems, but it shows an added layer to her character that wasn’t present in the first two games. 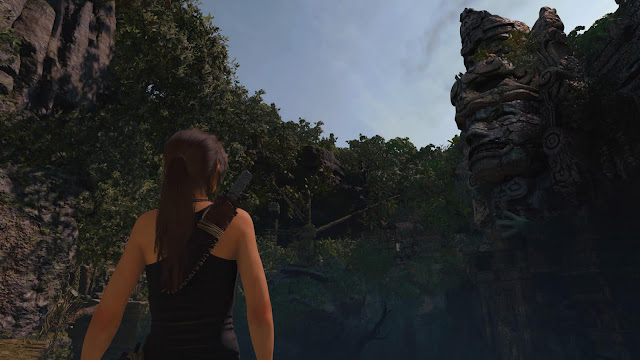 The game isn’t without its faults. Lara still has a problem with her Survival Instinct. With a hit of the R3 button, Lara’s surroundings lose a bit of colour, and items of interest turn a bright shade of orange for points of interest, and bright blue for quest items. This is also the only way to bring up the waypoints so Lara knows where to go next. The problem that has been present in the series but not addressed here is that there are hundreds of things to find in each area, and waypoints aren’t always clear. This usually leads to mashing the R3 button every few seconds, as it wears off as soon as Lara moves. It becomes very infuriating and takes the player completely out of the immersion. Another aspect that took some of the immersion away is the option to have the locals speak their native tongue. This sounds very good in theory, but all this ended up doing was have Lara speak in English to someone, only for them to speak their native tongue when replying and having both characters understand each other completely somehow. It might have been nice if Lara spoke even some broken Spanish or something to get her messages across. I ended up just turning it all to English, just so it didn’t look silly.

The difficulty and accessibility options are a complete godsend. Holding down a button instead of mashing it is becoming a standard in these games and remains welcome in Shadow of the Tomb Raider. There are also separate difficulty options for combat, exploration and puzzles. Combat is self-explanatory, while accessibility in exploration means the addition either minor or obvious white paint to objects to show where to go next. Puzzle difficulty determines the amount of help Lara will give the player. The easier the difficulty, the more she’ll let the player know what to do when facing a puzzle. It’s a unique way to adjust the gameplay to suit the style of the player, and I really hope this becomes standard in the future. The only thing I would add to it is perhaps give a soft glow to objects in easy mode for exploration, just so I don’t have to mash my R3 button for Survival Instinct so often.

Shadow of the Tomb Raider isn’t as good as the original reboot, but feels more like a complete package than Rise of the Tomb Raider offered. Peru is represented beautifully, and with some jaw dropping landscapes coupled with very detailed character models, Tomb Raider remains an immersive adventure with just a few faults keeping it from being a true great. This is a fitting end to the most recent Tomb Raider series, but I do think it’s time the series got a rest before hopefully getting another fresh look at some point in the future.

On Metal Max and going all in on JRPGs