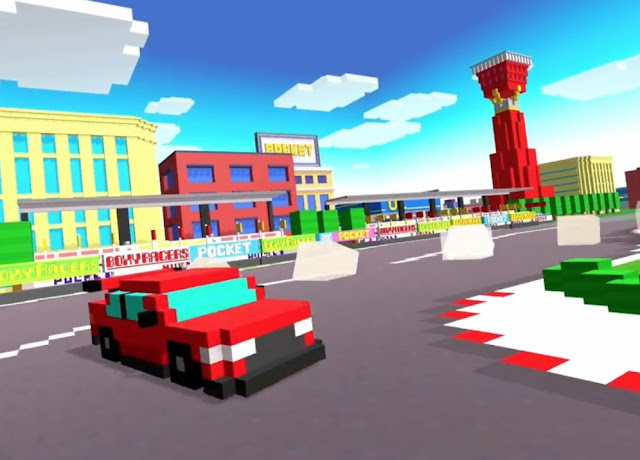 Party games are in a weird spot on the Nintendo Switch at the moment. The console is ready-made for them with its portability and ease of sharing controllers, and developers of all kinds have answered the call. Chiki Chiki Boxy Racers falls square into this category – it’s a top-down racer with slippery physics and great game-feel, with fanciful graphics and lots of game modes. It’s also the third top-down racer I own on the Switch (after Gotcha Racing 2 and the Neo Geo game Over Top) and the fifth party racer overall.

The benefit and downfall of nearly all party games is that they are mechanically simple and easy to explain. A good party game can take a new player and have them winning rounds within minutes, and Boxy Racers achieves this with its two control schemes: Stick and Handle. In Stick mode the car drives towards the direction you point your joystick, which is easy to understand and leads to depth in the game’s various hairpin turns. Handle functions similarly to other top-down racing games, you get a dedicated accelerate button and turn by moving the joystick left and right. Players can pick whichever way works for them, and it’s easy to figure out the ins and outs of the control scheme.

Boxy Racers is a lean package, featuring 12 unique tracks and four party game modes. The tracks are well varied and each one is over in no more than two minutes, so as to never overwear their welcome. Each one is simply designed and easy to follow, there are no split paths or confusing gimmicks aside from a few jumps and obstacles in the later stages. This short stage count makes sense considering what this game is going for – with its short runtime and focus on quick bursts of multiplayer play, it would be of little benefit to include a wealth of tracks. That being said, the game’s three divisions of City, Jungle and Beach do still start feeling a little samey after a while. 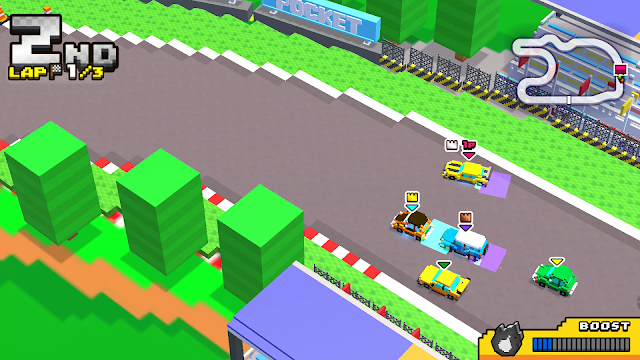 The variety of cars is very good and allows players to differentiate between each other by whether they’ve chosen a formula one or a school bus. Every car is capable of winning, whether it be through cornering well and managing boosts, or by outspeeding the competition in the long stretches. I didn’t have much trouble in the single player modes with any car, which is a good sign that things are well balanced.

The main differential between slower and faster players in this game is definitely cornering ability – the drifty controls take a little while to become attuned to, and each car has its own distinct feel. You can also override your turning momentum by using a boost, which will send your car to max speed at the direction you are pointing – a great way to cut corners or right yourself mid-drift.

The racing modes allows for up to eight players to connect together on the same Switch, through local play, or through online play. The single Switch mode is interesting as it doesn’t use split screen – instead players who fall far enough behind that they’re not visible get teleported towards the leader. Unfortunately there’s no way to “mix modes” so to speak – you can’t have three players on one Switch and another two on their own consoles in the same room – if you want to play multi, everyone needs their own console and copy of the game. 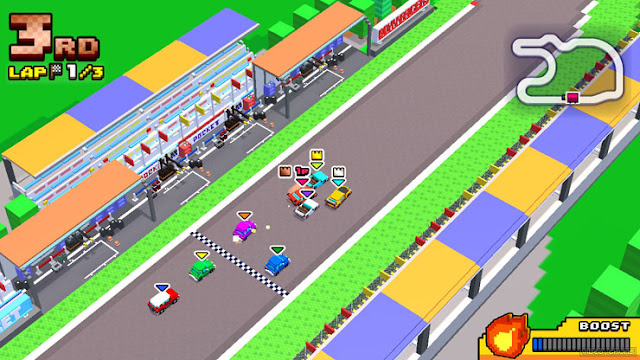 The Party modes add a little spice to the game once the racing grows dull. Coins will have you skidding around collecting points, while Smash tasks you with knocking other drivers off a platform while avoiding falling off yourself. Paint will see players drifting around to cover a space with their own team colour, while Goal is a fully fledged car soccer game akin to a top down Rocket League. Each of these games recontextualises the slippery, drifty controls for their own precise purposes and can be a riot with the right group of people.

While it doesn’t offer a whole lot to do and risks getting overshadowed by bigger party racers like Nintendo’s own Mario Kart, Chiki Chiki Boxy Racers is good for an afternoon of fun with up to eight players. It doesn’t overstay its welcome and it’s simple enough that players of all ages can immediately understand the controls and goals. It’s a game built to be shared and passed on – and while it’s not going to be memorable or become a party mainstay, it’s still a whole lot of fun while it lasts.