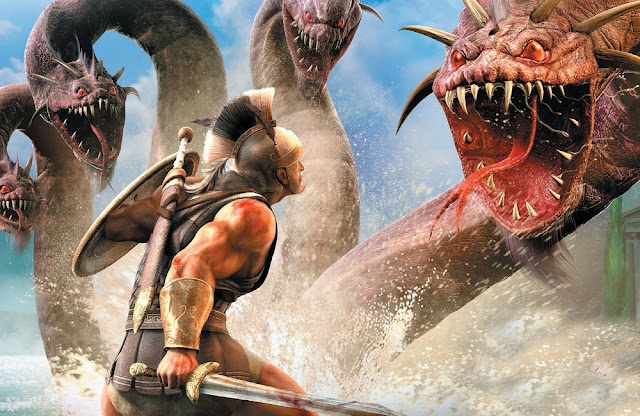 Titan Quest is one of the better “Diablo clones” to come out in the wake of Blizzard’s hit action RPG. Originally released in 2006, it sticks closely to the hack-and-slash combat and deep character customisation that came to define the Diablo series, but trades the hellish setting for one of classical mythology, taking players on a journey through ancient Greece, Egypt, and China as the hunt a series of rogue titans.

It’s a solid game with plenty of excitement to offer, and that remains true in its jump to Switch—a console that’s relatively light on Diablo clones despite its extensive library. A reworked control scheme does a great job of bringing a game originally made for mouse and keyboard to a handheld system. The inclusion of local multiplayer is a nice touch, though you’ll need a second controller or set of Joy Cons to use this mode.

Titan Quest casts you as a warrior from Helos, tasked with investigating a surge of monster activity. As it turns out, a group of titans—long since imprisoned following their defeat at the hans of the Olympian gods—are fighting to break free, and they’re the reason for the sudden abundance of harpies, myrmidons, centaurs, and other such mythical beasts. Naturally, you have to put a stop to them, taking you on a journey across ancient Greece, Egypt, and Asia. 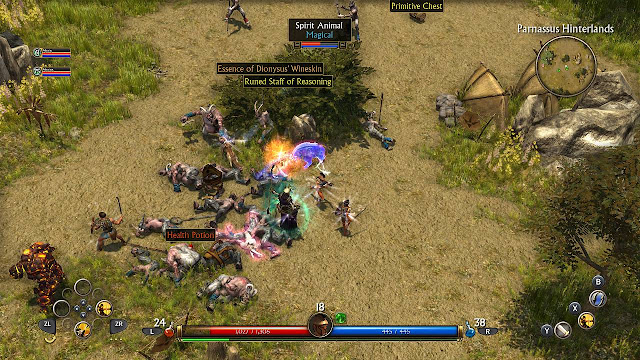 Honestly, the plot itself is not particularly interesting—a problem not helped by tiny dialogue boxes that are difficult to read and scroll at a glacial pace. But the story is, frankly, inconsequential beyond laying down a gorgeous and inviting setting to take your hacking and slashing to, and in that it works wonders.

And, of course, that hacking and slashing is the main appeal in Titan Quest. It plays it close to the classic Diablo formula, with a simple combat system that mostly involves mashing away on the Y button to carve your way through hundreds of enemies that assail you. There isn’t a lot of depth in the basic combat itself, but the isometric perspective gives you a wider view of the battlefield than your typical action game, which is something you can (and will need to) use to your advantage, lest you get overwhelmed.

Much of the depth and excitement in Titan Quest comes from levelling up your character, learning new skills, and collecting an inordinate amount of loot. A wide range of different skills are available to you through different “masteries”, which are this game’s version of character classes. Warfare mastery focuses on melee combat, Nature on defensive and support magic, Hunting on ranged combat, and so on. 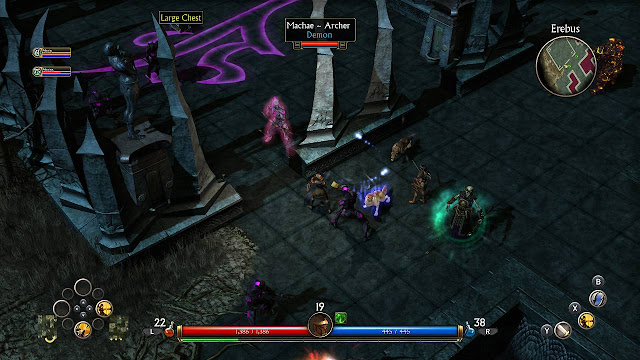 You can optionally pick up a second mastery at level 8, giving you more versatility but stretching your skill points more thinly. It’s really up to you how you approach the system, but with nine different masteries (and some 45 different combinations thereof), there’s a lot of opportunity to explore different builds. As a nice cosmetic touch, there’s a unique class name for each combination of masteries: Rogue and Dream makes you a Dreamkiller, Earth and Warfare makes you a Battlemage, Spirit and Nature makes you a Soothsayer, and so on.

Your mastery selections don’t affect what loot you can use, though each one is obviously geared towards different items—you can run a hunter with only melee weapons, but that’s probably not a good idea. Instead, gear is locked behind stat points, which you manually assign when you level up, but these naturally align with the stat goals of different builds. If you’re playing a caster, you’ll want a lot of intelligence, which is also the main stat requirement for staves, one of a caster’s weapons of choice.

And yes, in true Diablo clone fashion, you’ll be awash with loot. Most of it will be good for nothing but selling, but every now and then, you’ll find something special that hits just those stats and special effects you’re gunning for. That said, your character’s bags are tiny, necessitating far too many trips back to town to unload your stash—we’re talking every couple of minutes. Even with the ability to teleport directly to town from just about anywhere in the game, and return to where you’re left when you’re done, these trips back grow incredibly tedious. Things ease up a little once you get additional bags, but that’s not until a good 10 hours into the game. 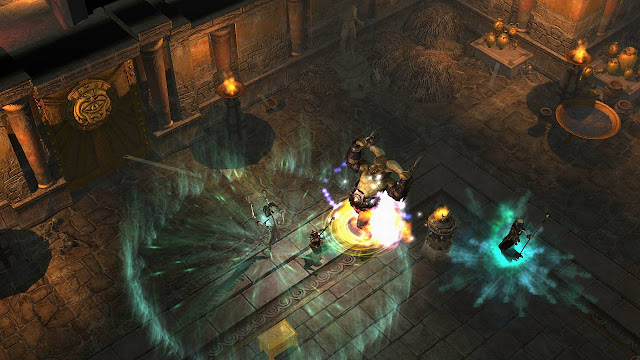 Oddly enough, the Switch version doesn’t make use of the touchscreen at all, despite the game previously being ported to mobile (by a different publisher, admittedly.) The control scheme works as well as it can for a game initially designed for mouse and keyboard play, but I can’t help but think that the touchscreen could have helped streamline things further. It’d be particularly helpful with targeting, which is currently handled by an auto-lock-on system that you can override by holding the attack button and moving the left stick to cycle through foes.

The tutorials also need some work, particularly when it comes to the game’s many helpful control shortcuts that are seemingly undocumented. You can, for example, just hold the attack button to continuously swing your weapon, rather than mashing it, and holding A near a pile of loot will bring up a window where you can bulk collect all nearby items. These are really handy things to know, but the only way to learn about them in-game, as far as I can tell, is to stumble upon them.

A much bigger source of frustration is the a litany of bugs makes playing Titan Quest on Switch a much bigger ordeal than it should be.

On one end of the scale, there are fairly benign (if annoying) graphical glitches. It’s not unusual for NPCs to vibrate in place like they’re sitting on an especially powerful bedroom toy, and “texture pop-in”—where a grey silhouette of some aspect of the environment spawns long before the textures that give it colour and depth—is common enough to be a distraction. 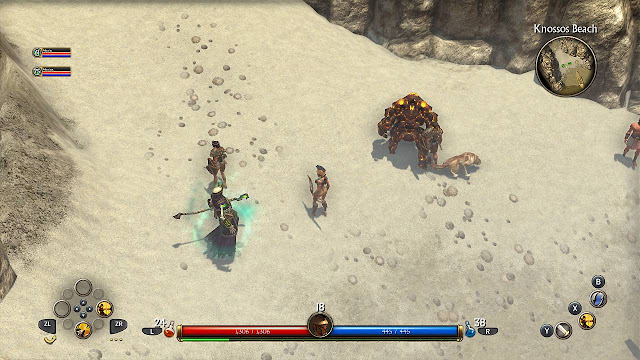 But the far more serious bugs are the ones that interfere with the ability to play the game. If you press the A button too much while moving—something you’ll do a lot, since that’s the “pick up loot” button—your character while simply stop in place, unable to move until you let go of the controls entirely.

A couple of times, I’ve had the menu cursor get stuck forever scrolling down, making it impossible to use or sell any items other than those on the bottom row of my inventory. (And yes, I checked the Switch dashboard—this was only happening in the game, and persisted through power cycling the controllers). I’ve had my pet suddenly become untargetable when I try to heal it, and also had my target get permanently locked to the same pet when I tried to cast a healing spell on myself.

I’ve had a couple of outright crashes, and while Titan Quest auto-saves often both that this doesn’t cost a lot of progress in terms of experience points and items gained, it does send you back to the last town you visited and respawn all enemies. It can take take a good hour to slowly carve your way through the hordes between you and the next camp, so when a crash undoes all that, it’s a frustrating thing indeed. 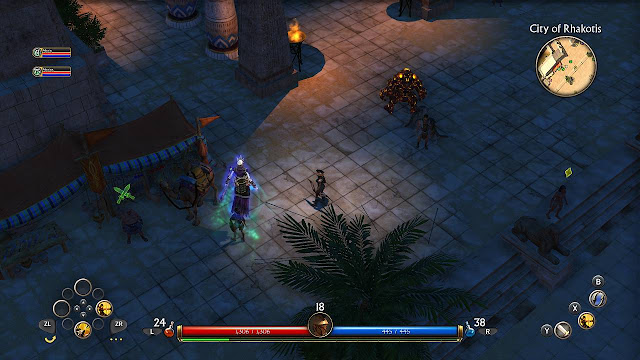 That’s a shame, because when everything’s working smoothly, Titan Quest is a very enjoyable game. It doesn’t push any boundaries (it’s more than a decade old now, after all), but it runs the classic Diablo formula well, with plenty of depth for character builds and a stunning world to explore. It’s a great fit for Switch, where you can idly grind while watching TV or riding the train, or set the console up in tabletop mode for some co-op action wherever you may be (so long as you have another controller handy). Just be ready to fight through a lot of bugs to get to the enjoyment underneath.

Spirit of the North has a fox and it’s gorgeous