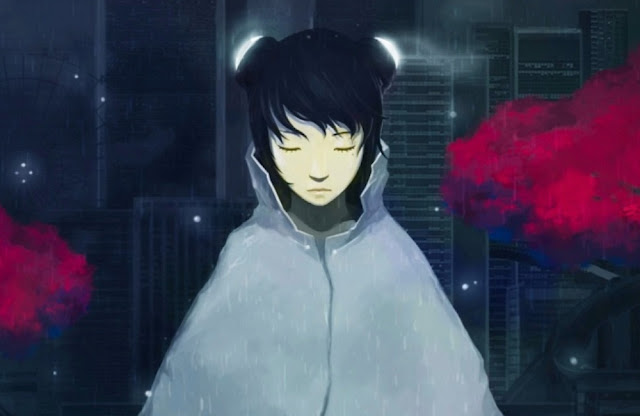 Flood of Light is one of the most beautiful games I’ve played in a long time. Set in a future where endless rain has flooded the world and wiped out humanity, it paints a vision of an oddly calming dystopia: the rain beats down on the skyline of a flooded city; pink-flowered trees sit in contrast to the lifeless industrial backdrop; small pools of bright light cut through the murky darkness of an endless night. It all looks more like a piece of concept art than a typical game.

Your role among all this is as The Guide, a human-looking spirit tasked with finding and lighting eight pillars of light. Doing so seems to be the only way to save the robots that now populate the city in the wake of humankind’s departure; indeed, The Guide’s appearance is the stuff of prophecy among robotkind.

There’s a lot more to the plot than this, though it’s difficult to make sense of due to an awful translation job. Terminals throughout the game fill out a backstory about how this so-called Hope City got flooded and the efforts of the last remaining human to save the “Luz”, whatever they may be, but the English script is borderline gibberish. I’ve read Google-translated things that make more sense. 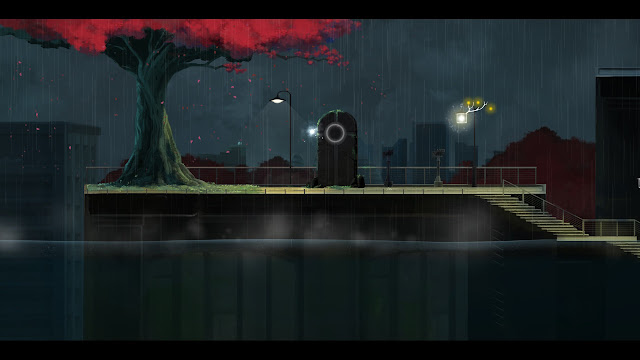 Fortunately, Flood of Light doesn’t really need its written story. This is a game that is carried almost entirely by its visual storytelling; you don’t need text to piece together a haunting story about environmental catastrophe, hope, desperation, humanity, and the good and bad that comes with technological advancement. Remove the overt narrative entirely, nonsensical as it is, and Flood of Light suddenly becomes so much more compelling.

Your journey through all this begins on the top of a highrise building—one of the few that still stands above the flooding. In order to find the eight pillars, you need to lower the water level, which is where The Guide’s unique ability to control light comes in handy. See, scattered across Hope City are mystical monuments that, when lit up, reduce the flooding just a little bit.

That then informs the central idea of Flood of Light’s core puzzle-platformer gameplay: you have to figure out how to get little orbs of light from one place to another, in order to light those monuments and open the path forward. Whenever you find a lamp that’s lit, you can absorb the light from it, and then transfer that light to any other lamps, monuments, or various other objects you come across. 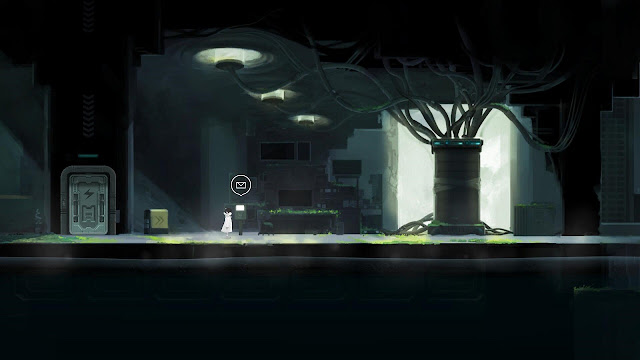 The catch is that you can only absorb or transfer your light so far. If you want to light up something that’s out of reach, you need to chain the lamps together, jumping the orbs from one lamp to the next—but only excess light can jump. It’s hard to explain, but here’s an example to give you some sort of idea.

There’s a monument on a higher platform, but there’s no way for The Guide to get there herself or reach it with her transfer powers. A line of three lamps stretches down from the monument to the lower platform that you’re on, though. By finding four orbs of light around the rest of the area, you can daisy-chain them up to the monument—transfer all four orbs to the first light, the excess three to the second, the remaining two the third, and then finally send the last orb to the stone.

From that basis, Flood of Light ramps up the complexity by adding new ideas with surprising frequency. There are light-activated elevators that’ll help you move around the map, lamps that move when you step on nearby switches, and special waterproof lights that you can send beneath the surface, to name just a couple of the new mechanics that you’ll soon run into. 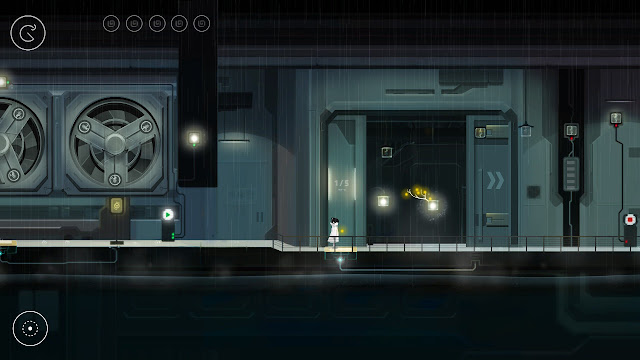 It all gets surprisingly complex; you’ll need a lot of lateral thinking and logical thinking to get the right number of lights into the right places at the right time. Solving the challenges that Flood of Light lays before you is tricky and occasionally frustrating, but like any good puzzle game, the moment when you land upon a solution is oh so satisfying.

If you want even more of a challenge, there’s a handful of optional objectives. Chief among them are special “wicks” to light up, which are harder to reach than regular lamps and make the rest of their surrounding puzzles harder by using one of your precious orbs. These are also the key to unlocking Flood of Light’s true ending.

On top of that, there are challenges for completing each level within a certain number of moves, and robots hidden throughout the game; if you find all wicks, wake up all robots, and complete a level within the least number of turns possible, you’ll get a coveted S ranking—but good luck doing that without a guide of some sort. 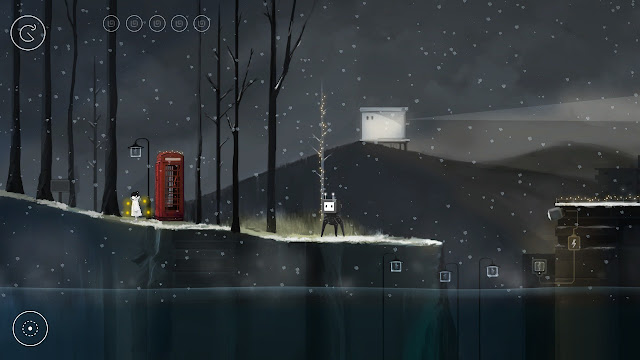 Like I said, it’s sometimes difficult to the point of frustration, which seems in contrast to the serene, calming mood brought about by the art direction and world design. It’s not a deal breaker by any means, but some sort of hint system wouldn’t go amiss.

Even if puzzle games aren’t your thing, it’s worth fighting through its obstacles and frustrations—or using a guide to carry you through, which I ended up resorting to—in order to experience Flood of Light’s beautiful, melancholic yet hopeful vision of a post-climate change world.