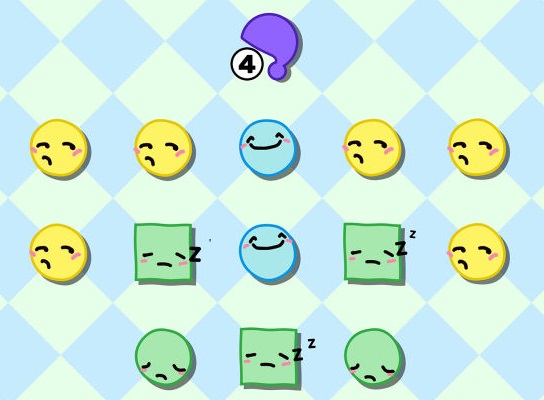 One of my great pleasures in life is sipping on a large cup of coffee and sitting at my dining table with a puzzle game to get my day started. It need only be half an hour or an hour of play time, but after this morning routine I feel pretty awake with my mind ready to work for the day.

Yuso is a new puzzling concept to me, I had never experienced something like it. It takes the concept of a clear the board style puzzle by matching colours in a unique way.

The player’ cute little avatar goes from planet to planet in our solar system, clearing each planet of the Yuso invasion. Yuso just so happen to be very round, adorable beings that look like they have no business taking over any planet let alone all of them. Apollo of all beings shows up and lets the player know that he was unable to deal with the Yuso plague himself and puts you to task in order to save the solar system from an inevitable cuteness overload, planet by planet. 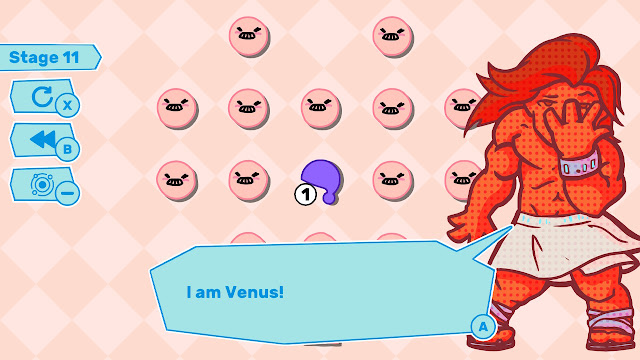 Each planet has their own ally who shows up at the beginning of their respective planet, and again when all puzzles are completed. Each character is named after their planet and they merely introduce themselves before asking you to destroy the Yuso, then congratulate you after every stage is completed. I see this as a missed opportunity for some additional dialogue and fleshing out of their respective characters, as there is a lot of charm that the artwork hints at, and as such, only seeing each character twice is a bit of a let-down.

Getting rid of the Yuso is a mixed experience. The player needs to clear each board by matching up similarly coloured Yuso. In order to do this, the player selects a Yuso, and if it has an identically coloured Yuso next to it, above it or below it, it explodes, taking down all Yuso of their own colour in the immediate area, including those diagonal to it. If a Yuso has a different colour, it changes to match the colour of the exploding Yuso. As an example, if you explode a yellow Yuso, it would take out all surrounding yellow Yusos, and turn any green, blue or pink Yusos nearby into Yellow ones as well. With the goal being to clear all the Yusos off the level, this colour swapping mechanic means that quite often the player needs to think two or three steps ahead in order to solve the level.

In addition, to keep the variety going strong, there are a number of obstacles that are introduced as the game progresses. Sleeping Yuso are square and require two explosions to be destroyed, and do not change colour until they’ve been woken up from that first explosion. Once a Yuso explodes next to one, it wakes up and becomes a regular Yuso. Bombs come in various colours and explode after a certain number of moves. Once the bombs explode, they function like an exploded Yuso, they will take out similarly coloured Yuso while converting others to its own colour. Sometimes this can help but is often a hindrance when planning out how to finish the puzzle. The nightcaps are the most frustrating of the bunch, they are only purple (so do not affect Yuso colour at all), and after a set number of moves, they put all Yuso surrounding it to sleep. This becomes a frustration because you cannot select the sleeping Yuso to explode. 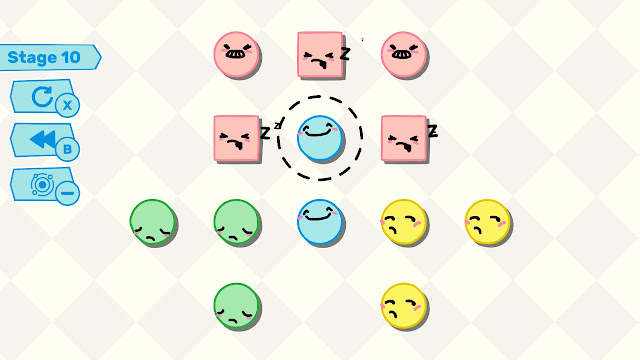 With all these obstacles in place, the difficulty of the levels spikes dramatically and all over the place. Oftentimes I met with puzzles that I simply could not plan out no matter how hard I tried. I initiated a lot of trial and error to get past these puzzles, only for the next five or six levels to be super easy again. I’m not sure there was any rhyme or reason for putting difficult puzzles scattered throughout the game rather than saving them until the end, or it could just be me not seeing the obvious. I strongly feel that a great puzzle game is one where the solutions aren’t obvious but can be found. Yuso doesn’t quite fall into that category. Thankfully, the developers may have noticed this themselves, as they included a rewind feature to help out when a wrong decision has been made. You can take back as many moves as you need, all the way to the beginning of the puzzle.

Another way to progress through the game when faced with a particularly hard level is the implantation of the progression system within the game. For each planet, the game does not force you to complete every level in order to progress to the next. For instance, if a planet has fourteen levels in it, you only need to complete ten to unlock the next planet. This is particularly useful when frustration strikes, and another puzzle may be able to get one out of a rut, enabling someone to come back with a fresher mind.

As a puzzler, Yuso is definitely a mixed bag. It has wonderfully cute aesthetics that are pleasing to the eye, Yuso is an attractive game for sure. The implementation of the puzzles leaves a bit to be desired, some puzzles feel very clever, some are very easy, and some are too difficult, to the point that they require trial and error to pass. Trial and error in a puzzle game is never a good thing in my view, and so, when Yuso is good, it’s very good, when it’s bad, it’s really bad.

Pathfinder: Kingmaker is going to be so awesome