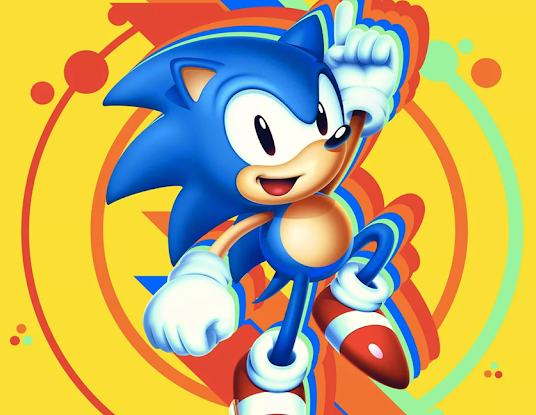 Sonic Mania Plus is just a repackaging of the original Sonic Mania with some DLC and enhancements, but the numerous touchpoints and improvements throughout take an already fantastic game and make it even better, and absolutely worthwhile to play whether you are new to the game or just looking for an excuse to take the blue blur out for another spin.

Related reading: Our review of the original Sonic Mania, on Nintendo Switch

After years of the Sonic franchise struggling to reinvent itself the way some of its platforming counterparts did, it was refreshing to see Sonic the Hedgehog return to its roots and remind us what made those older Genesis titles great to begin with. To its credit, SEGA has really done a fantastic job of late rekindling the nostalgic magic of its earlier games. Whether it was the SEGA Genesis Classics collection recalling the games of my youth or just putting a fresh coat of HD paint on the Shining series by bringing Shining Resonance Refrain to new regions four years after its initial Japan-only release, it has been really nice to see SEGA giving these old franchises some love.

Right out of the gates, there is something to the colourful visuals and the peppy soundtrack that greeted me in this game. My kids are teenagers now, growing up with the various 3D Sonic titles that often times fumbled their control schemes or tried to present new and ‘edgy’ characters (I’m looking at you, Shadow the Hedgehog), but even they understood that the classic side scrolling 2D Sonic games were the hedgehog’s best efforts. So what is Sonic Mania? It was a game that saw Sonic, Knuckles and Tails taking on Dr. Eggman and his Hard-Boiled Heavies. I mean, the story here was never the highlight, but what we had in Mania is in-line with series expectations. What is most important, and what the developers have done with this release, is focus on speed. The music is appropriately up-tempo, the sprited visuals are comfortably familiar, but none of these nostalgic presentation values would matter a lick if the level design was poor and the gampelay unappealing. Thankfully Mania really captures that crafty level design that certainly enables speedy play, but also at times offers the illusion of speed, which is just as important. There is a satisfying feeling that comes with Sonic’s pinball-like antics as he busts through walls or runs through a loop like a roller coaster on legs. This frantic energy, the understanding that the dozen zones need to have objects and slopes and enemies placed just right give the Sonic games their charm.

Not only did the development team figure out the best ways to utilise the abilities of Sonic and his friends, but they did a great job of creating different pathways through so many of the stages. This was always a hallmark of the older titles, where you had the freedom to go high, low or sometimes right on through the landscape and find the route that best suits your style of play. That the three characters all play differently from one another added a great wrinkle to the Mania formula that again reminded me of the old Genesis titles. Sonic is my favourite character to use because his uniquely speedy attributes are what made me fall in love with the franchise all those years ago, but the ability to fly with Tails or climb with Knuckles to reach spots Sonic himself might not be able to access.

But this is Sonic Mania Plus – and you can play this updated version of the game as a $5 expansion to the original or just pick it up complete as a package now if you missed the initial entry. So what does this DLC package provide? Well the most obvious content is the addition of two new characters: Mighty the Armadillo and Ray the Flying Squirrel. These new friends add new wrinkles to the formula as Ray is more of a floating squirrel than a flying one and Mighty seems like a more bruiser-ish Sonic. 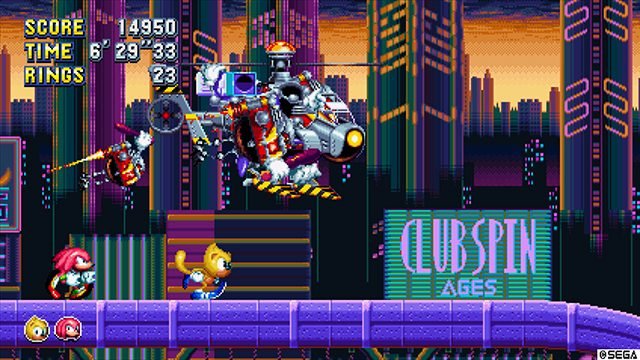 While the new characters are the most notable portions of the DLC, there are some additional items worth taking note of. The addition of a four player competitive mode is great if you have friends who want to jump in and race against one another. There is an Encore mode, which feels a bit like a Remix mode. It shifts the colour pallets a bit and mixes up the environments in small, subtle ways that do not fundamentally change the level structure, but do make you alter muscle memory a bit if you happened to get too good at the levels. Another core mechanic change is that you are not working with extra lives, but alternate lives. What I mean by that is you start Encore mode as Sonic, but instead of dying and restarting with Sonic, you have a swappable character that tags in as well. So you can shift between Sonic and Mighty, or if Sonic perishes you are forced to take on the reserve friend. It is a really cool wrinkle that sometimes made me reconsider my options mid-level because a misstep forced me to change characters.

If you enjoyed the original Sonic Mania, this Plus release should be an easy sell as it provides new characters and ways to play the game. If you missed out on it the first time, this is the perfect reason to pick the title back up and give it a go. This is the best Sonic effort in years as the developers managed to blend the things that made classic Sonic games so great in the first place.

SMASH! 2018 cemented the event as the best in Australia for fans of Japanese entertainment and games