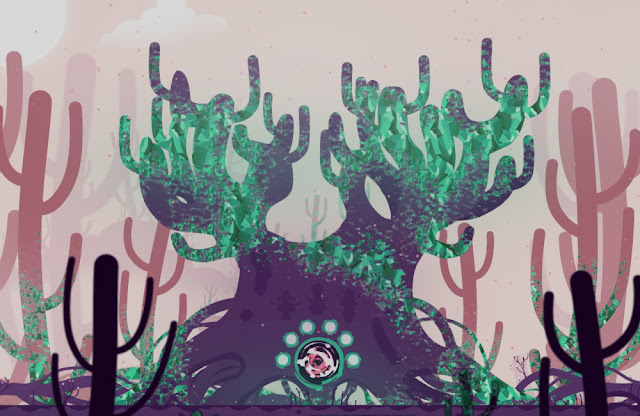 Semblance is easily one of the most innovative puzzle platformers I’ve had the pleasure of playing. In such a crowded genre, that’s a big deal indeed. It’s is also one of the most stylish games I’ve seen in a long time, and is yet more proof that solid art direction will always trump photorealism and “good graphics”.

Semblance takes place in a forest that, for reasons unknown, is being overrun by some sort of plague that’s encasing everything in crystal. As a little blob critter called Squish, your goal is to gather little glowing orbs littered throughout the forest, which are able to push back the crystalline corruption. Most of those orbs are way out of reach of Squish’s diminutive form, but luckily, they have a nifty trick up their sleeve: the ability to deform certain parts of the terrain by ramming into it.

Hit a platform from below, and you’ll push that section upwards, stretching it like playdough and causing a small hill to grow. Hit it some more, and the hill will grow taller; slam more hills up next to the original, and you can create a little plateau. With this taller platform, an orb that was previously out of reach suddenly becomes obtainable. 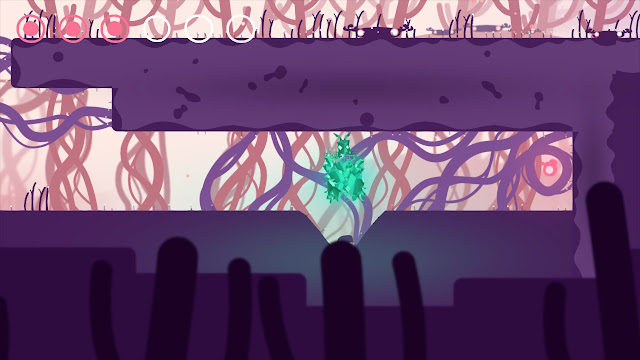 Likewise, you can slam downwards into the ground to create valleys, creating extra room to squeeze past an obstacle you otherwise wouldn’t be able to get past. Slam sideways into a wall, and you dig in a little Squish-sized cove that you can use as a stepping stone to reach higher sections; repeat this process, and you effectively scale a vertical cliff face.

That’s the basic idea behind Semblance, but where it really shines is in using those tricks to create some truly brain-bending puzzles. The trickier variants demand multiple steps, as you move some particular platform in some particular way to let you reach another, and another, and another. You can also reset platforms at the press of a button, which isn’t just a way of undoing mistakes, but becomes crucial to solving other puzzles.

And then, of course, Semblance adds new wrinkles over the course of the game to keep pushing those problem-solving skills. Lasers will kill you in an instant, but deforming the terrain can alter their angle or block them off entirely. Softly-glowing beams (not to be confused with lasers, though they look similar at a glance) are safe to walk by, but they’ll reset any terrain they come into contact with—which can be, again, both a challenge to overcome and a key element of solving another puzzle. 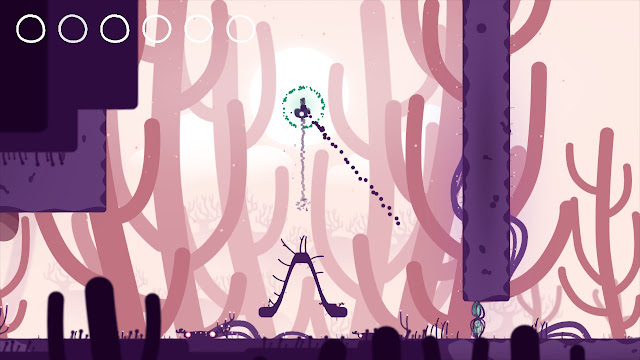 Later levels have pieces of solid crystal that can’t be deformed, but deform Squish instead. Slam a crystal from the side, and you’ll become tall and slender, letting you jump much higher but covering much less horizontal distance; hit a crystal from above or below, and you’ll squish Squish flat, limiting their vertical capabilities but greatly improving the ground they can cover laterally.

One of the most remarkable things about Semblance is how well it introduces all these new elements. There’s very little by way of tutorials—an introduction to the jump, slam, and reset buttons is all you get—but the game uses the puzzles themselves to clearly teach you how each new idea works. The first time you encounter the solid crystal, for example, is with a puzzle where you have little other choice but to slam into the wall, see what happens, and then test out your new high jump with the only other platform in the vicinity.

In saying that, the trickier puzzles can get incredibly frustrating. Semblance is good at introducing you to new mechanics and puzzle-solving techniques that use them, but they still require a great deal of lateral thinking. If you can’t immediately see a solution, or at least a vague idea of what a puzzle wants you to do, you can find yourself bashing your head against a wall aimlessly—one puzzle had me stumped for over an hour while I deformed its two platforms every way I could think of. Usually, going away for a bit and coming back with fresh eyes helps, but some sort of hint system wouldn’t go amiss. 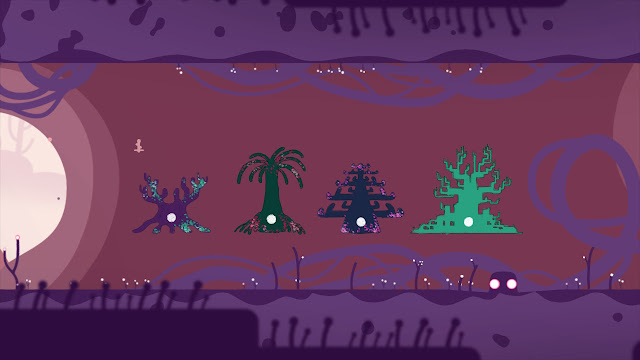 Semblance also suffers somewhat from Squish’s sluggish movement, especially when they’re flattened. For the most part, the game is about problem solving more than precision platforming, so imprecise controls don’t matter too much, but every now and then a challenge will demand the sort of pixel-perfect platforming that Squish just isn’t equipped to handle. Luckily, respawns are quick and death doesn’t send you back far.

While all this is going on, it’s hard not to get swept up in Semblance’s stunning art direction. It’s bright and colourful, but achieves this with a palette limited to greens, purples, pinks, and reds. That gives the whole game a unique sense of identity and atmosphere, and it brings Squish’s forest to life in a way that a more traditionally colourful—or more monochrome moodiness—could never achieve.

Likewise, the soft curves of the “natural” material and the sharp rigidity of the crystal make the environmentalist implications are clear, despite Semblance’s deliberate vagueness in terms of plot. Squish’s forest is being overrun by some sort of pollution, to the detriment of all the creatures who live there; by solving the puzzles and gathering up those orbs, you can push that corruption back and protect the natural world. In that regard, Semblance is simple, clean, and to the point. 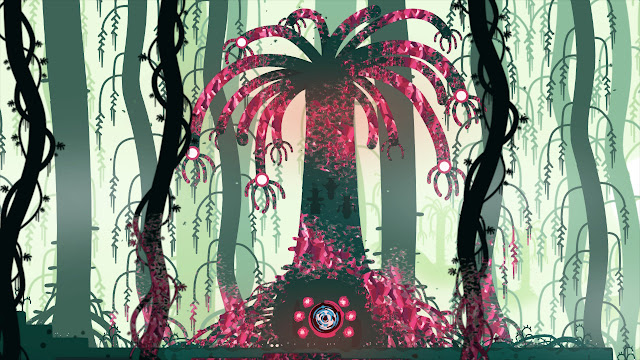 The playdough-like world carries a much more interesting message though, and it’s one of flexibility and understanding. Part of the forest’s beauty—and the very thing that allows you to move through the game—is its malleability. The world is soft, and nothing is set in stone. That changes with the crystal corruption, though; things become rigid and set in stone, unable to be moved or altered. Nobody can get by as an immovable object, and Semblance is a reminder that open-mindedness and flexibility are vital for navigating a world full of other people.

It’s a good lesson for approaching Semblance, too; you’ll need an open mind and some flexible thinking in order to overcome its ingenious (if sometimes frustrating) puzzles. Between that design creativity and the sheer stylistic beauty of it, Semblance is a game that’ll stick in my mind for a long time.