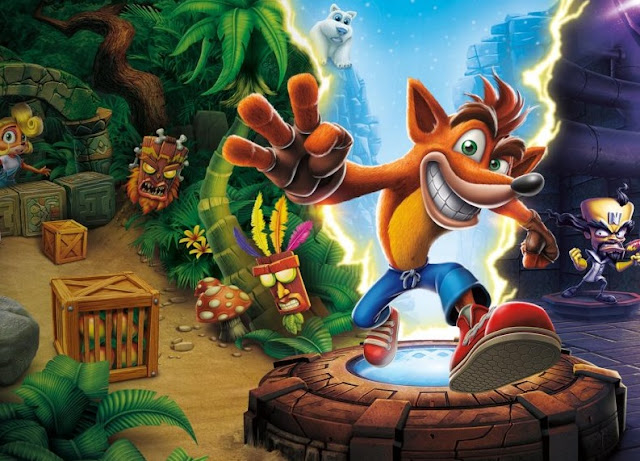 The word “nostalgia” is formed from the Greek words for “homecoming” and “pain,” and for good reason. A large part of adulthood is spent realising that things one held dear to their heart are actually largely trash. Films that were watched until their VHS tapes became damaged are revealed to be shallow, and one is typically left wondering how they were so entertained during a simpler time in their lives. This truth is why many nostalgia-based game releases ultimately fall flat, as they try to recapture magic that wasn’t really there in the first place. However, that isn’t always the case, and sometimes things are just like one remembered them.

After playing through the Nintendo Switch version of the Crash Bandicoot N. Sane Trilogy (which collects the three classic PlayStation platformers in one package), I realised that the series is all about mastering the fundamentals of the genre. You won’t see Crash pulling off crazy techniques or using his fists, but you will see him jump on enemies just like his 16-bit predecessors did. The core gameplay in all three titles is quite simple, as players never have to do much more than using their spin attack to destroy stuff and occasionally collect some jewels in order to progress through the game.

Most of Crash Bandicoot’s stages can be grouped into three different types: there are standard 3D levels where the player runs forward, spinning past enemies and jumping over various pitfalls, dramatic chase sequences that have the player running toward the camera (yes, Naughty Dog was doing this far before Uncharted), and more traditional platforming levels that basically turn the game into a 2D platformer (these are typically the ones that require the most precision). None of the level designs are revolutionary, and those looking for a more exploratory game will be disappointed by the linear design, but the core gameplay is solid enough to where it never becomes an issue. 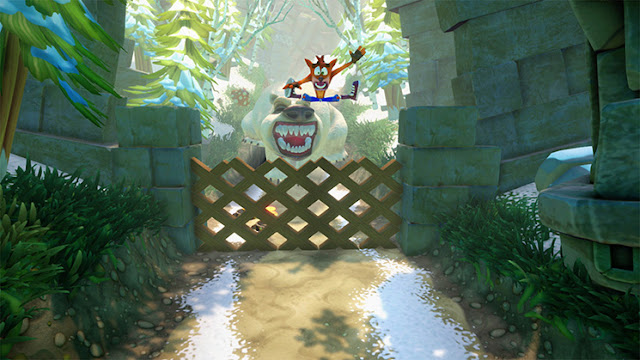 Things get slightly more complex in the sequels, as Crash is able to slide and pull off a few more advanced maneuvers. These add an additional layer of depth to the platforming, and help make it more enjoyable to get through the individual levels. That said, the Crash formula never really sees much of a shake-up aside from a few hit-or-miss vehicle levels that feel more like a gimmick than a real addition. Still, there’s something to be said of not altering what’s not broken, and it mostly results in a satisfying trilogy from start to finish even if it never really innovates.

One constant throughout the three games is that the action really shines during the boss encounters. Coming after every five or so levels, these single-room encounters are tense affairs of pattern recognition combined with some fun mechanics (such as setting off exploding boxes filled with dynamite). By separating the fights from the platforming levels, it serves as a nice break to the action, and a solid challenge before the player is rewarded with additional stages.

Not much is new with the Nintendo Switch version of the N. Sane Trilogy, but it does come with the game’s latest update, which adds in one additional level that wasn’t found in the original titles. Included in Warped, the stage “Future Tense” is a highly difficult test of platforming precision set in a futuristic city that wouldn’t look out of place in a Ratchet & Clank game. It shows that developer Vicarious Visions clearly understands what made the original trilogy enjoyable, and is a great glimpse at what a new entry in the series could look like. 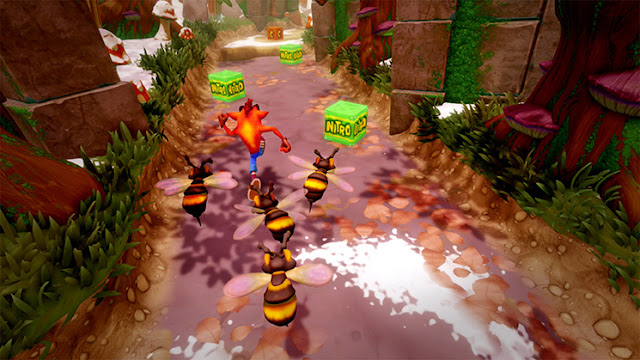 Beyond that, the N. Sane Trilogy is a totally faithful port on Nintendo Switch. The graphical quality is a step down from the PC and console versions as there’s obviously no 4K support, but who really needs to be able to count the individual pieces of hair on an anthropomorphic bandicoot? It stills looks plenty colourful, almost reminiscent to the Saturday cartoons of yesteryear, and the more muted visual fidelity actually goes well with the nostalgia-based package that the N. Sane Trilogy ultimately is.

While the Nintendo Switch version of the Crash Bandicoot N. Sane Trilogy may not look quite as dazzling as its counterparts, there’s no denying that it’s bolstered by being available on a portable system. The levels in Crash Bandicoot can typically be ran through in a minute or two (as long as you’re not dying repeatedly), so they are really the perfect fit for some pick-up-and-play gaming sessions. Getting through the three titles on the go proves a much more enjoyable experience than staring at a television for hours on end, where the gameplay can start to feel overly repetitive. Ultimately, this port helps hides some of the more dated gameplay elements of Crash Bandicoot, and shows that the future can be quite bright for the former gaming icon.

Spike Chunsoft is localising one of the oldest visual novels ever