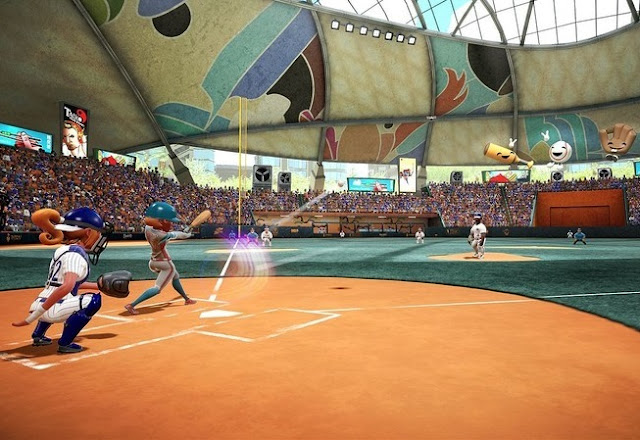 Baseball games seem incredibly few and far between these days. During the 1990s we were blessed with multiple takes on the sport. Series such as Hardball, Bases Loaded, Baseball Stars and All-Star Baseball only scratch the surface of the amount of baseball games available, both simulation and over the top varieties healthily represented.

Fast forward to the 2010s, and we have seen 2K drop its Major League Baseball license, leaving us with a precious few alternatives to Sony’s MLB: The Show series. For the most part, these titles provided us with a compelling look into simulated baseball. Though seemingly out of nowhere, a game called Super Mega Baseball came out in 2014 and shook things up a bit, harking back to the olden days of over the top baseball games with a new modern twist. Four years later, we have been blessed with a sequel, Super Mega Baseball 2.

The original game was lauded for being an easy to pick up baseball game that was also incredibly fun. This sequel successfully follows this up by offering more of the same, and adding a few requested features in. There are a few tiny niggling things that prevent me from giving it a full score, but it’s easily one of the best baseball games I have played in years. 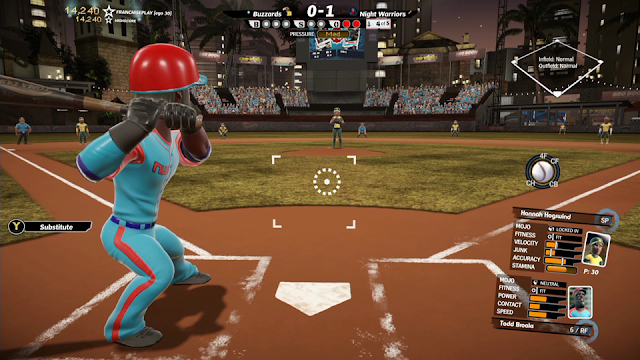 You won’t find any real-life baseball players or teams in this game, as the game is entirely fictional. However, with the time and effort, one can edit the teams or create new ones in the game to more closely represent their favourite team. I found the team creation tool to be very detailed, there is a nice selection of animals and logos to choose from, a wide variety of fonts for the team name and an RGB slider so you can just about pick any colour for every element. I wanted my team to be the Roosters, and while the closest animal I could find was an Eagle, I was able to use a different logo behind the Eagle to represent the comb on my Rooster and it looked fabulous. You can then choose which logo is represented on both home and away uniforms and pick the colours for those separate uniforms as well.

The player creation tool however is a little to be desired. In terms of naming them and giving them a background, all is fine, however there are not many options when it comes to what the players look like. There were about seven different hairstyles for the women, none of them twintails (sorry Matt and the Miku fans out there), and I found myself choosing the same hairstyle for a lot of people as the ones available didn’t look all that great to be honest.

Aside from those shortcomings, Super Mega Baseball is a colourful, vibrant game that has clearly had a lot of love from the developers. The stadiums all have their own personality and represent a completely different ambience to each other. The backdrops to each stadium have had a lot of work done on them despite only really being seen during a homerun, and it’s the fact that the developers could have done a boring generic vista for every stadium as it is hardly ever the focus of the game. The fact that they gave them some love deserves kudos. 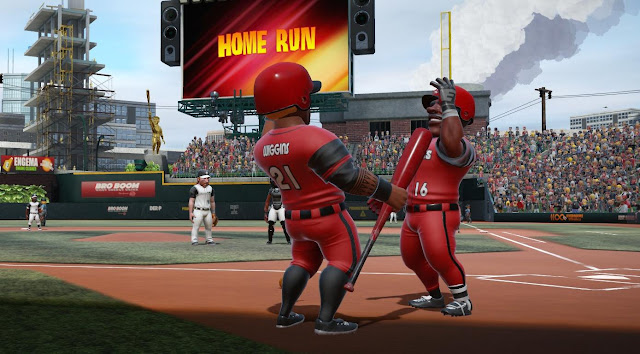 A problem I’ve had in modern baseball games has been rectified by Super Mega Baseball 2. In most games, I tend to have a huge problem with depth perception, I remember being frustrated in my review of MLB The Show 15 on the PlayStation Vita. There was no way I could hit the ball successfully and I was often met with a strike-out. Super Mega Baseball 2 has a way of telling you that you might be swinging too early or late. Most games do this, but Super Mega Baseball will actually stop play for you and explain exactly why you might be getting it wrong. Once I realised why I was swinging too early, it made sense, and now I can enjoy the game a lot more.

These tips come across for everything, if you’re constantly throwing straight balls, the game will stop and say “hey, this is how you do a curveball, give it a try!”. The game offers tips on different aspects of fielding, pitching and batting, it’s a sports game that actually wants you to get better, rather than constantly crushed on easy mode. It’s fantastic.

By learning the game through these on-screen tips, I have been able to take control of many closer games. When pitching, the right stick is used to select the type of pitch, while the left stick aims where the pitch is going to go. You then choose to pitch the ball normally or with power by using the cross and square buttons respectively. After the button is pressed, you then need to steer an on-screen indicator over where you aimed the ball within a set amount of time, the closer you are, the more accurate your throw. I was able to throw strike-outs pretty handily by my second game. 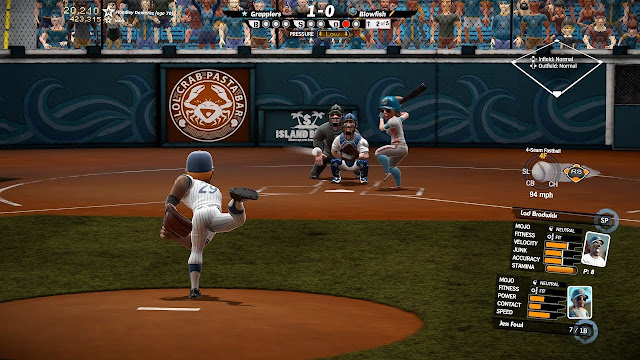 Batting is equally as easy to pick up as pitching. You need to think about where the pitcher might pitch the ball, then it’s a case of moving an on-screen indicator where you are going to swing. You can then choose to hit it normally, bunt it, or charge up a power shot. It’s not quite rock, paper, scissors, but homeruns only come if you can charge up a power shot at the exact moment you connect with the ball, and only if you were able to hit just under the ball to make it fly skyward, so guessing where the ball will go is key. Running the bases is done by either using the face buttons to select a runner to go or holding down L1 or R1 to run forwards or backwards.

Fielding is also relatively easy, it’s done almost automatically for you, but choosing where to throw the ball to is mapped to the face buttons, with each base representing the same button on the controller. Hold the button down and the higher the power meter, the faster the throw.

Super Mega Baseball 2 is an accessible, arcade-style game anyone can enjoy. I hadn’t enjoyed a baseball game myself in a long time, and I tied it to simply not being able to hit the ball while batting. Super Mega Baseball 2 pretty much fixes everything I didn’t like about modern baseball games. I believe even die-hard fans of baseball will still find much to love in this game, as it’s clear that the developer loves baseball as much as any fan.