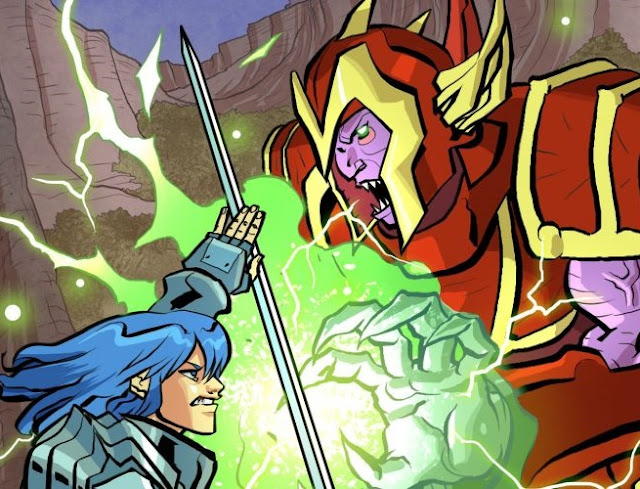 Stripped of your wife, your son and your life, the seven gods that once sealed away a terrible evil decide to bring you back to help them fight it when it returns. With your son as the key part of a ritual to bring back this evil, you set out on a journey with the gods’ aid in order to find an armour left by one of your forebears that may just put an end to this madness.

Cast of the Seven Godsends is a love letter to the likes of both Capcom’s Ghost ‘N Goblins, as well as its spiritual sequel, Maximo. In both cases what was most important to them was stolen and they set out against incredible odds to get them back. Often in nothing more than their underpants Taking a bit of a different turn, Kandar may not run around in his boxers or briefs chasing after a princess, but instead is driven by something much more important, the love of a parent for their child.

Visually Cast of the Seven Godsends is wonderful to look at with smooth animations and wonderful backdrops, and is clearly a love letter to the games that inspired it. This is good because were it not so pleasant to look at, the gameplay may not have been tolerable, what when everything flying across the screen is out to kill you, and they are really bloody difficult to avoid. Designed as a 2D platformer, you’ll be guiding Kandar high and low through a variety of different locations all rife with the most incredibly dangers. 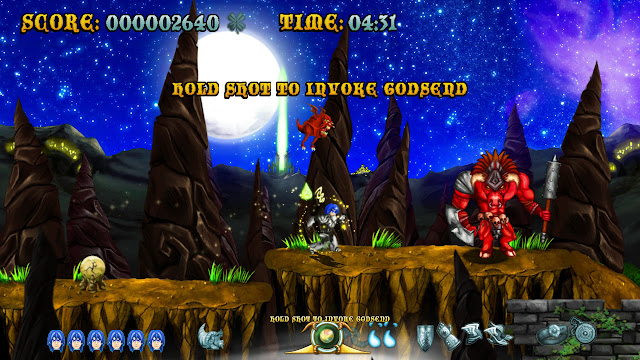 I have to emphasise this: Seven Godsends is not easy, and you’re even going to have to deal with lives, credits, and the very real possibility of a “game over” screen, meaning that you’ll be seeing the starting stages often as you restart the game over and over again. While eventually you’ll be dipping and jumping under and over obstacles, each death is something to learn from. Enemy patterns, environmental effects like fields catching on fire because you’ve stepped on to the trigger and boss’ attack patterns are all things that will kill you, and frequently, but eventually you’ll learn how to get out of the way. Everything that happens is to be learned from even if you think that there’s no way that something should have killed you. Again.

As a normal standard Kandar may only be hit twice before dying. Die too many times, and you’ll be asked to “insert a credit” in order to continue. Run out of credits, that’s it folks. Either hike it back to the first stage or call it quits for the night. This is different from the norm with other “hard” games that we see today. Take Nioh or Dark Souls as an example. Your character will die a lot, but each time you’re given the opportunity to recover all the experience that they’ve just lost by getting to the same point where they’ve just died. Do that, and nothing but time has been lost. This gives those games a far slower, more deliberate pacing (and difficulty). With Cast of the Seven Godsends, if you don’t learn quickly, you’ll never get to the end.

Because the only way to learn is to take the hits, and because lives and continues are limited, Cast of the Seven Godsends can be frustrating. But there is one or two modernisations, which helps make the game slightly more palatable than those really old-school games. There are upgrade points, for a start. Just about anything is better than the knife that you are given to throw at your enemies at the start, for example, and, additionally, you can pick up armour in order to take a few more hits. 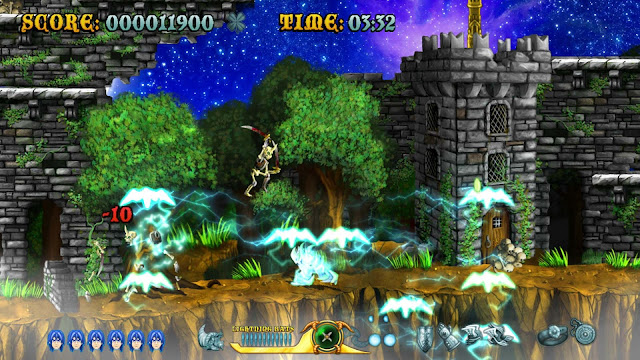 The armour itself comes in two styles. The first is pretty standard and makes you look like a walking shiny tank. The second of the two is much more fun as the given armour embodies the properties of one of the gods that granted it to you. So now not only will you be well defended but you’ll also be granted new abilities. Adding in just that one extra level of detail, the god-granted armours will also modify how your current weapon acts such as changing a lazy projectile into a windstorm that follows the ground until it is outside of your field of vision. So, yes, Cast of the Seven Godsends is old-school hard, but the modern touches help ease the pain a little.

All together these elements make for an interesting, albeit incredibly hard, journey. It’s a game made for people who are willing to play and replay the same levels over and over again because they simply won’t let it beat them, and while that might be a niche audience today, it’s hard to argue that Cast of the Seven Godsends doesn’t do it in style.