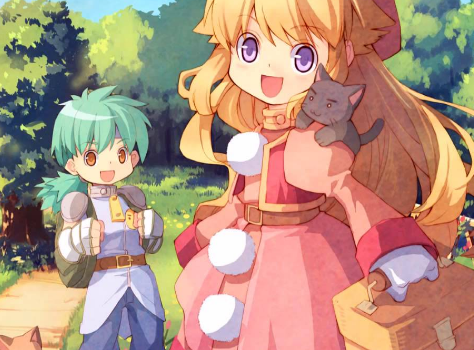 I recently had the pleasure of sitting down to Zwei: The Ivalard Insurrection (also known as Zwei II in Japan). In a pleasant turn of events, my hope to one day experience its predecessor came to pass as Falcom’s first title has now also been localised for the first time.

Related reading: Pierre-Yves’ review of the Zwei 2, which was localised last year.

Now it’s not unusual after playing the successor to something to prefer it over the original. It could be a number of factors, from performance to visuals or simply that the sequel has the better written adventure. Generally the passage of time means that a developer is able to refine their craft. For all intents and purposes this holds true here too; Zwei II is an improvement over Zwei. Though with that being said I found myself more than charmed by the original too, thanks to its top down classic Falcom design.

Zwei! follows a pair of step-siblings that will be instantly familiar to anyone who players the sequel. These two are living the dull lives of two 14 year-olds on a floating island in which nothing really seems to happen. But then their local shrine was robbed, and so the two pack and head off on an adventure. Armed with zero experience and nothing more than bravado, they set out to catch the thief, and events steamroll from there. 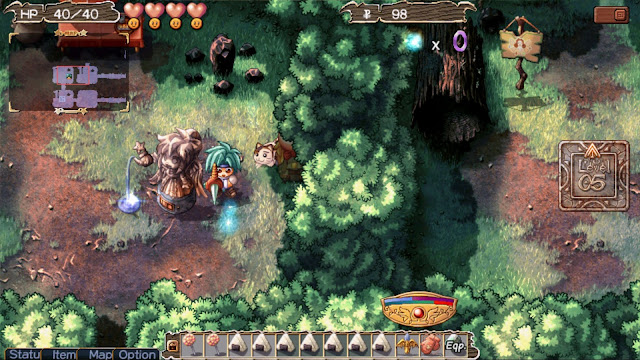 It is clear to see how much fun the developers had while designing their unique title. While being very serious on the dungeon crawling, action, the overall narrative is lighthearted and hilarious with jokes and puns being thrown left and right almost every time you characters get into a conversation. Sometimes the puns will induce a groan or two, but even then, the sense of frivolity and humour behind the delivery makes the world feel more alive and entertaining as the hours and the dungeons move on by.

The only real difference between Zwei! and Zwei II is that Zwei II offers players a 3D engine. In just about every other sense they support the same gameplay and mechanics. Dungeons are broken up nicely with plenty of time for that aforementioned humour, making for a much more enjoyable time in them, as you are not always seeing the same hallways or deep caverns. Adding to this is that the more “retro” older top down style which is classically familiar to older Falcom fans, and remains adorable to this day.

The unique hooks for the Zwei game is that they give players access to both characters simultaneously for dungeon crawling. Unlike its sequel however, and in a move that I much preferred, there was no dedicated button to instantly switch from attacking with one character into the next. Instead of this, there’s an actual swap option to change between characters, and, critically, instead of simply standing idly by, the other character that you’re not using will also fight and attack on their own. 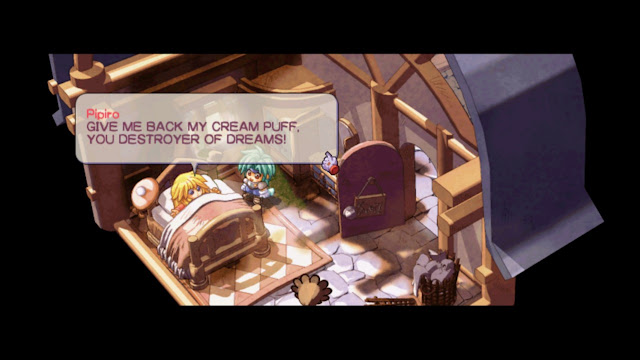 Having more than one character attacking enemies helps as Zwei! in a lot of ways is harder in its top-down style than Zwei II with its more open environment. Leveling up feeds into the unique style as dispatching enemies does not grant experience as it normally would. Instead of this experience is obtained through eating a variety of foods, which also happen to be your healing items. You can eat items as soon as you pick them up for their experience values but then you won’t have healing items when the time comes.

Zwei! The Arges Adventure is a lovely little title from Falcom that I am very happy was localised after the success of its successor. If you’ve been been needing some lighthearted dungeon crawling or have already played the localised sequel and want to know how the series began, than you’ll appreciate this one a great deal.