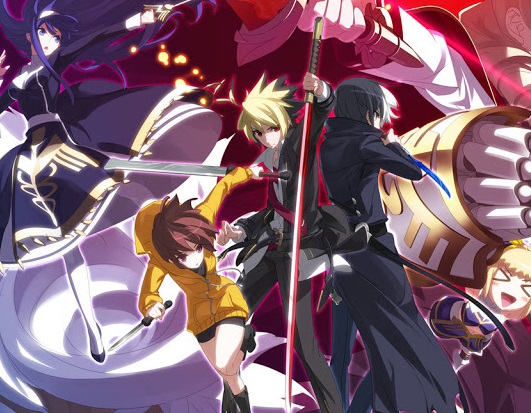 Japan, we need to talk about the way you go about naming your games. As a general rule, I’ll take creative Japanese titles over generic Western ones (does anyone really prefer The Evil Within to Psycho Break?), but there’s a limit. When I have to look up a game on Wikipedia just to find out how to pronounce its name—not because of foreign words I’m not familiar with, but because of a seemingly random assortment of symbols and letters—we’re well past that limit.

Naming conventions aside, Under Night In-Birth Exe:Late[st] is a very good game. It’s an indie fighting game from French Bread, the people behind Melty Blood and Dengeki Bunko: Fighting Climax. With that in mind, you can expect a fast-paced, systems-heavy fighter with fantastic character designs and gorgeous sprite artwork, and that’s exactly what Under Night In-Birth delivers. 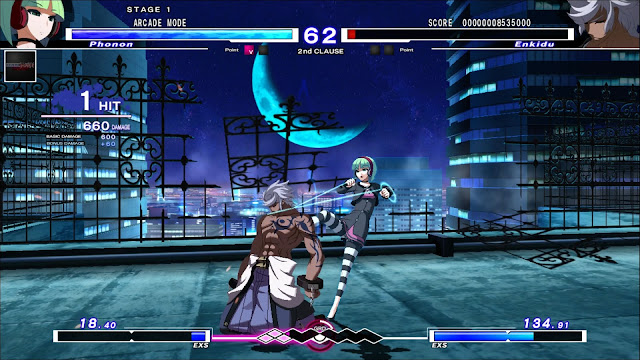 At first glance, it can seem like an incredibly complex game, with multiple resource meters to manage and a wide range of universal attacks and defensive tools—before you even get into each character’s unique move list. This isn’t helped by the tutorial, which is incredibly in-depth but confusing in the way it’s laid out and written. As a result, Under Night In-Birth looks incredibly complex and daunting when you first try it out.

In practice, it doesn’t take long to wrap your head around, and the medley of different mechanics all come together well. At the beginner stages, you can get by without making use of a lot of those tools, too, and then slowly incorporate extra things as you get more comfortable.

Under Night’s biggest point of difference from other anime-style fighters is its Vorpal system. In the middle of the bottom edge of the screen is a segmented gauge called the Grind Grid (or GRD). Actions like damaging your opponent or Shielding attacks fill the gauge from your side, with the potential to overflow into the opponent’s half if you manage to gain that much, while getting hit or having your attacks Shielded results in you losing GRD. Meanwhile, a second, circular gauge at the centre of the Grind Grid, called GRD Transfer State, gradually fills with the passage of time. When that bar is full, whichever player has the most GRD enters a powered up state called Vorpal, giving them the upper hand—at least for the next few seconds. 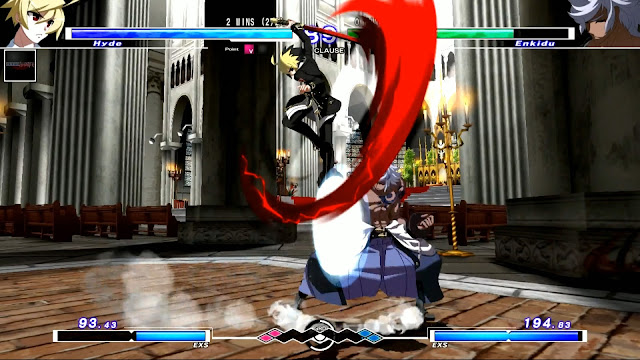 While in Vorpal mode, you get a small damage boost, and access to your character’s ultimate move. You can also do a Cross Cast Veil Off, which works like Roman Cancels in Guilty Gear, cancelling whatever you’re doing and returning you immediately to a neutral state—allowing you to extend a combo or make an unsafe move safe. Using Cross Cast ends your Vorpal state immediately, but that’s a small price to pay for such a powerful technique.

This creates an interesting dynamic in battle, where you’ll be fighting normally for the most part, but whenever the GRD Transfer State gets close to being full, raising your GRD and/or lowering your opponent’s becomes the priority. If you’re behind on GRD, otherwise risky manoeuvres suddenly become much more worthwhile; if you’re ahead, a usually low-risk approach can suddenly be much more dangerous if it could give the other player a chance to take the lead.

Aside from that, Under Night works more or less like other anime fighters, with a focus on mobility, space control, traps, and juicy combos. A universal overhead attack means every character has at least some potential for high-low mixups, and each character also has forward leap of sorts (think King of Fighters’ super hops) for quickly closing distance. 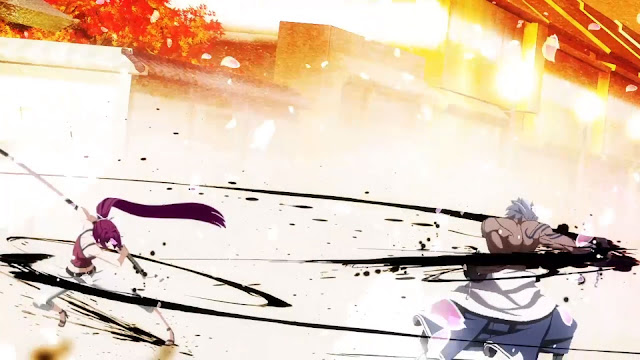 The story that frames all this is a bizarre dark fantasy that can be hard to follow, but I’ll do my best to sum up: each full moon is accompanied by a phenomenon known as Hollow Night, wherein monsters called Voids appear and try to feed off people’s life energy. Certain people are able to channel the Hollow Night’s power; they’re known as In-Births, and they each have their own motivations for fighting. Meanwhile, a shadowy organisation called Amnesia is up to some sort of mischief, which everyone else gets roped into in some way or another.

In other words, a bunch of magically-charged people are fighting one another under an ominous moon.

Like many a fighting game, Under Night’s narrative is delivered primarily through individual character stories that are all intertwined, and these characters are where Under Night is at its best. There are a lot of anime archetypes, but there’s enough creativity and depth to each of them that they all feel unique and interesting. 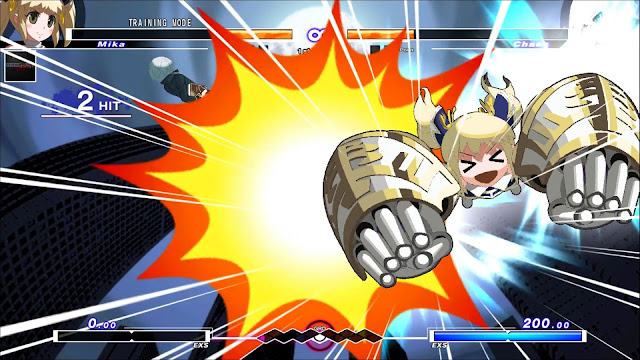 Naturally, I there were some characters and storylines I didn’t like as much as others. The “main” character, Hyde, is a something of a brooding anti-hero, and while that’s understandable given the context—he got turned into an In-Birth and pulled into this strange world simply because he was in the wrong place at the wrong time—that’s not an arc that I ever find especially captivating. Nanase, a happy-go-lucky schoolgirl turned In-Birth, is a charming character, but her story is rather uncomfortable: she’s hunting down Hyde under claims that he “defiled her body”. It’s not what it seems, but the implications of that phrasing are deliberate, and serve as the butt of a joke that comes across as really careless and insensitive.

On the other hand, there are a lot more characters I like than those I don’t. Yuzuhira is easily my favourite—she’s the descendant of a famous samurai family, though she’s more interested in taking it easy, eating, and snapping selfies. In other words, I love her. You’ve also got a no-nonsense knight from an ancient order dedicated to fighting the Void, the arrogant, witch-like leader of Amnesia, an absent-minded old man who seems to fight purely for the joy of it, and a human-turned-void who still retains some fragments of his humanity, to name but a few.

The roster is as varied in fighting style as they are narratively; even at 20 different fighters now, no two are alike. Again, Yuzuhira quickly found her way into my heart with her iaijutsu gimmicks, mid-range footsie focus, and the way she slaps people around with her jacket, but then you’ve got the likes of Hilda, who’s reminiscent of Blazblue’s V-13 in her keepaway game. Hyde’s an all-rounder and a great pick for beginners, Akatsuki’s an aggressive boxer who can do neat combos with relative ease, Waldstein’s a big old grappler with a lot of different ways to set up his throws, and so on. It’s a rare treat to play a fighting game with a cast as well-rounded and interesting is this; I actually had trouble picking my “main” because there were too many candidates right off the bat. 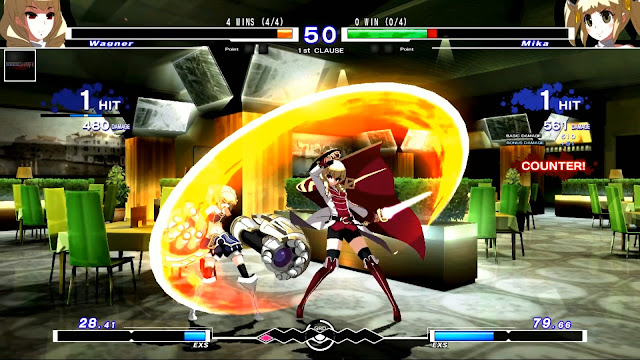 For those who’ve played Under Night In-Birth Exe:Late, [st] has a few new additions. There are four new characters: a burly brawler called Enkidu; Mika, a small girl with gauntlets almost as big as she is; a sword-and-shield wielding knight called Wagner; and Phonon, who carries a whip and all the dominatrix swagger that comes with that. There’s also a new Chronicles game mode, which serves as a visual-novel style prologue to the main game, some balance changes, a few new stages to fight on, and a combo challenge mode. The latter is particularly neat, because rather than just a test of execution on strings that are flashy but not very useful, it actually teaches you practical combos for different match situations. And, of course, Under Night In-Birth Exe:Late[st] marks the series debut on PlayStation 4.

Aside from that, you’ve got all the usual fighting game modes: arcade, training, ranked an casual online play, survival, and so on. In my experience, the online infrastructure isn’t fantastic—it was noticeably laggy even playing between Australia and New Zealand, resulting in slowdown and input delays. Your mileage will obviously vary depending on your situation, but this might be a game best reserved for offline multiplayer.

Even so, Under Night In-Birth Exe:Late[st] (here’s hoping this is the last time I need to type that) is fantastic. The Vorpal system is a clever twist on the format, adding a neat extra layer of strategy to the game, but it’s the cast that really makes Under Night In-Birth stand out. There’s so much love and creativity gone into the roster, and that, more than anything else, will make or break a fighting game.