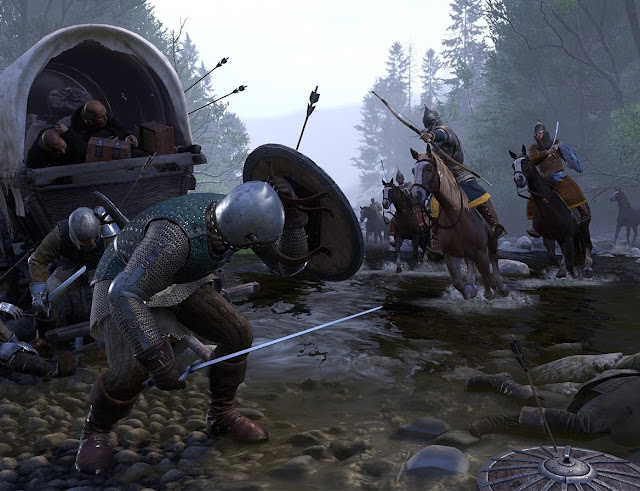 Deep Silver and developer, Warhorse, has today released a rather in-depth gameplay video showing off Kingdom Come Deliverance, a game that I was vaguely following along with before, but now am completely sold on.

This is an open-world RPG set during the time of the Holy Roman Empire. You’re given the task of avenging your parent’s death at a time where banditry and violence was rife, and will find yourself rising up to the point where you’ll be making incredibly influential decisions that affect the entire continent. If that all sounds very Elder Scrolls, it probably should since the game wears its open world, massive scale inspiration on its sleeve, but that’s also not a bad thing by any means.

Here’s a summary of what to expect from the game, from the press release:


Massive realistic open world: Majestic castles, vast fields, all rendered in stunning high-end graphics
Non-linear story: Solve quests in multiple ways, then face the consequences of your decisions
Challenging combat: Distance, stealth, or melee. Choose your weapons and execute dozens of unique combos in battles that are as thrilling as they are merciless
Character development: Choose your equipment, improve your skills, and earn new perks
Dynamic world: Your actions influence the reactions of the people around you. Fight, steal, seduce, threaten, persuade, or bribe. It’s all up to you
Historical accuracy: Meet real historical characters and experience the genuine look and feel of medieval Bohemia

Of course, doing massive open world games is incredibly difficult and it doesn’t take much to take a really neat idea and then plunge it into the realms of “for the most niche, hardcore fans only.”  See also: Elex.

But judging from the extended gameplay, I have every reason to believe that this game will be a highlight of the year. We don’t have long to wait for it, either – it launches on February 13.