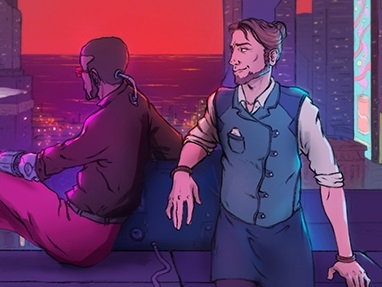 With developer name like DeconstrucTeam and a publisher name like Devolver Digital, it’s natural to expect big things. The Red Strings Club is a new cyberpunk game for Steam which takes elements from adventure games and visual novels, boasting a wickedly complex conversation system and a cast of enchanting characters.

You play as Donovan, an ordinary bartender in a city overrun by technological augmentations, androids, eco-terrorists and even weirder folks, dispensing drinks in return for information. Backed by a moody pixel-art aesthetic and a soundtrack channelling the middle ground between acid jazz and Vangelis, The Red Strings Club is a thoughtful game which might take an afternoon play but will take a month to unpack thematically.

The game’s writing and characters is definitely the game’s strong suit. DeconstrucTeam has limited itself to a very reasonable cast of characters who the player gets to know well, and whose interrelationships are well defined and interesting. It’s a project which feels wholly planned, with branching paths leading to conclusions which feel not only logical, but deserved. Donovan the bartender is joined by the carefree hacker Brandeis and the rogue empathic android AKARA-184 and the trio join forces to ride the line between corporate technocracy and destructive anarchy. This is a visual novel with choices that are far reaching and challenge the player to grapple with the nature of humanity, backed up with gameplay carefully tuned to get the developers’ point across.


As players will soon see, very few activities in the game are automated or abstracted – DeconstrucTeam has the players experience them firsthand. The game equates awkwardly tipping over a bottle to pour alcohol into a glass, or carefully carving out intricate patterns into an augmentation node, with the complex and intrinsically human art of conversation. Sure, automating the bartending and claywork segments into a series of menus will be more user friendly, but will that make the player feel as human as if their clumsy flesh-hands were trying to meet the strict requirements of their character’s craft? It’s a mechanic which is subtle in its brilliance, and it’s a great refutation of people who would lambast The Red Strings Club for having less “gameplay” than something like Watch Dogs. A robot could play and appreciate Watch Dogs. Only a human could appreciate The Red Strings Club.

The more you play, the more the game’s vision is realised. Every single interaction, question, fact and comment has something to do with this overarching concept of humanity, and where we as humans draw the line between human and inhuman. There are no easy answers either, and the non-player characters tend to argue with you regardless of which side you take. Favour augmentations too much and you’ll get a lashing from PROXYMA, while ignoring the positive aspects of transhumanist technology will have you roasted by the employees of Supermassive Ltd. No matter what your choice is, you have to own it, and even if it’s one made on a base impulse in response to a slyly provocative stimulus, that response is yours. It’s you.

A single playthrough is around three hours but you’ll want to play it multiple times. It’s a game with some cleverly foreshadowed plot twists, but I find the experience actually gets better once you know what will happen. The second I finished, I wanted to start another playthrough right away: the game did a fantastic job of changing based on my choices, and I absolutely needed to see if I should have done things differently. I’m still dying to talk to someone who’s finished, because I am sure their interpretation and ultimate moral decisions will be different than mine. It’s definitely the genius of DeconstrucTeam’s design that its work coaxes out these defined stances on technology from players who previously might not have cared. It also helps that the game features a snazzy UI that tracks every impactful choice you made, so that you really feel that your decisions are yours. 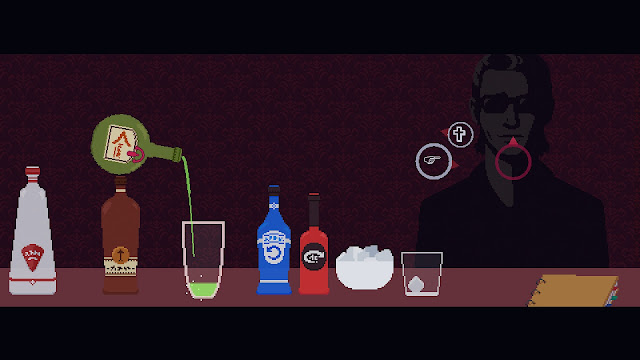 I have only one small complaint, and it’s that I felt that the bartending segments could have been explored further. Just as they start to become complex enough to be a puzzle rather than a list of instructions, they’re suddenly taken away as the plot demands. There are definitely puzzles scattered everywhere in the game’s design, but I wish it spent more time developing Donovan’s bartending skill: VA11-HALL-A this is not.

Ultimately, The Red Strings Club tries and succeeds to be deeply thought provoking. Whereas other sci-fi games can tell a great story and make the player fear for a hypothetical future, few have made me question my personal definitions on fate, ethics and humanity. Maybe it’s because The Red Strings Club isn’t weighed down by all the empowerment that traditional action sci-fi games wear on their sleeve. Maybe it’s because the writing is simply out of this world. Either way, I can imagine this game is something which sci-fi and narrative game fans alike have been waiting eons to see – so try it out for yourself and just try to come out unchanged.

Games that inspire us to learn, Space Invaders, and other great stuff! (Digitally Uploaded 2018, Episode #2)