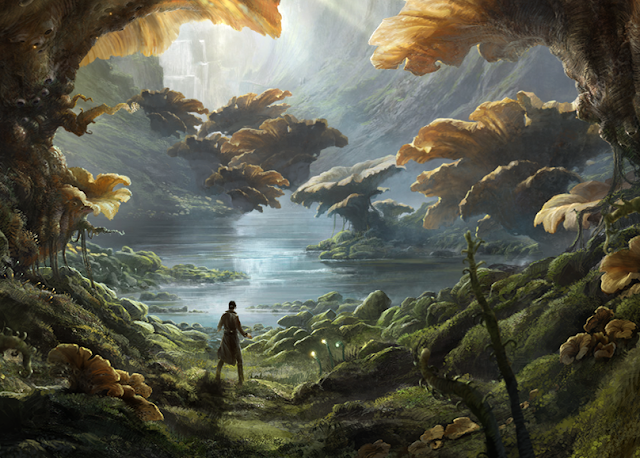 One of the most difficult genres to look at critically are those casual match-3 type games. There are just so many of them, and they rarely deviate from one another in any meaningful manner, that it becomes difficult to look at any individual match-3 release on its merits, rather than in comparison to the thousands of games like it that I’ve played as a critic. But readers may well not have played hundreds of samey match-3 titles in the past, so these might well be relatively fresh for them.

So I’ll try to look at Azkend 2: The World Beneath through the lens of someone who hasn’t played the dozens of games like it previously. On that basis. it’s actually a decent enough little game.

Azkend 2 can be played in two ways. Firstly, there’s the main adventure mode, where, in between solving match-3 boards, you’ll also be following along with a story, and occasionally tasked with solving light puzzles or playing hidden object mini-games. That narrative is bland and generic, but passable. Clearly inspired by Jules Verne, it works hard to create that same sense of wonder and discovery from its very opening moments, when the protagonist is on a sailing ship and sucked into a giant maelstrom, and finds themselves in a world full of wonder and majesty, as they journey to the center of the earth. 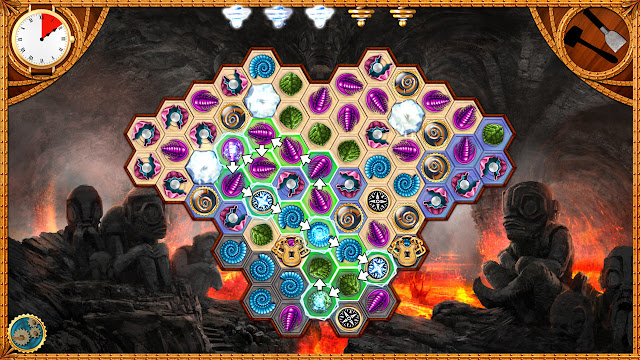 The developer recruited a decent enough voice actor to do the narration, and filled the cut scenes with some beautiful art that really helps set the scene. In terms of presentation, everything is spot on, and the Switch’s relatively big screen makes it the ideal (portable) way to play the game. It’s all very superficial, though. Regardless of how well you play in the game, the narrative’s going to play out in the exact same way. There’s no way to avoid being sucked into the maelstrom, for example, even if you complete every game board leading up to that event in two seconds flat. So there’s a disconnect between the storytelling, and the gameplay, which makes Azkend a very superficial experience in the end, and one that’s hard to get really drawn into.

It doesn’t help that it’s paced poorly too. Between each major new scene you’ll be playing a series of different game boards, and following each of those you’ll make only the tiniest bit of progress. The first major scene of the game – the maelstrom – pauses so you can complete four different boards to build a compass or something… which again doesn’t actually matter because you’re going to get sucked into the storm anyway. At first all of this is tolerable, but Azkend 2’s narrative is surprisingly lengthy, and those pacing and agency issues become tiring well before the end.

The other way to play is a challenge mode, which is very standard match-3 score attack mode, and quite compelling, by virtue of the genre always being compelling. Azkend 2 has all the usual tricks of the trade, with things like ice blocks that need to be melted by matching icons next to them, before you can use the icon in the ice block for further matches, and various powerups which can benefit you by clearing away tiles. And if you can match six or more tiles in one turn, you’ll create a lighting effect which will remove yet more tiles for you. 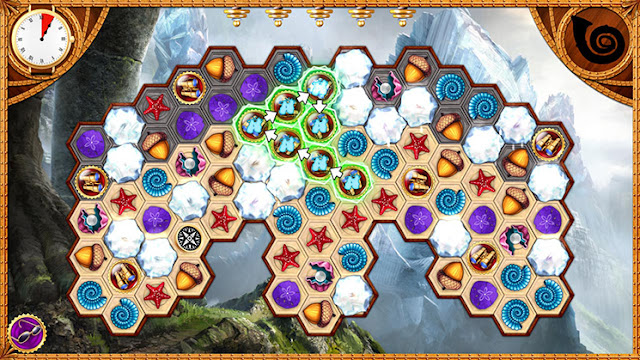 Finally there’s the big powerup, which happens after you successfully match a couple of different tiles in a row. This Tesla coil thing can remove large parts of the board in one go, and for the more challenging boards, getting that to activate is critical.

Anyone who has played a match-3 game before will feel comfortable playing Azkend 2 far more quickly than they will reading through my description of the game. It is, after all, built to be as accessible as possible to as many people as possible, and something that’s very easy to unwind with after a stressful day at work where you don’t want to think about doing anything else. It’s actually a good thing to have on the Switch for that purpose – I’ve already found myself gravitating towards it after a late night train ride home from work or two.

But while Azkend 2 offers a perfectly workable match-3 experience, it’s not perfect. I found that, at times, the icons that I was matching up were a little too detailed for their own good. They’re attractive – again, everything about this game is attractive – but on the Switch’s relatively small screen, the level of detail on icons could make the play field look busy and cluttered, and it became difficult to actually distinguish some icons from one another when that happened. Also, the less said about the mini-games in the story mode, the better. While they achieve their goal of breaking up the match-3 action, they so bland and uninteresting they became something I actually dreaded coming up to. The match-3 gameplay is Azkend 2’s strength, and the developer should have focused purely on this. 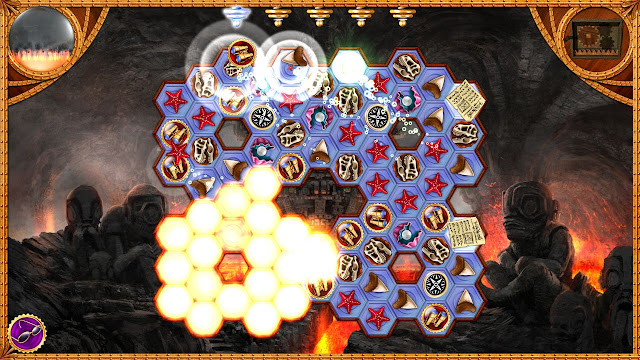 But yes, all together, Azkend 2 is a perfectly workable and enjoyable match-3 game. If you’ve played quite a few of these in the past then you’re probably going to question whether you need even more of them, but then again, this is the first match-3 game of its kind on the Switch to date, so perhaps there’s an audience for it. It’s not going to be your game of the year, but you might just get a lot of play out of it.

Space Invaders Extreme is a masterpiece, and it’s coming to PC