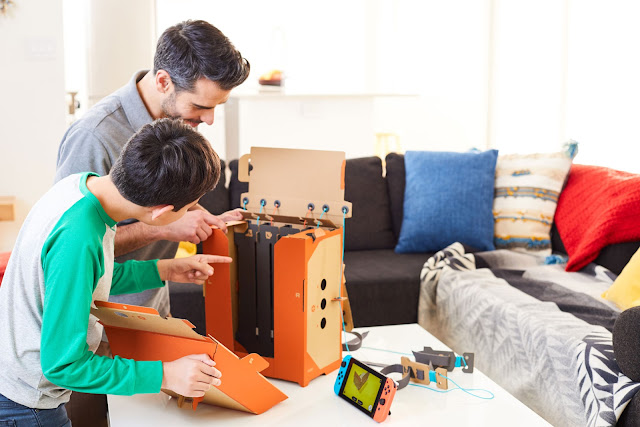 When Nintendo started teasing an announcement for “a new way to play” last night, it lead to a lot of speculation—could it be a TV-only version of the Switch, or a handheld-only version, or some sort of new amiibo thing? I don’t think anyone quite expected what the company unveiled this morning: Nintendo Labo, a build-and-play thing that lets you construct various peripherals out of cardboard and then use them to play a variety of games on the Switch.


The way it works is fairly simple. Each set comes with a bunch of cardboard pieces in various shapes and sizes, which you fold and slot together as you would any other cardboard model. However, these models have spaces to insert the Switch and/or Joycons, turning each model into its own game.

One model lets you build the handlebars of a motorbike and play a racing game. Another has you put together a fishing rod—complete with working line and reel—and unleash your inner angler. There’s a working 13-key cardboard piano and a radio-controlled car, the inner workings of which I can’t wait to explore. Perhaps most impressive of all is the Robot Kit, with which you can turn yourself into a robot in order to stomp and punch your way through a colourful action-adventure game.

Nintendo Labo is Nintendo giving kids fun stuff to play with that’s also good for developing their creativity and cognition. It’s Nintendo being innovative and socially responsible. It’s LEGO-esque. It’s something we should all celebrate as Nintendo at its best.

Naturally, this announcement has been followed by an endless stream of jokes, from both Nintendo Labo’s fans and its detractors. Funny though some of those are, they overlook the power and value of this kind of toy. Essentially, what you’ve got here is something that combines the cognitive development and creativity of something like LEGO with the physicality of motion controls and the mental stimulation of video games. Most importantly, all these different elements are brought together in a seamless and fun way.

So, while adults and “gamers” might scoff, or wonder why it isn’t a new Metroid or whatever, this is an innovation that has the power to change the way kids interact with their games. Like the best toys, it offers a way for kids to learn and develop in a way that’s fun and engaging. That’s huge. As much as I’m looking forward to playing with Nintendo Labs myself (I love this sort of stuff), I’m even more excited at the prospect of playing it with my nieces.

Nintendo Labs is launching on April 20 in North America and Australia/New Zealand, and April 27 in Europe, with two sets available: the aforementioned Robot Kit (AUD $119.95), and the Variety Pack (AUD $99.95), which includes the motorbike, fishing rod, piano, RC car, and a house. There’s also a customisation pack in the way, which comes with a bunch of stickers and whatnot to decorate your creations with.

I can only assume that this is just the start; Nintendo will have many more Nintendo Labs toys in the pipeline. I wouldn’t be surprised if third parties got involved, too—imagine the LEGO games that we could see off the back of this. This is exactly the kind of creativity and innovation I’ve come to expect from Nintendo.