In the past week or so, I’ve had a very difficult time putting down Sky Force Reloaded. I’ve stayed up far later than I should almost every night, trapped in a “just one more go!” loop. I’ve excitedly bought other games, only to watch them collect dust because every time I fire up the PS4 I find myself playing Sky Force instead. It’s that kind of game.

Conceptually, Sky Force Reloaded is a simple, familiar, classically-styled shoot ’em up, akin to 1942 or Raiden. At the cockpit of your plane, you fly through each level, shooting down wave after wave of enemies, dodging their bullets as necessary, before taking out a big end-of-level boss.

That’s a timeless design, but what makes this take on it so compelling for me is the upgrade system. Again, it’s simple and familiar: destroyed enemies drop stars, which you can spend on between levels to upgrade your vehicle’s various components. Upgrading your main cannon increases damage, fire rate, and spread; improving the plane’s body gives you more health; adding and strengthening a magnet lets you collect stars and power ups from further away. There are secondary weapons to add, like homing missiles, and limited-use power ups in the form of a laser beam, shield, and mega bomb.


Such a system isn’t uncommon, but Sky Force Reloaded gets the balance just right, so that almost every run will net you enough stars to buy at least one upgrade, and the effect of each upgrade is small but noticeable. Low health and a pathetic pea-shooter of a cannon mean you’ll die a lot when you start out, but with each death you get stronger, so you can get further next time, collect more stars, and further improve your jet.

It helps that each level of short, a couple of minutes at most, and loading times are almost non-existent. That makes it even harder to resist the call of “just one more”—one more attempt to beat a level, one more star collecting run, one more ship upgrade.

It also helps that the level design. This isn’t a bullet hell; enemies are trigger happy and pull out some interesting shot patterns, but they don’t usually flood the screen and force you to navigate a maze of gunfire. Instead, it’s about quick reactions, prioritising targets, and killing enemies as quickly as possible. 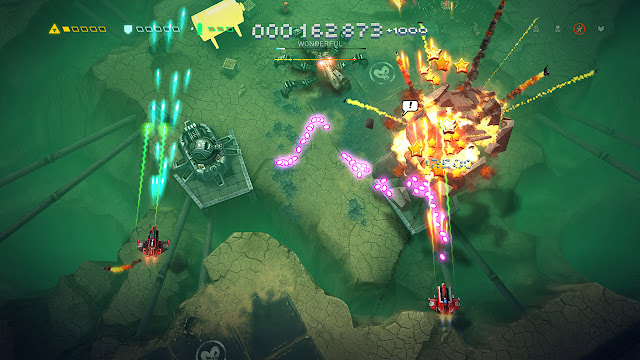 Waves of gunless drones are easy enough to take down in their own, but when they’re coming from all sides of the screen, you have to be smart about your kill order lest you let one escape (and break your scoring chain as a result). When they’re getting cover fire from turrets and helicopters—limiting the amount of safe space you have within which to maneuver—you have to decide whether to prioritise destroying the turrets at risk of letting a quick enemy escape, or focus on the small fries at risk of catching a bullet.

This is par for the course in shoot ’em ups, but the level and enemy design in Sky Force Reloaded is up there with the best of them, making such decisions constant and endlessly satisfying. And, once again, the progression system factors in; a lot of those decisions hinge on how quickly you can destroy a chosen target or what special weapons you have available, which is a direct result of how you’ve chosen to upgrade your ship.

Naturally, as you replay levels for stars and upgrades, there’s also the less tangible progress that comes from mastering the game. A lot of shoot ’em ups rely on learning by rote—as you get to learn where and when different enemies spawn, you can take them out quicker with less reliance on reactions. Sky Force Reloaded is no different, but it’s somewhat masked by the more quantifiable progression system—you’re playing and replaying for stars to make your ship stronger, but as a side effect of that you get better at the game itself and each level through repetition. 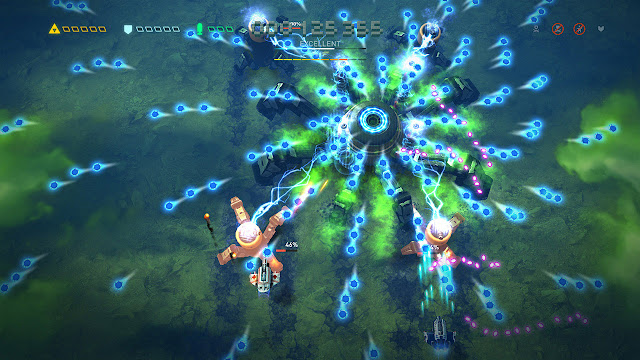 This all brings is back to that enchanting loop at the centre of the game: play a level, probably die, spend stars on upgrades, then try again with a better ship, better knowledge of the level in question, and the promise of more stars and more upgrades as a result. It’s also for this reason that I never felt like the game was wasting my time, despite each level taking numerous attempts to clear. Each attempt, even one that ostensibly ends in “failure”, instead feels like an incremental success. It’s simple and effective, as my many later-than-sensible nights with the game prove.

There are a few other systems at play around the fringes of that central shoot ’em up premise. Each level has four optional medals that you earn by completing specific objectives, like not getting hit or destroying every enemy. Earning all four of a level’s medals unlocks a higher difficulty, where the enemies are sturdier, stronger, and more plentiful, and where stars drop in much greater number. It’s often far more lucrative to replay earlier stages on higher difficulties, giving you plenty of reason to go back.

There are a few different ships to unlock, each with different stats, by collecting parts that drop randomly from crates scattered about the game. These same crates also drop cards that grant bonuses, of both time-limited and permanent varieties, and you can spend stars to increase your chances of finding such cards—thankfully, there aren’t any microtransactions, and cards seem to drop fairly often even without spending any stars. 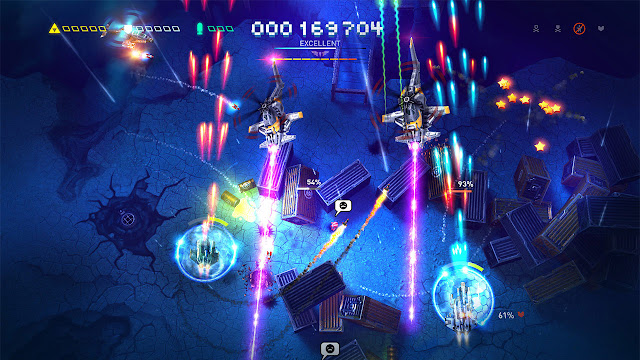 You’ve got a variety of in-game achievements for things like destroying a certain number of enemies or using special weapons a set number of times. Completing these nets you Prestige Points that unlock technicians, who confer unique bonuses, though you can only bring one along with you at a time.

Finally, there’s a tournament mode that lets you pit yourself against friends in a high score competition on and endless stage that gets increasingly challenging. Sadly, tournaments are only available on weekends, and if you want to play that sort of endless survival mode at any other time, you’re out of like. This growing trend of time-limited game modes and features is a frustrating one, and it’s sad to see it in a game that otherwise does a great job of giving players the tools to play on their own terms.

I’d also love to see Sky Force Reloaded offer up a bit more of a narrative context for the action. As it stands, the story is basically non-existent—the bad guys are the bad guys, so you shoot them. Shoot ’em ups aren’t exactly known for their storytelling, but games like Sine Mora and Ikaruga prove that they can do it well. Even just an opening and ending cutscene to give you some idea of who you’re fighting and why would make a huge difference. 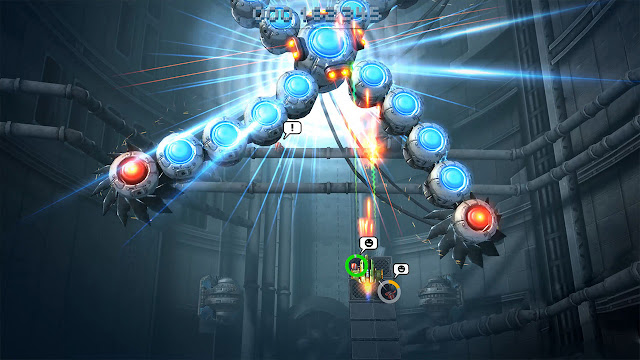 Still, the lack of narrative hasn’t stopped me from pouring hours and hours into Sky Force Reloaded, and I don’t doubt I’ll put in a great many more—I have to perfect every level on Insane difficulty, after all. This is a game that doesn’t do anything new, but it takes a classic genre and delivers on it so well that it’s hard to fault the lack of innovation. If you have even the slightest interest in shoot ’em ups, this is a game you don’t want to miss.