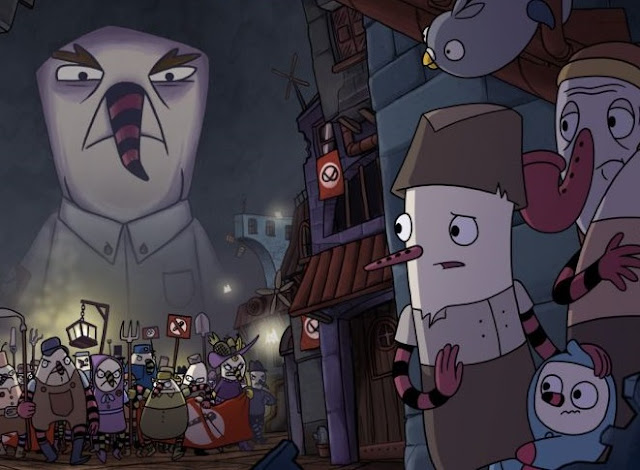 One of the hardest things to do when reviewing games is to review a sequel to a game that you had previously never heard of. Despite this, when given the chance to review The Inner World: The Last Wind Monk, I jumped at the chance, for much of my childhood was spent playing every point and click adventure I could get my hands on, regardless of their background.

I had done some research on the first Inner World game to help prepare myself, which is itself a difficult task, as it’s always much easier to experience the game first-hand than read about it or watch other people play it. Imagine the idea of reviewing Kingdom Hearts 3 when it comes out, and trying the same thing. But, after having done that I was comfortable stepping into The Last Wind Monk, and if you’re in the same boat as I was, I recommend also going about the game this way. 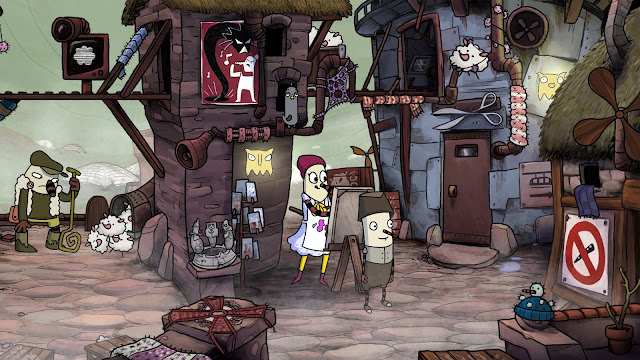 Fast forward and a boy named Robert has been petrified due to events that occurred in the first game, as a pigeon named Peck, it is up to the player to work through the first lot of puzzles to release Robert. It is then up to Robert to seek the titular Last Wind Monk, as they can restore peace back to Asposia. Sadly, Robert has to deal with an Asposian population driven to aid the antagonist in the mass extermination of an entire race of people by rounding them up and imprisoning them before execution. The idea of concentration camps, and the intended extermination of an entire group of people is a heavy, uncomfortable one, and it is told very well here.

Saving Robert was initially easier said than done as I foolishly skipped the controls tutorial, thinking it would be classic point and click affair. This definitely was not the case, as the controls were a bit confusing to begin with. Peck needs to be close to things he can interact with, then the square button is pushed to show nearby objects that can be interacted with, L1 and R1 rotate through these hotspots and then finally the cross button brings up a context sensitive menu to interact with the object. It does feel more much more complicated than necessary, but choosing to utilise the tutorial at the beginning of the game does alleviate this minor complaint.

Additionally, Peck and Robert can be switched between (as well as a third character later on) in different scenes. Each character has their own abilities and often respond to objects and the environment in different ways. Peck can fly around but can’t grab objects, and Robert can utilise his flute nose to summon the wind to solve problems, for example. 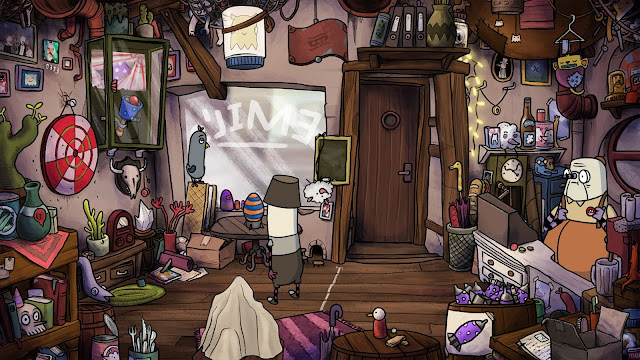 The dark themes of The Last Wind Monk underpin what is otherwise an innocent looking game. The hand drawn sprites are not immensely detailed but they look great. They do actually remind me of Gary Larson’s The Far Side. Not an entirely bad look, but one that definitely had me surprised at the underlying theme of the game itself. There are moments in the game where there is a lighter tone, many of the characters have quite goofy personalities, and there are some attempts at humour which do well to break up the bleakness of the story, without taking the game so far as to be tone deaf.

The puzzles themselves are hit and miss for the most part. Most of the puzzles in the game required a lot of trial and error, as well as lengthy multi-part setups in order to be solved. The developers seem to understand that these puzzles aren’t easy, as they offer what basically amounts to a complete walkthrough of the entire game in the menu. There were times where I had to use the guide to get clues, and when the solution was presented to me, I never felt like they were puzzles I would solve on my own, as they demanded an incredible stretch of the imagination to solve, beyond what could be reasonably expected of players based on the context of the information that they were given going into the puzzle.

The voice overs are overall done well and represent the characters in the games as needed. Most characters have an air of whimsy surrounding their voice, giving the game fantastical feel. The dialogue itself is also very well written, and gives the voice actors a quality platform to deliver their lines from. Most of the conversations between characters flow naturally and without a lot of awkward pauses, something difficult to do in point and click adventures. 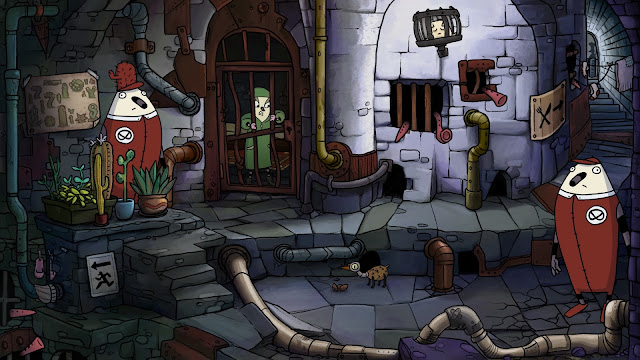 The Last Wind Monk has a weird place on the PlayStation 4. The first game in the series isn’t available on any console platform, so it’s unlikely that many PlayStation 4 owners would have played it. The game does not explain the events of the first game at all, and yet there is also some expected knowledge of the first game coming into this sequel to completely understand what’s going on. Do your research so you catch yourself up going in, though, and you’re in for a really well-written and vibrant adventure game. One that’s let down a little by obtuse puzzle design, but is otherwise highly engaging on every level.