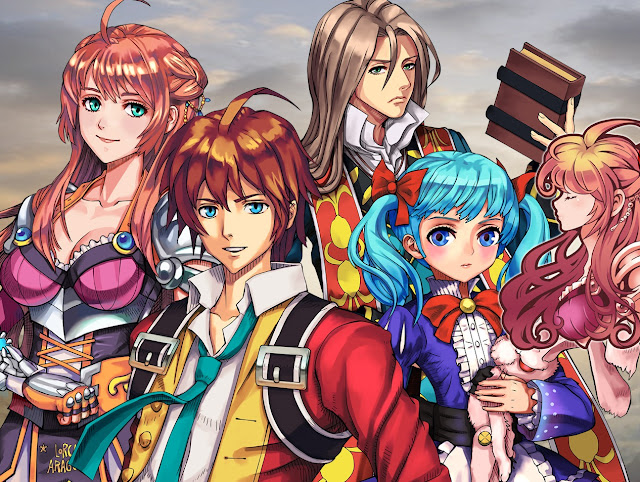 We all know what we’re getting from Kemco JRPGs by now, right? We all know that they’re micro-budget games with presentation that makes RPG Maker titles look like masterpieces by comparison. That in itself doesn’t need to be a bad thing, but most of Kemco’s games, including Revenant Saga, have been clearly thrown together in an incredibly short time with little real thought to storytelling, building compelling gameplay, balance or, frankly, effort.

It’s a pity because the combat system itself looks like it could have been fun. The game borrows a 3D turn-based engine that doesn’t look far removed from the PlayStation 1 era of the genre, and titles like Final Fantasy VII, VIII and IX. Whenever a battle happens, two sides of basic polygonal characters square off against one another, taking turns to flit across the screen and bop one another on the head until one side falls over. The presentation of these combat scenes are the highlight of the game, being instantly nostalgic as they are for any of us who grew up on the genre.

That’s where the positives stop, though. Before we even get into the non-combat bits of the game, the combat system itself is simply broken. It’s far, far, far too easy. I pushed the difficulty level up to its highest setting, and I was still cruising through the game. There were one or two sections right before a boss that I felt I needed to grind, but ten minutes later my characters had accumulated a couple of levels (because the experience point gap between levels was so low, not because battles were so frequent), and even then I was probably being overly cautious before taking on a boss; not once did I even get close to a game over screen. 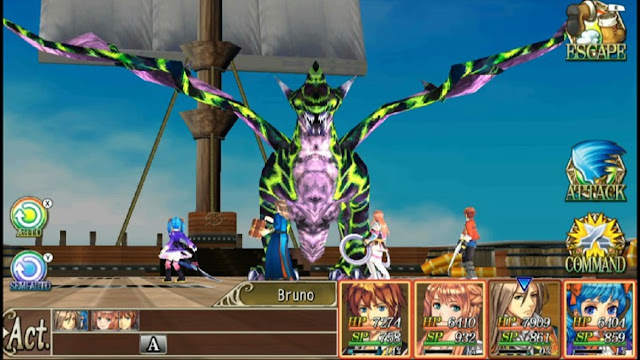 I don’t expect every game to be Dark Souls. In fact, I generally don’t care for outright hard games, but I like some kind of challenge in my games – particularly turn based JRPGs – so they can provide some mental stimulation. With Revenant Saga I rarely needed to use any of my character’s special abilities until bosses, and even then there were a handful of skills that were super effective on every boss, and I just needed to spam them. To damn the game further, there’s the ability to “transform” into an elite fighting form, a bit like how the girls in Hyperdimension Neptunia do. Minus the sexy leotards. Doing so greatly ups your character’s fighting abilities, but puts them at risk of going berserk and becoming a liability to their own side. Or at least that’s how it’s meant to work in theory. I never needed to actually use that ability, so easy was the game with normal, non-transformed characters. Similarly, there’s crafting and equipment upgrade systems in place, but I never needed to pay attention to this stuff, because I just didn’t need the edge in combat. And, again, this was on the highest difficulty setting.

I could almost forgive the game for being impossible to fail at, if the storytelling – or something else – compensated and kept me interested in the game. After all, Gust’s Blue Reflection was a ridiculously easy game itself, but the combination of superb storytelling, beautiful art, and ultra-cute girls more than made up for all that. Revenant Saga has none of that.

The story is so painfully generic that I guessed how it would finish within the first half hour of starting it. There’s a guy who has been possessed by a demon, and now he’s a revenant, complete with a nearly irresistible urge to eat people. However, he’s actively resisting the demon inside him, and in a twist of irony, teams up with a group of people who would kill him if they figured out what he was. And so starts a quest in which we, as players, get to enjoy any number of hamfisted “philosophies” around friendship and acceptance, while at the same time the group is on a quest for vengeance against an old fellow who creates revenants of his own and killed possessed-hero-man’s sweetheart. 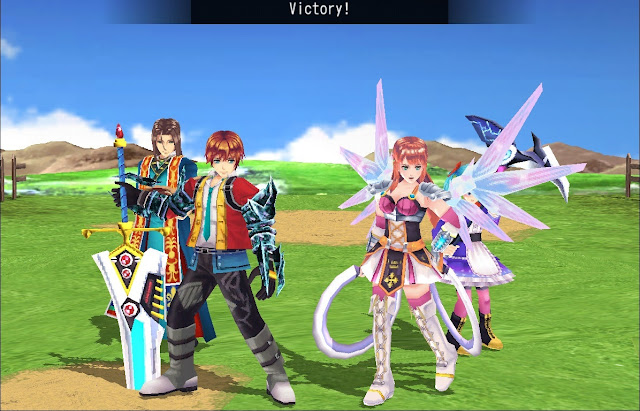 Sitting underneath this is a narrative structure that doesn’t even pretend to hide how utterly formulaic it is. “Travel from place A to B, be told to clear dungeon C, return to place B and be told to move on to place D… and from there dungeon E.” This formula is almost the entire game. Want to do side quests? Well, you’re going to have to backtrack to earlier places you’ve already visited, only to be sent on fetch quests to grind away at enemies for materials. I stopped doing side quests because the experience I was earning from doing so was making my team even more overpowered, and it’s not like any of these side quests had a remotely interesting story to tell.

Beyond those useless side quests, there’s almost nothing to actually do in Revenant Saga. Town areas are completely functional, with almost every building in them being a shop or “church” where you’ll get the bulk of your “go to XXXX dungeon” quests. These villages might be populated with a half dozen other people (all of which will later on be sidequest fodder if you happen to return to the town in question), and, if you’re lucky, one building that isn’t directly related to the game. Once, long ago, I was reading books on good level design in pen-and-paper RPGs, and one little tip really resonated with me: “have areas that are either empty or unrelated to the main quest.” Why? Because players tend to feel more like they’re in a “realistic” space when there are spaces and characters that are there simply to add character to the world. It’s something the Final Fantasy games of old did particularly well, with towns filled with characters that might only have one or two lines to say, but those lines would be flavour rather than quest-related, and while the developer of Revenant Saga may well have not have had the resources to indulge in unnecessary elements in their game, the lack of that kind of thing in the game nevertheless creates a spectacularly uninteresting world, with no sense of culture, history or lore.

I keep playing Kemco games because they do scratch something of an itch (and I’m a masochist); they’re braindead JRPGs for when I feel like “mashing buttons” without thinking. But on any metric that you could possibly apply to the game, Revenant Saga is poor. About the best thing I can say about it is that it’s not overly long, which in itself will sound like a criticism to some, but after witnessing Persona 5 ruin itself by being fifty hours too long, I’ve come to admire JRPGs that know not to outstay their welcome. Revenant Saga at least knows that its ability to hold my attention is limited.