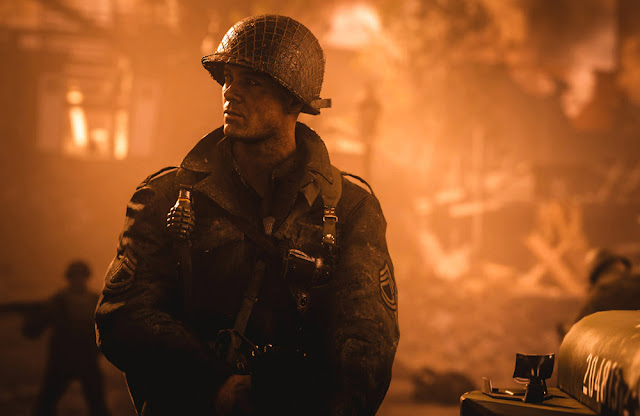 “This is married to a generous aim assist and assorted impact effects that, simply put, make shooting things wonderful.” [Emphasis mine]

That’s an actual quote from an actual review of Activision’s Call of Duty: World War II—not from some unheard of site or no-name YouTuber, but from the Guardian of all places. A game about a real war in which millions of people died, which was tragic and brutal for all involved, gets praised for making shooting people feel “wonderful”.

“Getting the feel right is no small achievement for a shooter, and CoD: WWII does that, and then some. This is a precision game, its high notes accentuated by incredible sound design: the “shoonk” as you land a headshot is satisfying at an unfathomably subterranean level. Gun recoil remains relatively light, but the jarring flinch when taking fire more than compensates. Each weapon has its idiosyncrasies and gorgeously elaborate reload animation.”

Related reading: Matt S. looks at the problems with Sledgehammer Games’ description of WWII as a “social space”

More concerning is the fact that The Guardian’s comments are far from unusual; comments about how “fun”, “exciting”, and “awesome” it is to shoot people are a constant theme across all the game’s reviews.

“It’s run-and-gun, but that’s CoD’s niche, and when done as well as this, it’s an awesome niche.”

“The stand-out weapons are definitely the flamethrower (a map specific special weapon) and the incendiary shotgun.”

“… unloading a bucket of incendiary shotgun shells into the enemy as Expeditionary is exhilarating.”

“War is the premiere new multiplayer mode in WWII and brings with it exciting team-based objectives.”

And so it goes on. There are hundreds of reviews, mostly praiseworthy, talking about how much fun this World War II game is. Many a review lauds the gunplay in one paragraph, while in another it sings praises for a more “honest” story that looks at the horrors of war—as though those two things aren’t fundamentally incompatible. Few writers seemed to notice (or care) about how this apparently deep narrative uncritically paints the American forces as noble, heroic underdogs driven by patriotism, honour, and duty. Call of Duty: World War II is still propaganda for the American military and a celebration of war.

(That Activision’s CEO, in an interview with Newsweek, could describe Sledgehammer games as “historians” who explored World War II with “authenticity” and “tremendous care” is particularly insulting.)

This isn’t unusual, of course. Call of Duty is one of the biggest game franchises in the world, and its developers have spent years figuring out how to make its shooting mechanics as punchy and satisfying as possible. But, at least for the last decade, the series’ celebration of war and American nationalism—problematic as such things are—didn’t blatantly disrespect the lives and sacrifices of 60 million people.

If you’re going to make a game about a real-life historical war, you have to do it with sensitivity and authenticity. And no, that doesn’t just mean painting the American military as noble underdog heroes the way Call of Duty does; it means showing the ugliness of war, and the ugliness of all sides of war. Even World War II’s European theatre, as necessary as stopping the Nazi regime was, was filled with horror. I’m not just talking about the Axis powers, either; the so-called “heroes” were responsible for their own share of atrocities, and and doing history justice means not painting over those parts. War is ugly, and World War II was uglier than most. Any game that tries to take a World War II setting and make it “fun” has already failed.

Likewise, any critic that praises the “fun” of a World War II game has failed. Stripped of all context, Call of Duty: World War II is a fun game. It’s polished, guns feel weighty and shots impactful, and there’s a myriad of things to do and ways to play. You can have one-on-one pit fights or take part in large-scale, objective-driven skirmishes. You can fight waves of Nazi zombies. You can play a sort of American football but with guns.

But you can’t strip a World War II-set game of its World War II context, and war shouldn’t be “fun”. To make a game that looks for the “fun” in World War II is to reject the whole point of remembering and commemorating the war. To praise a World War II game for being “fun” is to do exactly the same, and suggest that the war itself was in some way a “satisfying” (or “awesome”, or “wonderful) experience.

There are, at least, a few critics out there willing to look past the “fun” and explore the bigger picture of what Call of Duty: World War II represents. In a scathing review, Ars Technica called the game out for how it “glosses over or outright ignores the ideology and crimes of the war while also painting it as just another hoorah victory in US military history.”

“WWII is not one man’s story, which makes Daniels and company’s push into German territory, thousands of enemy soldiers dead by the player’s aim and the Allies’ assured success, feel especially absurd,” reads PC Gamer’s review. “Call of Duty: WWII stops feeling historical beyond appearances pretty quickly, like the abridged version of the abridged Band of Brothers.”

An article from Waypoint prior to the game’s release questioned whether Call of Duty: World War II would be able to the history justice: “One reason The Pacific sticks with me is how radically it departs from the ‘good war’ narrative of the other Spielberg productions and re-examines the conflict from another perspective. Call of Duty: WWII, at least from what I’ve seen so far, doesn’t appear to do that.” The piece also touched on the fact that the effects of the war are still felt, to this day, in places like Germany and Japan, and any America-centric portrayal of the war ignores that.

But still, the most potent, insightful, and relevant commentary of Call of Duty: World War II came just days after it was announced, and from a satirical site, of all places. “Incredible: This Veteran Gave Both Of His Legs So That The Video Game Industry Could Endlessly Glamourise His Suffering”, the Point and Clickbait article is titled, and it’s exactly the kind of gut-punch that any media concerning World War II should be.

Any game that tries to make World War II into something “fun” is a middle finger to every single person who died in it, and every critic praising the game for its “fun” is complicit.

Visual Novel Maker is all that and more