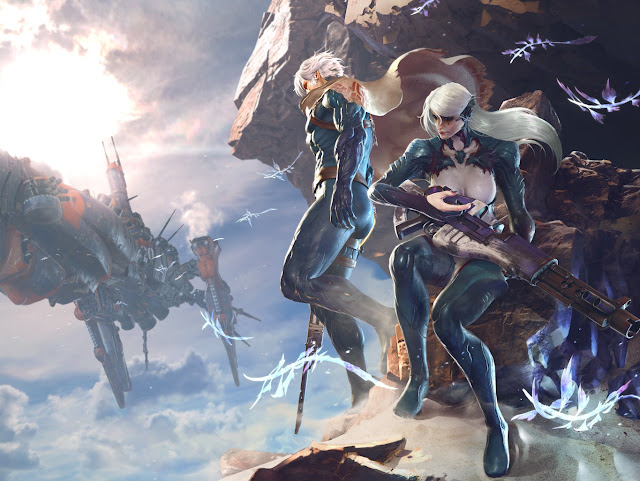 MercurySteam is a Spanish studio which should be familiar to fans of Castlevania and now Metroid – it has been the one championing those respective franchises with new entries long after their original developers moved on to different projects. But MercurySteam has been less prolific in coming up with ideas of its own. In fact, it has never actually done one without attaching a big name to it, so Raiders of the Broken Planet, a new IP from the team, is a curiosity in itself, especially for the many new fans the developer has picked up in recent years.

Related reading: One incredible Free-to-Play game on PlayStation 4 is Let It Die.

Raiders is a sci-fi third-person shooter focused around an online multiplayer campaign experience. The last time MercurySteam worked on an original idea, it was Clive Barker’s Jericho back in 2007. Anyone who remembers that would remember it as a flawed but interesting game that had its rough edges but also lots of unique ideas. Raiders of the Broken Planet feels like the opposite of that – it’s a genre title to its core, taking inspiration from lots of similar titles before it in order to craft something that’s undeniably commercial, but it’s also a bit of a retread.

The core gameplay is built around an asymmetric competitive multiplayer experience where one team of four human raiders is pitted against another team of AI enemies and one human nemesis. The team of four must cooperate to complete tasks in a time limit without dying, while the nemesis is trying to force a failed mission for the raider team. We’ve seen AAA developers try their best to deliver asymmetric multiplayer in games like Evolve and the now cancelled Fable Legends, but it proves to be a tough genre to crack – it’s difficult to balance, and developers need to encourage players to play both sides for a sustainable online community to form. MercurySteam takes a different approach – despite the fact that the teams are unbalanced, playing as a Nemesis is virtually identical to playing as a Raider: you have the same guns and same stats, the only difference is that the Nemesis needs to be craftier in which targets they pick lest the whole team of four gangs up on them. I’m somewhat ambivalent about this setup – it doesn’t offer the unique play situations that asymmetric multiplayer has the potential to facilitate, but I have faith that creative players will figure out some way to make it work. 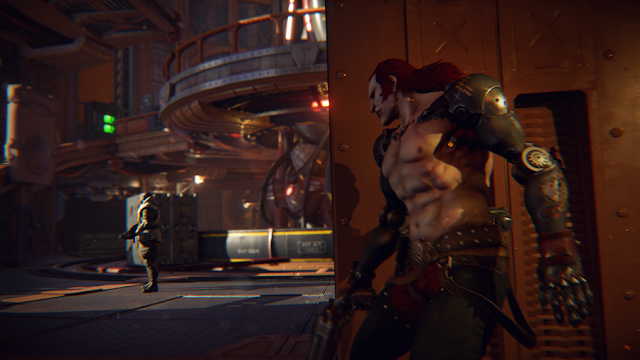 The other key focus that makes Raiders unique is a rock-paper-scissors style melee attack system – one button delivers quick, combo-able attacks, another is an instant kill that leaves you vulnerable while charging and another is a block which breaks combos. Melee moves in shooters have traditionally been either useless or extremely situational, but MercurySteam isn’t having any of that. In Raiders, melee kills are the only way to restore ammunition – not even dying and respawning will bring it back – so at some point in the game you’ll absolutely need to introduce opponents to some CQC. It reminds me a little of how Doom 2016 handled health-pickups with its melee kill mechanic, but that was in single-player, and so it avoids many of the balance problems Raiders runs into. So that players trying to melee have some fighting chance to get into range, MercurySteam seems to have toned down the effectiveness of all firearms. Most characters can take a good half-dozen or so gunshots without dying, and most guns have some kind of horrible drawback such as having to spin a barrel to avoid overheating, or having reload times longer than it takes to empty a clip. Those instant melee kills I mentioned also can’t get interrupted by bullets, since they’re only stopped by quick melee attacks. If this is starting to sound like a frustrating system you’d be right: very rarely does it all work together smoothly. The result is that melee attacks feel unwieldy and make you vulnerable, while guns feel much less powerful than they ought to.

Raiders of a Broken Planet also features the super trendy hero system popularised by the MOBA genre and then adapted by Overwatch. The current build of the game features almost a dozen playable heroes, all with different statistics, weapon types and special abilities. Unfortunately, not many of the heroes had kits which struck me as unique – they’re all stuff like area shields, teleports and decoys, and the heroes tend to play quite similarly to each other as well. Whereas Team Fortress 2 and Overwatch designed their characters to challenge what an ordinary shooter should feel like, MercurySteam’s characters all kind of conform to shooter archetypes: there’s the minigun guy with lots of health, the zippy assault rifle character, the sniper who is fragile but can get to remote areas easily, and I could never shake the feeling that I had played a character just like this in a different game. They also start to look the same after a while too – Raiders runs on MercurySteam’s in-house engine which is the conceptual opposite of Koei Tecmo’s Soft Engine: it’s great at rendering big chunky models but the end result is that most characters look like solid and very inhuman bulging blobs of muscle.

I’ve named dropped a lot of games so far, but Raiders is going to have a leg up on all of them because of its free to play status. It’s incredibly easy to get into the game if you’ve got a PS4 and are a fan of shooters of any kind. The two free levels which comprise the Prologue are excellent demonstrations of every core gameplay mechanic offered, and it’s not difficult to find a match with four players and an antagonist. If you’re interested enough to bite, you’ll want to purchase additional campaign packs that offer new scenarios and playable heroes, or even the season pass which pre-unlocks all the content as it becomes available. This is all premium content – impossible to unlock without paying money – so it would be interesting to see how the online ecosystem changes depending on which players have bought which campaigns, although if you enjoyed the Prologue then I’d recommend purchasing at least an additional campaign pack. 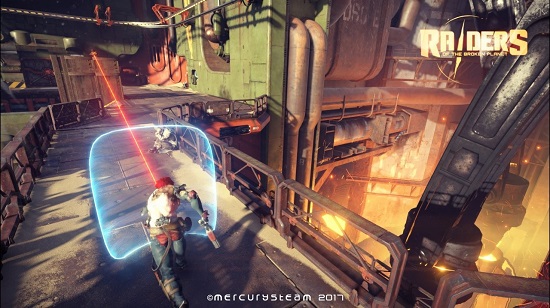 In the long run however, I can’t see the current payment method doing anything but damage to MercurySteam’s own game. Raiders of the Broken Planet is absolutely a co-op experience, with well-designed levels that require players to focus their attention on different things while still looking out for their teammates. It’s possible to play every level solo, but it’s absolutely something you’d want to play with friends. Online multiplayer in its current state is already turbulent: without countermeasures to prevent players from leaving halfway through, I’ve waited long times to find a match only for it to end in a disappointing surrender as people drop out mid way through. You’d think that there would be some balancing mechanics in place, even as simple as replacing the quitter with a bot, or reducing the amount of CPU enemy spawns, but Raiders of the Broken Planet does neither of those things and instead simply leaves teams of two or three to suffer. I imagine things will get worse when more campaign packs are released and there will be a greater disparity between what players own and what they don’t.

There’s also the problem of the game’s lore, which has signs of potential but is lacking in its execution. The premise is that there’s a planet, somewhere, which is full of a resource that provides infinite energy, bodily augmentations, faster than light travel and I can’t even finish this sentence because this is literally the Macguffin to end all Macguffins. The players are a band of raiders fighting against invading humans who wish to mine the planet and profit off it, and while there’s potentially some interesting subtext about colonisation at play (the humans are the villains in this case), I don’t see it happening. The really interesting lore is locked behind in-game currency walls – the same currency you fight over once completing a mission, and which is used to unlock new guns, and we all know what we’d pick if given a choice between guns and story. The cutscenes are filled with sweary insulting and vague statements which just feels like pandering to what the writers must think “cool gamers” enjoy, and I’m sure everyone will skip them anyway.

I’m still finding it hard to properly judge Raiders of a Broken Planet because of how new and sparse the current build is – with only a prologue and one pack of missions it can be daunting to get a season pass without knowing if the community will stay loyal for that long. What I hope MercurySteam do give more of is the co-op moments: missions which split up the party of four raiders to doing disparate tasks, which gives a clearer opportunity for the Nemesis to play cat-and-mouse with the opponent’s team. What I want less is this big desire to be just like every other online shooter – to be comparable to the likes of Destiny or Overwatch – because that’s not a fight which Raiders of the Broken Planet is primed to win no matter how much polish gets added.