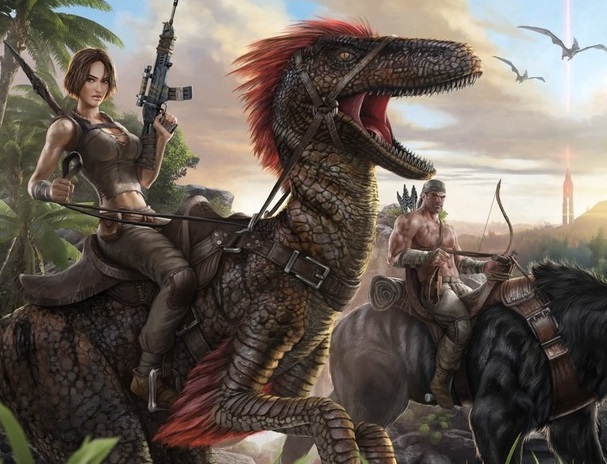 Ark: Survival Evolved has just recently launched from the lengthy Early Access period that it has been through. Now we supposedly have the full game. Debate over whether Early Access is a good thing for game development or not aside, after years of development, multiple expansions, tweaking and balancing, the final version does indeed feel smoother and more accessible to get into.

Everything about Ark is big. From the scope of its goals, to the landmasses and the dinosaurs found within. It’s a bit intimidating the first time, especially since you are thrown face first into the ground and are given zero instructions on what to do. Getting back into it after a break from the Early Access test, however, it was immediately clear how much smoother everything had become, and it won’t take anyone long to come to terms with the game’s real strength; that it’s all about exploration.

Like the others in its style, Ark doesn’t give you instructions and lets you figure everything out on your own, or by through the massive wikis that exist on the Internet. If there is a single benefit to a survival game going through an Early Access period, it’s that there’s already a wealth of advice available for players getting into it now that it is a “proper” release. It really is a wonderful age that we live in. So whether you figure things out on your own or use the collective knowledge of the interwebs, creating you first settlement doesn’t take as long as it used to as even the default settings allow for a quick and easy way in. 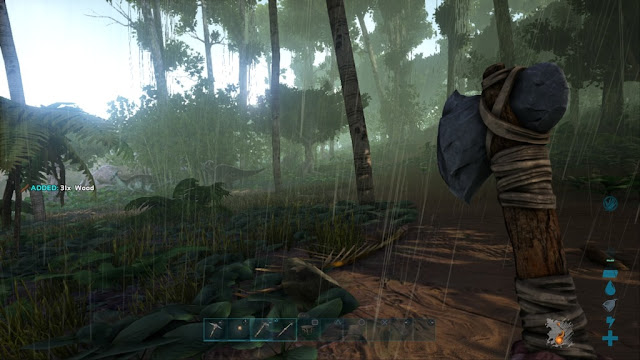 The goal of Ark is a simple one. Survive. I mean, it is in the title, right? To do so however you’ll need to get moving, and quickly get your hands on whatever happens to be lying around to start building tools… unless the idea of sitting on a beach and either starving to death or dehydration appeals to you. While you can do whatever you actually want from that point forward, such as building settlements, outposts and villages, or simply running around taming and breeding dinosaurs, the underlying fact is that in that early going you have to simply figure out a way to survive both the physical environment and your own bodily needs.

Thankfully, there’s a lot you can do to improve your odds of survival. Hitting rocks and trees will give you access to pickaxes and hatchets at early levels, which will in turn lead into the options to learn how to thatch some housing up, and make some highly effective spears to hunt things for meat instead of subsisting on a fruit berry only diet. The higher the level you get to, the more you can do. Despite all this, there are times where the overall experience feels a bit limited, and that’s because Ark, while being perfectly okay with being experienced on your own at your own pace, is really designed to play with others. And sometimes it’s not worth it.

Online has a few options. The first is to jump into any possible server that happens to have free space. Next there’s playing with others in a self-hosted game and finally there’s having a dedicated hosted server of your own. While most of the above are not issues, the people inside of them are. Being very territorial if you’ve “crossed into their space” they’ll hunt you down if you don’t give up whatever you’re carrying and then possibly lock you in a box, because you can learn to make those as you level up. You could say that this competitiveness is part-and-parcel for the genre, but it nevertheless gets draining, and oddly enough adds too much repetition to a game that’s meant to be open. 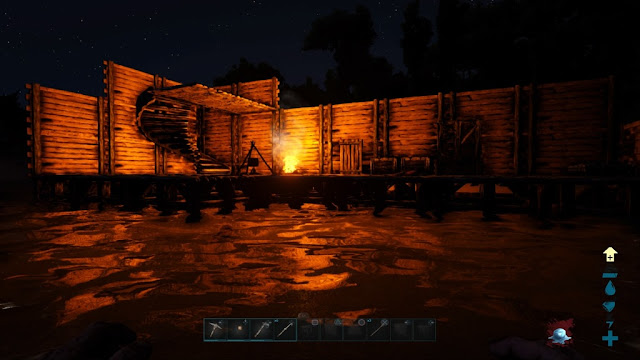 To ensure that you’re playing with people who actually want to enjoy the game wit you, there is the option of hosting your own dedicated server, but for that you would need two PS4s of your own. One to be the host and to leave on if you wanted others to join whenever, and another one to actually play on. The other option would be to get a hosting package which you could then run off of a computer but that of course costs money for the hosting. Is it worth the trouble? If you are planning on playing a long time and have the crowd to do it with I would say yes as Ark is much more enjoyable as a group than it is on your own. But it’s still a big investment into a single game, whichever way you look at it.

Assuming you can get a decent group of people together, the co-operative game can be a delight. Yes it’s possible to play alone but everything takes a long time and when you’re leveling you need to make sure you’re able to do a bit of everything yourself. With a group tasks can be split between the group and acquiring everything for doing the projects takes much less time because of the amount of people driving the project forward.

The PS4 does still have some issues running Ark with lag spikes and framerate issues. The severity of these can be different from person to person depending on whether they’re using a standard PlayStation 4 or Pro model, and also if you’ve swapped the HDD for a more powerful one (7200 RPM instead of 5400) or an SSD. Having played and tested it on both a standard stock launch and my own modified larger HDD with the speed enhancement, the issues were less on mine but there nonetheless. 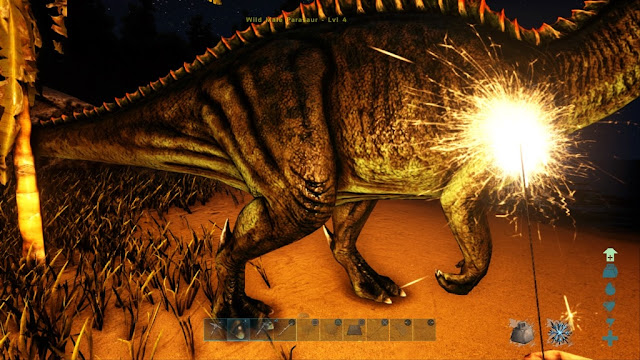 Like a lot of of titles in this genre, Ark: Survival Evolved has a steep learning curve and requires quite the time – and possibly financial – investment. But once you get into the rhythm of it, the endless need to survive, set against the simple satisfaction of slowly building up your capacity to do so, makes this a game that could well turn into a hobby for you, all in itself.

Aussies are looking to bring back classic Heretic gameplay – WHOO!