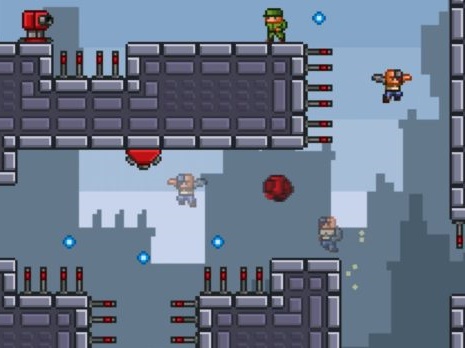 League of Evil is a platforming game, upholding the convention of short, difficult levels as codified by Super Meat Boy. Developed by Ratalalka Games and originally released for iOS, the game saw release for Switch recently, capitalising on the console’s penchant for short and portable games. It ships with over 100 levels and a level editor offering near endless replay value, but is it something you’ll want to be playing for that long?

Ratalalka Games have developed a very standard platformer here. The jump controls are tight, there’s a convenient double-jump and good wall-jumping mechanics, and it’s imprecise enough to be challenging but not floaty enough to be frustrating. Levels are all designed around precision rather than timing or planning, with lots of spikes, rotating deathtraps and enemies which fire on sight. From the get go, gameplay is all about improvisation and twitch reflexes. You play as some kind of bionic commando fighting against the nominal League of Evil, solving problems such as avoiding spikes and punching heads off people in labcoats.

The level design manages to bring the difficulty once all the key mechanics are introduced. There’s overall very little down time where you’re not moving, and it all comes together as one very twitchy game. Nearly all levels can be successfully completed in less than 30 seconds, though you’ll need to add a couple of minutes to account for failed attempts. Death is plentiful, but respawn times are so quick that it barely feels like a punishment. I did like how collectibles were handled – rather than deluge the player in coins, every level has a single optional briefcase placed in a tough-to-reach area. It’s a little nominal reward for players wanting a little more challenge, and Ratalalka’s own levels capitalise on this effectively. 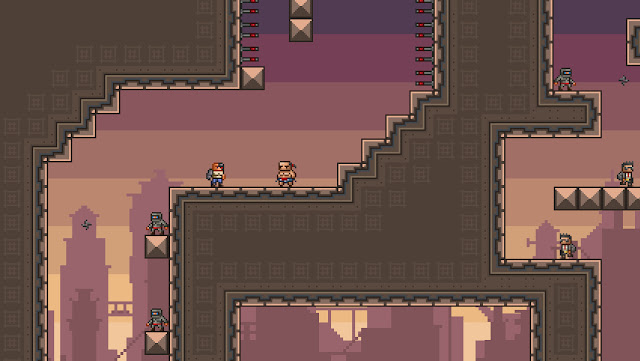 Unfortunately, it’s the little quality of life issues which hold League of Evil back from being a must-buy. I’m going to sound like I’m nitpicking here but the little things add up: the sprite animation for jumping and double-jumping is the same, so in the heat of the action you’re never be completely sure if you’ve got another jump. Enemies also don’t give any indication for when they’re about to shoot, so you’ll occasionally walk into a bullet you weren’t expecting. Levels are nice and zoomed out, but there’s still the odd leap-into-unseen-spikes trick.

League of Evil also ships as one of the first Switch games to feature a level editor, although this mechanic also feels half-baked. The editor itself is robust: it gives players access to every mechanic available in the game, and although the menu can be fiddly it’s not hard to make a functional level. The social features attached to the editor, however, are some of the worst I’ve seen. The game requires you to consent to a lengthy document essentially declaring that levels you make are no longer your property once they’re uploaded. This is presumably done so that the developers can make level-packs from user made content, but it comes with the implication that the game does not value the creativity and individuality of its players.

Some of my favourite times spent with level editors in other games have been used on pushing the engine to its limits, to repurpose the tools in inventive or unpredictable ways and see how other players react to my developments. This is straight up impossible to do in League of Evil – once you’ve uploaded a level it’s gone into the aether, without any usernames or menus for the original designer to keep track of it. If I play someone else’s level and like it, there’s also no way to let that designer know. I could give it a high star rating, but that rating is invisible to the public. With all these missing features, there’s no way the level editor could possibly be a celebration of player creativity, and there’s little reason to continue toying around with it. 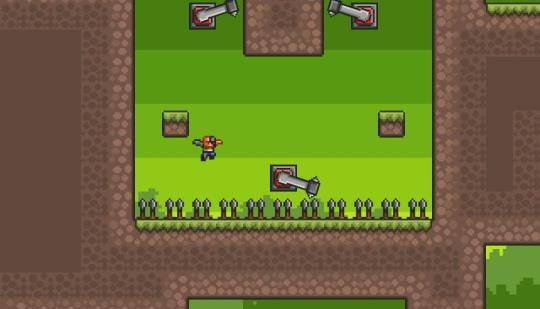 It saddens me to say that League of Evil is just a simple platformer game and not much more. On a platform which doesn’t have a port of Super Meat Boy, League of Evil fills its niche serviceably – but it’s not a glowing example of its genre and it’s not something I can recommend easily unless you absolutely must have a platformer on your system. And even then you’ve got Shantae and Shovel Knight sitting there waiting to be played instead.