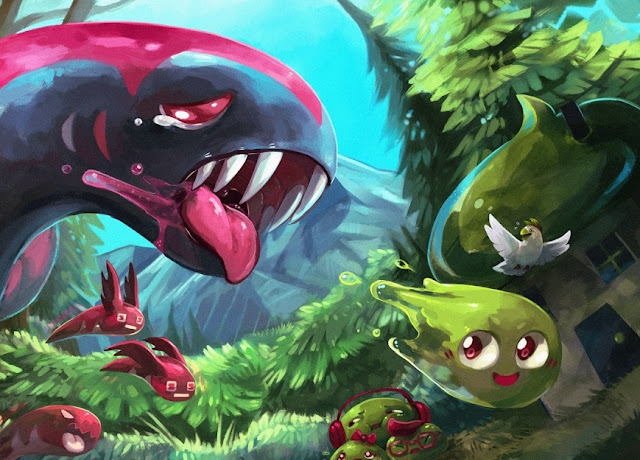 What an odd-looking game Slime-San is. I have voiced my opinion many times when it comes to the constant barrage of too many 8-bit style games being released post-2015, but Fabrik Games describe Slime-San as “5-bit” due to the fact that it only uses five colours the entire time. Perhaps due to this fact I’m giving it a pass when it comes to my 8-bit fatigue!

Actually, the real reason I’m giving Fabrik Games a pass though is because Slime-San is such a nifty little game that is very hard to ignore. Slime-San has been eaten by a worm, and it is up to him and his tiny bird pal to traverse their way through a number of stages inside that aforementioned worm in order to escape. While the stages don’t necessarily follow the scientific anatomy of a worm, they are for the most part very well designed, with most stages taking around five minutes to finish. Each stage contains four smaller segments, and each segment takes place over a single screen. Many of these stages were difficult enough that my Slime-San died on numerous occasions, but depending on the stage, it is easy enough to learn how to get through the stage. Sadly, on the odd occasion, it boils down to quick reflexes rather than learning the lay of the level, of which my aging body is discovering isn’t quite as fast as they used to be!

Slime-San for the most part controls well enough. It is harder to use the Joy-Cons over a pro controller due to the lack of a proper D-Pad, and I’ve never been a fan of using an analog stick on a 2D platformer. Some moments where precision jumping is key, it can be a pain at times if I wasn’t able to change directions fast enough. Much of this simply boils down to my own ability coupled with the design of the Joy-Cons, so it’s not so much the game’s fault here, I’m just recommending the Pro Controller over the Joy-Cons for more accurate controls. 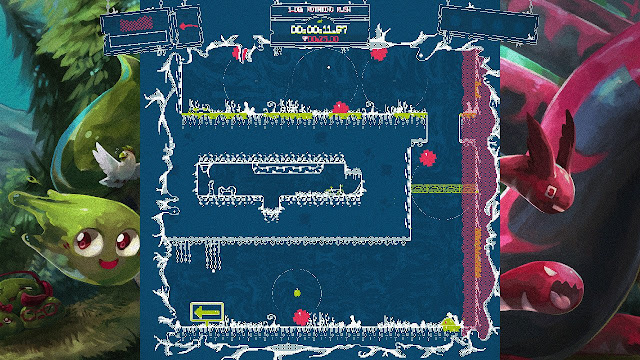 As mentioned earlier, Slime-San only uses five colours. Red, green, two shade of blue and white. Because of this, the game looks like an old Game Boy game run through a Super Game Boy. With such intricate detail in some of the levels, there is a lot of stuff happening on the screen all at once and can become disorienting at times. On one occasion, it took me a couple of minutes just to find Slime-San’s starting point in the level.

There is a method to the madness of the lack of colours chosen however. The main focus being on green and red. Slime-San is killed by anything red on any given level. This can be red buzz saws, red slime on a wall, lava and more. Slime-San bounces off of green items, so can be launched by green objects into certain doom or to a previously unreachable platform. Slime-San can turn transparent and travel through green objects when needed. This slows down the play too which helps with getting past those tricky sections.

This isn’t all, either. Slime-San gets access to other abilities such as a dash that not only lets Slime-San travel further while jumping, it also knocks blocks out of the way. As the game goes on, Slime-San gains the opportunity to be swapped out with other Slimes with other abilities such as double jump, fast falling, longer dashes and more. It’s a cool way to extend the life of the game by seeing how to tackle a level with a different ability Slime. Each Slime requires an almost completely new strategy to reach the end of each level, requiring the player to investigate each level thoroughly to ensure safe passage to the other side. Though this is oftentimes tough to do as well, considering most levels have a bunch of red stuff will start creeping up towards Slime-San and requires his swift movement towards the exit. 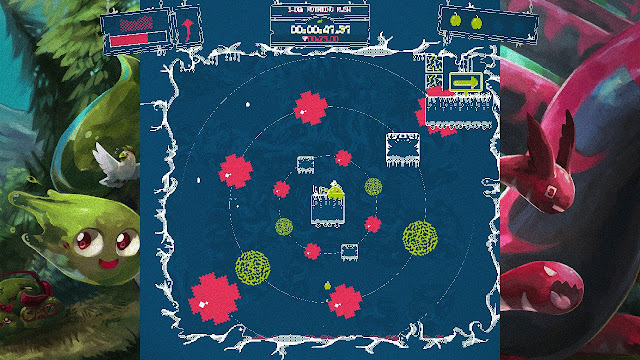 There isn’t just a bunch of levels to play through in Slime-San either, there is actually an entire town that has been taken in by the worm. The inhabitants of the town sell Slime-San a bunch of things such as artworks, other slimes to play as and more. The currency in Slime-San consists of apples and coins, which can be found in a number of levels in the game. Slime-San can use these apples to purchase these items. The apples can be a nightmare to reach as well, to the point I decided it wasn’t worth upgrading Slime-San for some of the apples in the game.

The game keeps its light-hearted feel by including some jokes and inside development knowledge during some of its loading screens. My particular favourite is when the words “Britt used mashed banana to make the slime noises”. This managed to make me feel both amused and completely disgusted at the same time.

Slime-San has been previously released on PC before, but is one of those games that just feels perfect for the Nintendo Switch. There is a perfect pick up and play aspect that allows players to play in short bursts on public transport as well as a longer session at home on the big screen if they so desire. I admit I was a little worried about the Switch’s ability to score a constant stream of quality games from third parties, but it’s games like Slime-San that have removed that doubt completely.