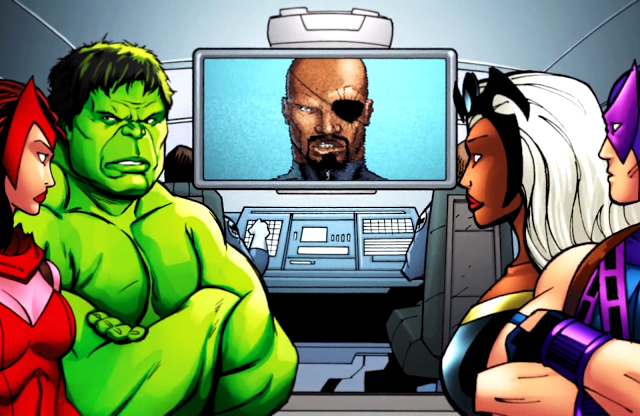 My introduction to Marvel comic characters was in my late teens. I grew up with a single mom and a younger sister, and I didn’t have any exposure in childhood as many do. Sure, I had heard of Spider-man, but in all honesty that was the extent of my knowledge (my sister, friends, and I were more into Power Rangers and Sailor Moon). But then the X-Men films started coming out, and I started dating a comic geek, and it could be avoided no longer. I instantly fell in love with the X-Men, Jean Grey being a favourite with Rogue in a close second. That, as they say, was the beginning of the end.

I started asking questions and learning about the basics. Marvel versus DC, how each company is different and who belongs to either brand. I learned there has been multiple reboots in the Marvel universe, confusing me to no end at the time. Since then, over a decade has passed. The relationship ended, again over a decade ago. But there was a true love that blossomed from that failed infatuation: Lindsay and Marvel. Marvel and Lindsay. Marvel treats me well enough, although sometimes the storylines infuriate me and film choices leave me scratching my head. I’m not a DC girl. The characters have never interested me. But I’ve grown into the Marvel world. Scarlet Witch is my absolute favourite character, as her power to manipulate probability is just plain nifty. Jean Grey is still up there. I admire Jessica Jones to no end, minus the minor alcoholic thing. I think Hellcat has an unexpected backstory and an amazing outfit. She-Hulk is a brilliant lawyer. I could go on and on. And on. And on.

Part of how I gained information on the universe early on was through playing PlayStation 2. I actually purchased a PS2 slim solely to be able to play X-Men Legends. My memories of specifics are hazy; I think they were replaced with oodles of Marvel facts. But the memories of the feeling the game (and its sequel) gave me remain, a warm fuzzy glow that spreads from my head to my toes when I think about chilling on the couch and running around as Jean Grey. 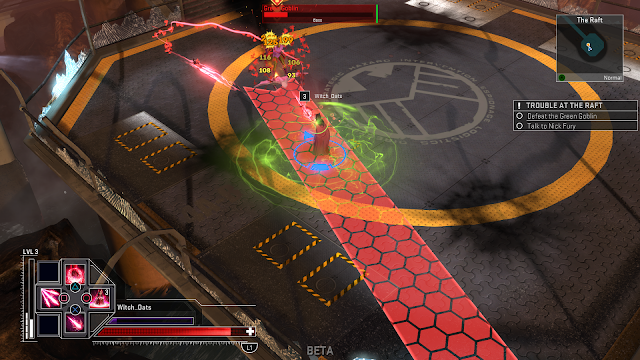 You’re probably wondering why I’ve rambled for three entire paragraphs about a part of my life that occurred a decade ago. The answer is simple: Marvel Omega Heroes brings back a flood of those fuzzy feelings and encompasses similar gameplay to X-Men Legends while bringing in characters expanding far past just Professor X’s clan. I can finally play as Scarlet Witch without being in Lego form. My life is complete. I can die happy.

Marvel Omega heroes brings together heroes from across the universe as they team up to defeat Doctor Doom and his minions. Doctor Doom is such an iconic villain and it is wonderful that he is the driving force of the story. Speaking of: the story is written by Brian Michael Bendis. You may not recognize his name (poor comic writers often get outshined by their creations!) but he’s behind perhaps House of M, New Avengers, Ultimate Spider-Man, and more. In the game, Doctor Doom has control of the Cosmic Cube. Of course, the Cube is extremely powerful and can change reality in an instant. Doom isn’t the first villain to gain the Cube’s power, but he’s damned determined to make sure he’s the first to succeed at changing the world to his vision. He’s had to join forces with dozens of other villains (some even super) to create a barrier the Marvel heroes cannot penetrate. Since the villains are working together, it’s obvious that the heroes also need to join forces to defeat Doom and keep the world as it is.

When I say heroes, I mean more than I can remember off the top of my head. Captain Marvel, Captain America, Thor, Scarlet Witch, Iron Man, Wolverine, Black Widow, Deadpool… at least one of anybody’s top three characters will be available, and odds are more than that will be. The roster is impressively massive, with some characters having multiple outfits available. The paywall prevents players from leveling up the heroes past level ten, but they can play with as many as they want up to that point with additional heroes being able to be earned for free while progressing. 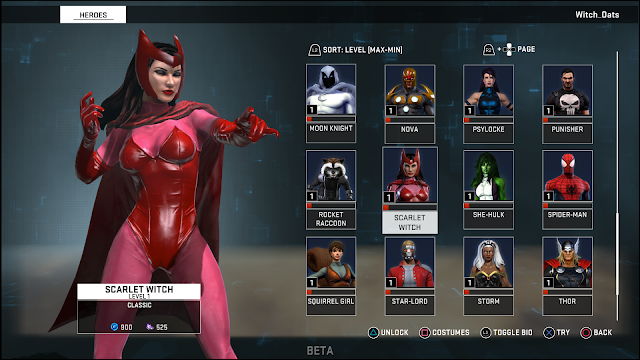 The gameplay in Marvel Omega Heroes echoes that of X-Men Legends. The camera is static, a great frustration in this day and age, but the world is designed so that it is rarely a frustration factor so I can let it slide. The style is definitively a combination of action/RPG with a dash of MMO due to the ability to play alongside other worldwide players. Each character has a different set of abilities that can be improved and expanded upon by continuing to play with them. New items allow an increase to base stats, or can be sold for cash if they won’t do your character any good. The characters and their costumes are a fantastic blend of classic comic, current films, and contemporary comic options. Some options only open up at later levels (for examples, relics open at level 20) so this is one place where the paywall won’t give players a complete experience.

Locations and levels are intuitive and familiar. Home base begins as the S.H.I.E.L.D. Helicarrier but soon changes to the large open space in Avengers Tower, filled to the brim with contemporary fixtures and furniture. Other players online appear alongside you, differentiated from static characters and salespeople by the username displayed above their heads. Avengers Tower is the centre of the game. It is where your player is completely safe from enemies, so I often warp back to change my gear without fear of being shot at. My favourite part is speaking the characters about Marvel lore, and I got a kick out of being Scarlet Witch and asking Wonder Man about the past (Vision is mentally part Wonder Man, and Wanda loves Vision, so it’s like she’s speaking to a part of him). Avengers Tower is also home to several retailers and scientists, each specializing in a type of item or research/development. This is where the game’s basic in-game currency comes in handy, whereas the premium currency can be spent on loot boxes and other special/rare items.

The level maps are created as locales explored, and I see each area as though it’s made of Lego: destroy everything. Leave no car unturned, no dumpster without flames, no enemy still standing. This is how I am able to find lots of coins and items to level up my precious Wanda. I call this personal style of gameplay Lego Rules, and anyone who has played on of the Lego titles will know exactly what I mean when I say that. When venturing through the story, markers will appear to help guide players to where they need to do. As in Avengers Tower, other players currently in the same area will appear live alongside your hero. There is also an option for couch co-op (I’m kicking myself for owning only one PS4 controller, trust me) which brings me back to the good old X-Men Legends memories. The levels are extremely familiar, and I especially enjoy exploring Hell’s Kitchen as it mirrors the Marvel Netflix shows (Jessica Jones, Luke Cage, etc.) quite closely. I’m often like a child riding into an amusement park: “Look! That’s Luke’s bar!” and “Look! That’s where the accident happened!” 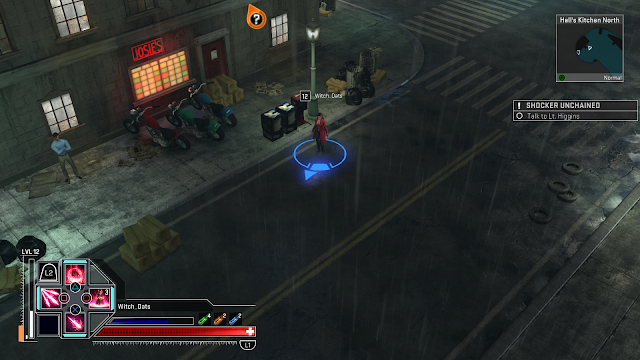 Unfortunately, all good things must come to an end. Perhaps I’m burying the lead because it makes me unhappy despite the otherwise warm glow that encompasses me while playing Marvel Heroes Omega. It’s free-to-play and filled – FILLED – with microtransactions. You could probably play without spending a dime, but the experience really would be lackluster quite quickly. That being said, I’m happy to spend money on the game because of the nostalgia it gives me. Emotions are a strong thing, friends! The game is wonderful for all the other reasons I’ve explained, of course… but it’s the warm fuzzies that sell me more than the facts, at least monetarily. The free-to-play model at least allows for consistent updates, so I expect tie-ins for film (and hopefully comic) events.

Another good thing that must come to an end? This review. I’m sorry, I’m sorry, but you knew this was coming! I’ve raved so much about the nostalgia factor, the character options, the gameplay, and the world created that I am itching to get back to the game instantly. The game plays intuitively on all fronts, from which buttons to push (such excitement!) to menus and actual world elements. The character roster is beyond comparison, and I haven’t even mentioned Black Cat, Spider-Gwen, Winter Soldier… I’m consistently being reminded of the characters and the universe that I hold dear to my heart. The story is written by someone well-versed in the world it is set within and features a classic supervillain with a name most are familiar with. I honestly believe that Marvel Heroes Omega is the single best Marvel-based game to be released since the Legends games two console generations ago, and that’s saying something considering my – to put it nicely – disinterest in free-to-play games. But I am happy to buy into something so wonderful, I really am. Is Omega Heroes something especially new and exciting? No. But familiar and fun proves to be just as great.

A new Atelier has been announced, and it’s a tale of two sisters