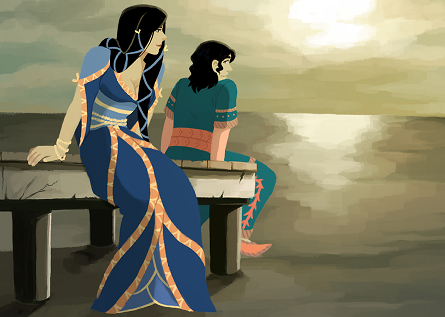 For the first couple of weeks of our fast five interviews, we’ve chatted with a number of Aussie game developers. This week, we’ve got an interview with a New Zealand developer, because we wanted to support their local industry too – we share a lot in common, our two countries, and our game development scenes are similar.

So this week we have a chat with Maddi Baird, who recently released the really excellent Inverness Nights (you can read Harvard’s review of the game here). Anyone who’s willing to go out there and really promote games as a storytelling medium gets our support, and we’re greatly looking forward to seeing what Maddi can do with the medium next.

Matt S: What are you working on at the moment, and how’s it going?
Maddi B: A mix of post-release support for Inverness Nights, a short experimental Twine game called Captain Dracula, and my next visual novel.

On the Inverness Nights front, I’m wanting to get the game on Steam, which means a lot of small not-so-interesting tasks like fixing UI issues, planning out achievements, and figuring out just how Steam Direct works. All necessary work (especially the ‘figure out Steam’ part!) but it’d be pretty dry on its own, which is why I’m juggling it with additional projects.

Captain Dracula’s something I’d like done by the end of August; the premise is in the title. and it’s a fun break after three years working on a game about people being sad. You’re on a submarine, and you discover the captain is Dracula. What do you do? There are dozens of potential endings to your fateful encounter, from traditional vampire slaying action to summoning a giant squid for help — here’s hoping people have as good a time finding them as I’m having writing them.

The next VN isn’t something I’m prepared to give details on yet, except for the fact it’s a lesbian/yuri VN, and it’s a gothic comedy. Other odds and ends of setting detail might crop up on my Twitter, @kitsubasa, so if anyone’s interested in sneaking some more info, they should check in there!

Matt S: What do you think about the state of the New Zealand game development industry at the moment?
Maddi B: I think that New Zealand’s got a friendly, helpful scene which is – in all the areas I know – committed to making unique work we can stand behind. Like Australia, we’re largely indie-driven, and that makes it a lot easier to interact with people from different companies at different stages in their careers. There’s never been a time here where I’ve felt like I’m not supposed to talk to someone because of a perceived status difference, even when interacting with people who’ve had massive success. It’s a cool community and I’m glad it’s such an amicable place.

My only gripes with the industry here are more about gaps in what’s on offer rather than anything wrong with what we’ve got. A lot of our events and event spaces are oriented toward family-friendly arcade games, and I’d love for extra opportunities for developers like me who’re making more adult-aimed or meditative games to showcase their work. I’d also love to see a broader range of financial support available for developers, to compliment the Interactive Development Fund and the Kiwi Game Starter Fund. Our industry is doing well, but I think we could do even better if more people had more ways to get their games funded!

Matt S: What recent game would you recommend to people at the moment, and why?
Maddi B: Until three weeks ago I honestly couldn’t have suggested any games from 2017, because I’d stopped playing them due to a lack of time/money while I finished Inverness Nights. Luckily, the only recent release I’ve played since then turned out to be really good, so I do have something to recommend!

I’m extremely late to the party, but I picked up Shovel Knight, and while the whole game was brilliant, the March ’17 DLC Specter of Torment was my favourite bit. Each playable character in Shovel Knight has a simple move set which is repurposed in imaginative ways for the various levels of the game, and Specter Knight’s fast, fluid movement appealed to me the most of the three. The music is full of fun Baroque-influenced variants on the original soundtrack (‘The Lonely Parapet’ flashback track and ‘Hidden By Night’ from the Lich Yard are especially good), there are lots of neat touches in the stage and hub design, and the story made me feel the strongest I’ve felt for retro pixels since Undertale.

If you haven’t played Shovel Knight or if you’ve missed the Specter Knight DLC, absolutely check them out!

Matt S: What’s something you love about the general games industry at the moment, and what’s something you wish would change?
Maddi B: I love the accessibility of digital games distribution right now! Between itch.io’s status as a great place for indies, Steam Direct making it easier for developers to access the biggest storefront in the industry, and other services like Humble and GOG, I’m glad that we’re in a place where small and solo developers from around the world can get their work out there without much hassle. There are some who see the current landscape as a nightmare scenario for discoverability, but I think that a game’s success shouldn’t depend on ten other games being unavailable in an accessible space – just because curation and other systems like genre tagging aren’t up to scratch doesn’t mean open storefronts are bad.

But oh my gosh can we please expand traditional genre tags so that story-based games – visual novels, walking simulators, and harder to classify varieties – and other less ‘traditional’ work is easier to find and, in turn, able to find its audience. I’d love a world with a few more standardised genres so that I don’t have to check a dozen different terms in case they have what I’m looking for on a given night.

Matt S: Hatsune Miku, yes/no?
Maddi B: Sure! Though, I gotta admit, Luka and Meiko have had a bigger impact on my work. Just Be Friends and a less popular song called The Thought to Tell were both on my Inverness Nights work playlist, and the video for The Thought to Tell was the inspiration for a major plot twist. Thanks, Vocaloid!

Retro reflections: On the most brutal platformer I’ve ever played

Uncharted: The Lost Legacy is going to be everything that fans could possibly want