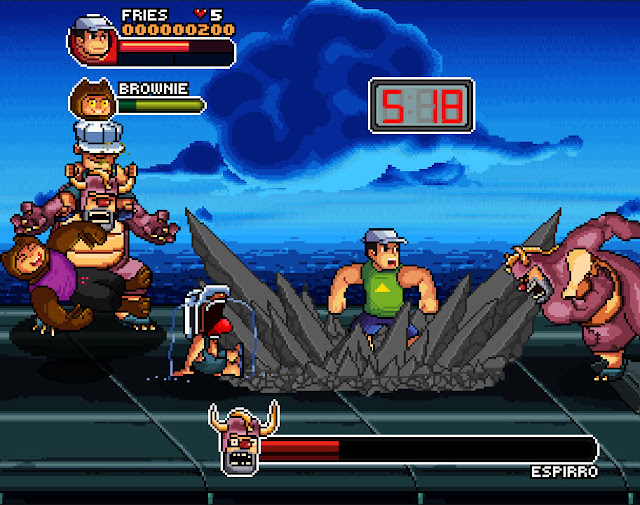 As an attempt to capture what makes the old school beat-’em-up genre, 99Vidas is a pretty solid attempt. It ticks all of the expected boxes along the way, it attempts to mash up a few existing titles into something that is not really new, but a title that fans of the genre should enjoy for the most part.

Right off of the bat, 99Vidas tries to pull off a very Streets of Rage approach to its storytelling and how the game itself generally plays. You fire things up with some pretty upbeat music, a lot of black backgrounds punctuated by colourful lower resolution visuals that explain a rather so-so story about how a crime overlord has acquired a powerful artefact that must now be saved by one of its guardians, each of whom represents an elemental power.

The characters are King (water), Izzy (lightning), Fries (Earth) and Oak! (fire). There are some nominal differences between strength and speed, just like the old Streets of Rage titles, but the characters tend to play in very similar fashion. They have basic punch/kick/jump that you can string together into combos. There is also a single button special ‘magic’ attack that corresponds with each character’s element. For example King brings out a watery looking creature for a moment that vaguely reminds me of Shiva from Final Fantasy titles, who then pummels the screen with a tidal wave that is enough to kill most common enemies while giving bosses a bit of a ding. Otherwise you are looking at stringing together series of punch and kick combos while playing out the time tested method of moving up and down on the screen to try and take advantage of horizontal alignments. That way you can avoid attacks while hopefully walking the bad guys into yours. 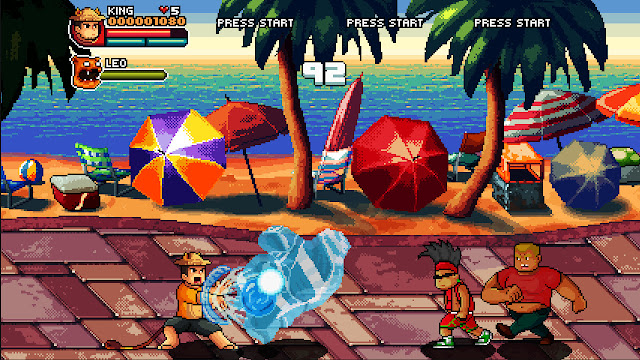 The lead characters really are not all that interesting, though some of the enemies are pretty cool – especially the bosses. You have your usual assortment of street thugs and martial artists, but you also have girls whacking you with what I think is a stuffed rabbit, and the first stage boss is the owner of a video game store. He goes into “8-bit mode” – complete with glitches – when he fights you. In fact, several of the boss fights deserve credit for having a bit more strategy to them than their classic counterparts. Brawlers like these became popular in the arcade during the Double Dragon days, so generally bosses were just like you except with harder hitting and more life. They were designed to suck down your quarters.

Here most of the bosses have a bit of a pattern to them, not unlike classic shooters. Early on the pattern might take a bit of getting used to, but once you figure it out, you can start to exploit them. About halfway through the boss battle random enemies will get thrown into the mix to try and mess you up. Some of the boss battles are more interesting than others, but kudos to the devs for doing something unique with most of them.

While there is definitely a Streets of Rage vibe here, the actual gameplay graphics and the ability to purchase upgrades has a bit more of a Scott Pilgrim vibe. 99Vidas is not an easy game by any means, so these upgrades do come in useful. You might upgrade King’s punch combo to include some additional damage at the end, so after the fourth punch he then blasts his opponents with a column of water that then freezes them as they fall backwards from an uppercut. It certainly does make fights easier, but the enemies can come at you from all sides (though there is a handy escape move that hits both sides at once at the cost of some life), and the stages run perhaps just a bit longer than they should. The first stage seemed a bit too long, the second had some nice pacing, but the fourth seemed like The Never Ending Story. These longer levels with your limited life supply as enemies start to deal much larger sums of damage serve to make the game a lot harder later on. 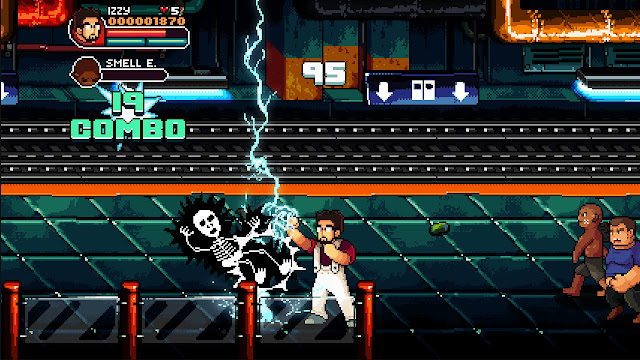 Thankfully your progress from purchased upgrades remain, and there is a level select option that allows you to zip right back to the last stage you died on. While I think 99Vidas could use more stages of greater variety with shorter lengths, the game itself really is not a terribly long one. You can beat it in a handful of hours. There are plenty of unlockable characters however (each one with their own progression options, though again – they all tend to be similar), which does add some replay value to the title. 99Vidas is, like most brawlers of this nature, at its best when playing co-op with a friend as well.

99Vidas is a perfectly competent brawler game that does nothing to reinvent the genre, but is a solid enough example of it. Short without a lot of variety, I wish the story and main characters were more interesting, but at least the visual style suits it and the music is fantastic. Seriously, the introduction reminded me of the old Capcom Mega Man games with its upbeat tune, and the soundtrack’s staying power throughout the game was perhaps my favourite aspect. I just wish there was more move and purchase options as well as additional variety in the characters. Stages are well enough designed, but probably run too long and could have been broken up into smaller chunks while providing greater variety in the environments as well. It is generally mindless, repetitive fun that could have benefited from the same creativity that went into the boss design being put into the actual characters or story.