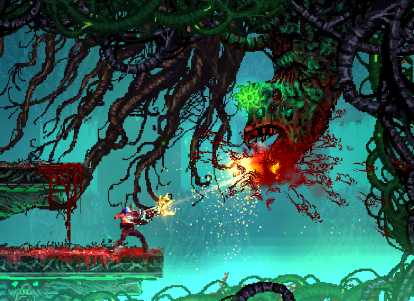 Slain: Back From Hell was one of those indie games that didn’t look like much until you sat down to play it, and then discovered that, actually, it was really bloody good fun. Mixing a love of Castlevania with a love for head bangin’ heavy metal, Slain is one of those slow burner games that we think people will continue to discover – and love – in the years ahead.

Related reading: Brad’s review of Slain: Back From Hell.

The development team behind that game, Steel Mantis, have obviously decided that they’re on to a good thing, and have announced at E3 that the next game from the team will be much the same thing, only this time set in space. Valfaris is a hard-hitting, heavy-metal, grim science fiction vision that promises plenty of pixelated, visceral goodness when it lands in 2018. Details from the press release below:


After mysteriously vanishing from galactic charts, the fortress of Valfaris has suddenly reappeared in the orbit of a dying sun. Once a self-contained paradise, the grandiose citadel now plays host to an ever-growing darkness. Therion, a fearless and proud son of Valfaris, returns to his home to uncover the truth of its doomed fate and to challenge the arcane evil at its very heart.

Skulls in space! Gore in space! Metal in space!
Savagely reduce foes to piles of gibs with an array of brutal weaponry
Explore a diverse range of tainted environments as you venture ever deeper into the dark world of Valfaris
Dominate ranks of deadly enemies and bosses, from the weird to the grotesque (and some that are just grotesquely weird)
Gorge your eyes on devastatingly awesome pixel art hand-crafted by Andrew Gilmour
Feel the power of a seismic soundtrack by extreme metaller and former Celtic Frost guitarist, Curt Victor Bryant
Forged from the ground-up by the team behind cult hit Slain: Back From Hell

So, what do you think? With a bit of refinement, Slain could have been an all-time indie classic. Perhaps Valfaris is that refinement in action.

E3 2017: Nintendo, where the hell is Lyn in Fire Emblem Warriors?