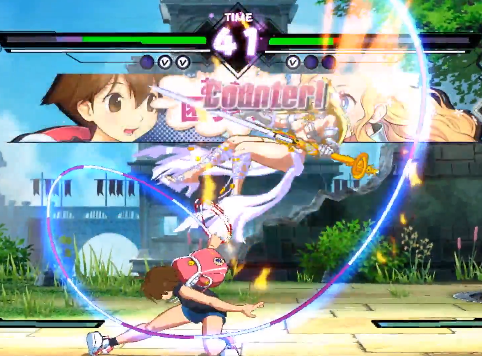 What springs to mind when you hear there’s a new cross over fighting game in development? Surely your mind sifts through images of Super Smash Bros. and the Capcom VS [insert company here] titles of the world. Perhaps you’re more in tune with the anime universe, keeping up with games like Jump Super Stars and Dengeki Bunko: Fighting Climax. I think it’s safe to say, though, that no one quite expected the roster of Blade Strangers.

Developed by Studio Saizensen, what we’re dealing with here might well be the coolest mashup since DreamMix TV World Fighters. That game let Licca-chan beat up Optimus Prime, TwinBee, and Bomberman. Okay, maybe it’s not that over the top. The folks in Blade Stranger are a little more…niche than the aforementioned franchises, but it’s not impossible you’ve heard of them either. Especially one gal in particular.

The full roster has yet to be revealed, but this sampling was enough to whet my appetite:

So yes, you’ve got the busty star of a hack and slash squaring off against a fisherwoman from a puzzle-platformer and a robo lady from one of the most beloved indie games ever. That sense of personality translates into the action itself with bizarre attacks that pay tribute to each character.

Besides the novelty of the roster, the game is aiming to achieve an delicate balance. The idea is to combine the complex dynamics of Guilty Gear or BlazBlue with the simple button inputs of titles like Super Smash Bros. You’ll still have a fast pace and footsies to facilitate depth over the long haul, but you won’t have to think so hard about which button does what.
Nicalis plans to release the game in English for quite a few platforms. We’re talking the Switch, PS4, and PC (as well as in some Japanese arcades). With that comes the promise of online play, of course. There are already utterances of patches and additional characters, so it’s safe to assume it’ll be getting some solid support post-launch.
Throw in a speed metal soundtrack and a story mode with silly character interactions and Blade Strangers is the most promising 2D fighter we’ve seen in a while.