Blue Reflection doesn’t even have an English release date yet (and, frankly, given its content I’d be surprised if it does make its way out this way), but that doesn’t stop me looking at the DLC costume just revealed and having a bit of a nose bleed. 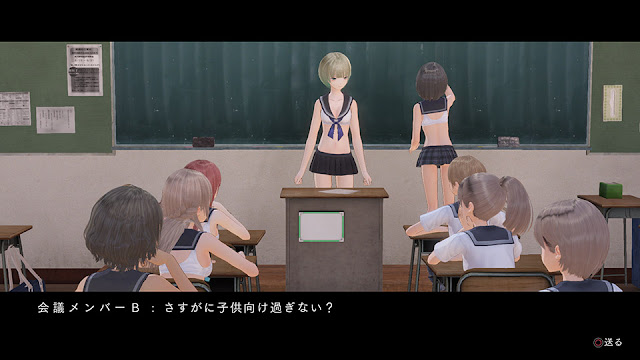 The very, very beautiful girls of Blue Reflection are getting new series of sailor girl swimsuits as DLC; for each and every girl in the game, it seems. The swimsuit involves a sailor bra, and then a super short skirt, with black swimmer bottoms underneath.

This game is easily shaping up to be Gust’s most fanservicey game ever, and that’s why I have increasing doubts that there will be a localisation; though there is an English trophy set, and Koei Tecmo seem to be exploring the idea of bringing it out west, the basic reality is that 1) this would be a very controversial game, particularly if the swimsuit DLC is also localised, and 2) it’ll be a candidate for banning in countries like Australia and New Zealand. Sadface. Still, at least we have such delightful screens such as the below one. I had this dream once (okay more than once. Okay, a lot).

This is the announcement Darksiders fans have been waiting and hoping for: THQ Nordic will bring us the new, third game that is in development by Gunfire Games. Many members of the old series developer Vigil Games are on board — good to know there is continuity! Darksiders III has a planned release sometime in 2018 for PlayStation 4, Xbox One, and PC. IGN is providing the reveal trailer:

Rather than take on the role of one of the Four Horsemen of the Apocalypse, you will play as Fury, a sister (from what I gather) of the Horsemen; she’s described as “unpredictable and enigmatic,” which are definitely promising traits in any apocalyptic game. As a mage, Fury relies on her whip and magic to restore the balance between good and evil. The game is set around the same time as Darksiders 2 and Fury’s quest is to destroy physical versions of the Seven Deadly Sins.

Every game needs a succinct categorisation, and Darksiders III doesn’t disappoint: it’s a post-apocalyptic open-world action adventure with (the series’ hallmark) a focus on environmental puzzles and exploration. Combat will continue in the hack and slash vein. The Charred Council has tasked Fury with the quest to restore humanity. She will have to traverse a host of different environments, from the heights of heaven to the depths of hell, in what is promised to be an open-ended, free-form planet Earth, ravaged by war and decay and reclaimed by nature. That’s one heck of a task, and we look forward to unleashing Fury.

When I first saw the news a while ago that Bandai Namco’s God Eater team is working on a new action RPG with vampiric elements, I actually felt rather blasé about it. Ah well, I thought, so likely another monster hunter but with vampires — nothing terribly new here. Except we have Dontnod’s extraordinary-looking Vampyr to consider. Can the mighty BN come up with something novel, fresh, captivating, for our jaded appetites?

I’m beginning to think I can quietly tuck away the blasé attitude, as I replay the very first debut trailer. We see what are clearly an intro cut scene, but we also get a glimpse of gameplay and battle. To say it looks dark, menacing and gore-y would be an understatement. The story premise is appropriate for this darkness: a mysterious disaster called the Thorns of Judgment has laid waste to the world and humanity. So far, so familiar, as end-of-world scenarios go. But it gets worse (oh goody!) … Some have survived, in a stronghold called Vein. They are Revenants (a type of vampire) and they are gifted with special powers. But as we all know, special power always comes at a special price — and here the price is two-fold; their memories and a raging thirst for blood. If they descend into full bloodlust they may become one of the Lost. We see those in the trailer — ghoulish, ghastly creatures without a human trace left.

What is striking about the aesthetic of Code Vein, apart from the fact that it looks bloody (!) impressive, is the vibe it gives off: there’s some Dark Souls in there, and also a smidgen of NieR: Automata. Due to the anime style, some commentators are already dubbing it the ‘Anime Souls’ game. Code Vein was referred to as a “hard action RPG” in the Famitsu reveal, we would expect combat to be very much its own, probably based on the groundwork and expertise built up through the God Eater games. Bandai Namco Entertainment America VP of Marketing, Eric Hartness, promises “plenty of challenge” and a “smart and engaging story.” Development on Code Vein is currently 35 percent complete and a 2018 release is projected, with platforms yet to be announced; there is no doubt however that it will come to major home consoles.

It’s the most wonderful time of the NieR

Okay, so I might have Christmas carols on the mind, as evidenced by the headline I just gave this news piece. But you know what else is on my mind? NieR. All day, every day, it is not an exaggeration to say I cannot get away from its wildly popular sequel, NieR: Automota. Those in the loop knew it would be something special, as are most brain-children of Yoko Taro. How lucky are we that something we love is being loved by so many?! And now there is more to love, courtesy of the long-titled 3C3C1D119440927 DLC that is now available. Now! For any of us that lack patience, now is the best availability.

So what goods are awaiting us in the 3C3C1D119440927 DLC? The succinct answer is three new colosseums to challenge and additional subquests. It is within these colosseums that rumours become reality, as players are able to fight Square Enix CEO Yosuke Matsuda and PlatinumGames CEO Kenichi Sato in epic boss battles.

There are new rewards to be earned, including costumes (featured from NieR: Replicant are “Revealing Outfit” for 2B, “Young Man’s Outfit” for 9S, and “Destroyer Outfit” for A2), records, new equipment, new cosmetic accessories, special bulltes that change the appearance of enemy bullets, and masks with unique “on equip” effects. There’s a hairspray that changes the colour of 2B and A2’s hair, which I find quite exciting despite its lack to truly add any depth to the game past a single customisation feature that Western players (in general) expect in games; I just believe every video game character should have hot pink hair if the opportunity presents itself.

Japanese history: On Ieyasu Tokugawa, the patient one