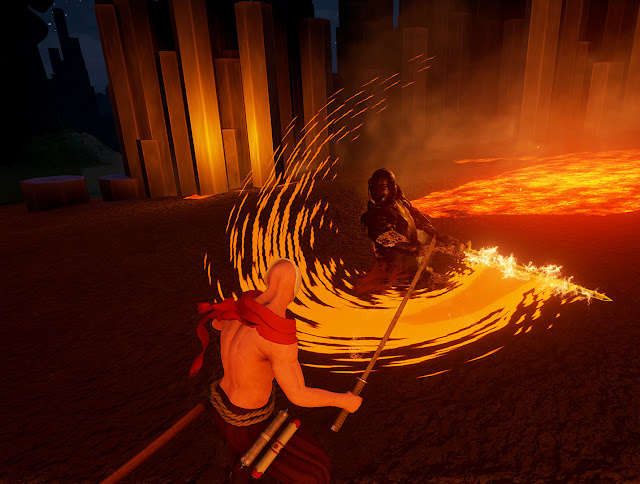 Blade & Bones is an ambitious title that draws clear inspiration from the Souls series while trying to instill some unique characteristics and story elements. The end result can be a little rough around the edges, with moments where the experience shines and others where it stumbles to make the most out of its ideas.

When I was first researching this title, I saw that it was self-described as a Metroidvania experience, and I am not sure I would completely agree with that assessment. There are elements of item acquisition, exploration and some limited platforming, but therein lies our first issue: there is something of an identity crises as Blade & Bones attempts to blend several genres together. I can appreciate the ambition, but it does so with mixed success, failing to really effectively compete with any of its sources of inspiration. Metroid does the Metroidvania experience better, in other words.

Things start off in an interesting, minimalist way as our masked character finds himself in a cage that swings open and allows him to walk through a dark ruinous location with a handful of strange signs along the way. This is the first step in teaching you how to communicate with the outside world, as instead of looking at someone and pressing a button to engage in conversation, you can adapt one of four types of expression: peaceful, aggressive, questioning and combative/duel-seeking. The idea is interesting, because it gives you some degree of control over interactions with other characters. For example, in one remote desert location, you discover a gun-wielding man whom if you simply greet in peaceful fashion does the same. If you question him three times, each time he will reveal a small snippet of dialogue pertaining to some of the over-arching story and then accompany you for a short ways. Additionally if you choose to duel or be aggressive with him, he will fight you – but then stop near the end and ask for your help. As a system of expression the concept is interesting, but often limiting at the same time. 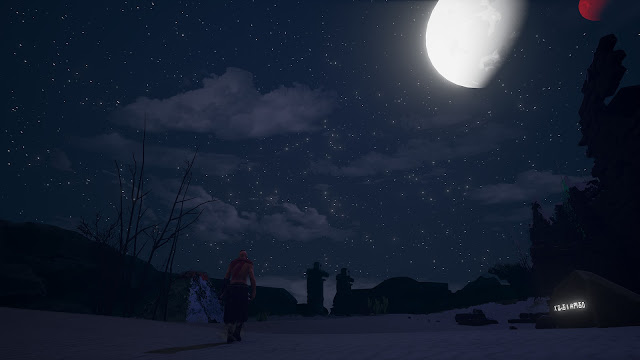 That is a shame, because Blade & Bones gets off to an interesting start with its narrative, placing a heavy burden upon your nameless character who among the last Orins alive. The Orins are a race of beings who were first created but then cursed and cast aside by their creator, Niro. These writings you encounter during the opening ruins sequence help to build up a sense of mythology and world that Blade & Bones fails to sustain throughout the rest of the game. This is due in part to the open world presentation. Bits of dialogue and discovered writings along random walls make up most of the narrative along the way, but because you can discover these segments in almost any order, the actual storytelling experience is disjointed, to the point of being utterly confusing. I can appreciate the mysterious approach used in other games like the Souls series, allowing the player to make some assumptions and try to fill in some of the narrative blanks, but the longer I played the less invested I became in the story itself. Moments of discovered lore help to create a sense of world, but are too fragmented to craft a cohesive tale.

The world building is aptly supported by a pleasant fantasy score and a striking visual style that deserves credit for excellent use of colour and imaginative design, but on a technical level looks like it could have been developed ten years ago. It does not help that there are a handful of small issues, from questionable hit detection to clipping as your character walks to simple oddities like accidentally passing right through the wall of a pyramid that leads to nothing and was almost impossible to get back out of. Generally bug-free, that particular occurrence was somewhat off-putting. However, exploration is really where Blade & Bones shines. The passage of day and night can be controlled by large clocks that can advance or reverse time, large structures peek out over trees in the horizon and invite you to explore them and the open world has some starkly different environments that are generally pleasing to the eye.

When the visual elements come together, they do so wonderfully. Not content to simply have you skulking around in shadowy darkness, there is a full day and night system that impacts not only the world’s visuals, but elements within the world as well. Some creatures respond very differently depending on the night time, while some of the environments are impacted as well. One specific example was the aforementioned pyramid that had me glitching through a solid wall earlier. During the day I discovered it and entered, and you could feel that there was something interesting to it, something just beyond your tangible senses. I happened by it during one of the nights and I could see a lovely violet light pouring out of the top of it and into the sky, like a supernatural beacon. I entered it and interacted with the stones within and my character’s stats shifted – giving me more life and less stamina as well as a handful of other minor changes. This was a particularly cool moment of discovery that is an example of when exploration was at its best. 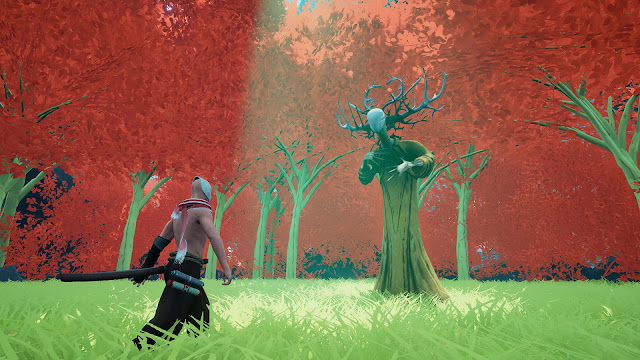 However, for a game that clearly draws inspiration from the Souls games, the combat is particularly lacking. One of the best parts of the Souls series is discovering new weapons, because different classes of weapons work in unique ways. They are about more than stats, and offer different styles of combat and some distinctive visual changes as well. Here our protagonist’s entire quest is built around finding seven legendary swords. Along the way, you find swords of differing rarity and basic stats. However, at the end of the day, you are using swords, more swords and even more swords. The combat works okay, despite those issues with hit detection I mentioned previously. This lack of precision makes the experience a somewhat sloppy one, and that issue is compounded by how shallow the combat mechanics are. You have a heavy swing, a light swing and if your weapon swing is timed perfectly with that of your opponent, you parry one another back. There are a handful of relics to be discovered as you play that serve as magic of sorts, from a single shot pistol that refills its action bar very slowly to a spell that sends white doves out in different directions to help lead you to where the legendary swords are located.

These shortcomings encouraged me to skip combat where I could, sprinting past enemies in search of my next sword. You have the potential for rewards of course (usually in the form of a new sword) if you best an opponent, but the combat is just so unresponsive that it just is not a lot of fun. This only gets worse as your enemies grow more powerful, because their techniques seldom change up in any truly meaningful way, but generally they just deal more damage while benefiting from some obscenely large pools of health that make the combat even more of a slog. Thankfully boss battles hold up better, and while these are perhaps not quite as imaginative as Souls bosses, they are better balanced than the completely avoidable minion matches. One interesting boss was a tall character found in a wooded area after some clumsy platforming on a broken bridge. The colourful forest surrounded me, the boss’ lengthy red bar of life showed up at the bottom of the screen and… he did not immediately come after me. I was able to lock onto him, I was able to walk up to him, but it felt more like he was sizing me up than anything. So on a whim, I decided to try and peaceful communication method, and he then vanished, leaving me his legendary blade and re-opening the woods to me once more. Again, an interesting moment that stood out amidst an otherwise so-so experience just beforehand.

There are some interesting ideas simmering beneath the surface here that attempt to give Blade & Bones its own identity. You can discover different combat styles that essentially serve as modifications to your core combat stats such as speed and damage. Also, instead of typical experience these found weapons, relics and styles all serve as your progression. However, the lack of an experience system means that the primary penalty from the Souls titles – the possible loss of your precious souls/experience points that are left where you die – is off of the table. The system that replaces it is interesting, in that your character essentially starts with several lives or purities. If you die, a purity is placed at random in the world to be discovered. If you find it, you get that ‘life’ back. Run out of lives, and your save is essentially deleted. I never really felt as though I was in any real danger of this happening, as I don’t believe I ever had less than three or four purities at a time, despite the clunky combat. 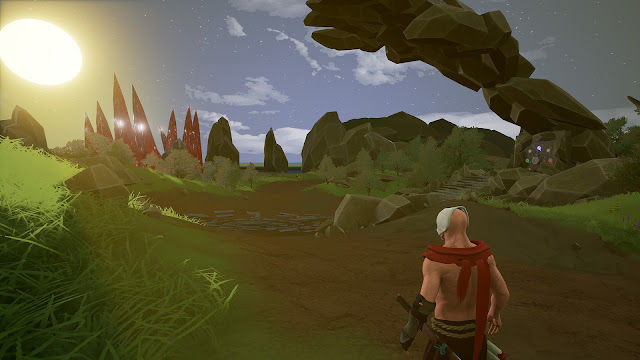 Blade & Bones pulls from several interesting sources, but because it never really nails down any one style of play. It teases combat that never really delivers except in boss battles, there is the hint of a bigger, mysterious world that never quite becomes fully realised and there are some systems meant to add variety, but only do so at a largely superficial level. However, Blade & Bones benefits from a fantastic visual design that really encourages exploration with profoundly satisfying moments of discovery that elevate the experience in memorable ways. There moments really raise my overall impression of the game, because despite some flaws, any game that creates memorable moments in a positive fashion should be commended. The end result is a mixed offering, but one that could serve as a fantastic foundation for Coffee Addict Studio to build on in future games.

Retro reflections: I have an arcade cocktail cabinet and my life is complete!