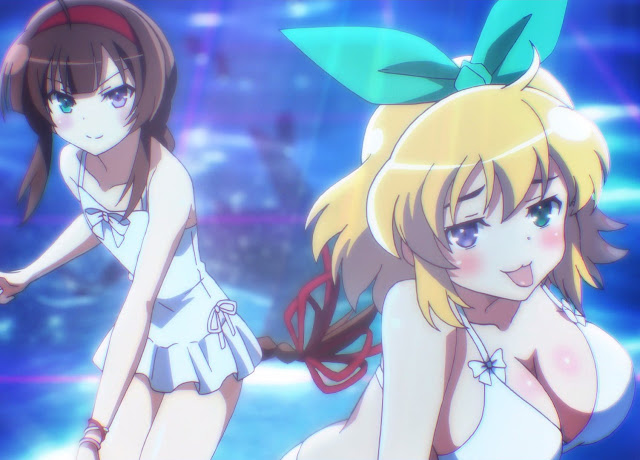 I thought about putting a disclaimer in front of this review but it’d honestly have been redundant. The gist of it as as follows: for the uninitiated to the franchise, this is a game about boobs. If you hate boobs, maybe read something more intellectually stimulating like Matt S’ nuanced and glowing review of NieR Automata. Or don’t. You can be an Intellectual™ and still have an eye for aesthetics.

Related reading: For a review of the game’s original PlayStation 4 release, check out Matt’s piece from earlier last year.

Before we get too carried away, though, let’s just agree that there’s no point couching it in metaphors – this game is an ode to boobs, and a work of art in itself. If Beethoven had been an iteration of our modern times, he may very well have written Symphony No. 9 In D Minor, Op. 125 about the fleshy heaven that is Senran Kagura: Estival Versus. Kenichiro Takaki has mastered the delivery of the Breast Buffet (something that a lot of games aspire to but cannot perfect), and even though this game suffers from some of the regular issues that plague PC ports, it’s very hard to fault the stylish delivery and mechanical presentation overall.

Before you get all up in arms about how the game is probably 100 per cent fanservice and no plot, let me be the first to reassure that it isn’t the case. There’s definitely a plot in Estival Versus, though it may feel more like the spiritual successor than a direct narrative successor to Senran Kagura: Shinovi Versus. I say this because the plot isn’t a central concern in any way; it’s a show-and-tell that doesn’t invite interaction. Having no background knowledge of the series definitely isn’t a barrier to enjoyment here. The story might feel like window dressing for the most part if you’re looking for deep, philosophical questions to ponder, but then I’d have to question exactly why you picked up a copy of this game and expected it to go all Nietzsche on you. There’s definitely something there, though, and in a roundabout way, I respect the fact that the game has made the plot feel more like an optional guideline than an obligation. I mean, the game is interactive gratuitous nudity and it doesn’t feel like it has to hide behind a horrifically contrived plot, or make excuses for the portrayal of incredibly shiny boobs. Takaki gives it to us straight, and I like that. The less time you spend faffing around on justifying why a game has nudity, the more time you can spend on making sure that it’s mechanically enjoyable, and boy, have Marvelous Games made Estival Versus enjoyable. 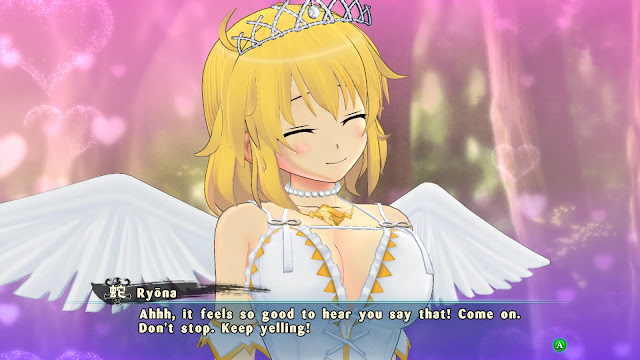 Maybe you fancy yourself a Musou fan. Maybe you loved Dead or Alive Xtreme Beach Volleyball. If both of those statements apply to you then you’re going to really enjoy this game, because it sits itself very perkily at the intersection between the two. Mechanically, it’s classic Musou – you hack n’ slash your way through a million enemies using either strong or weak attacks, and you get to execute ridiculous, over the top combos. It’s less traditional in the sense that the faceless hordes you’re fighting against are wearing skin-tight outfits that fray during combat, but it’s definitely on brand for Senran Kagura. Add in the physics-defying magical girl transformation of the girls entering their Shinobi forms, and the ability to have your playable character run around in lingerie masquerading as swimwear? Anyone could tell you that Marvelous has hit the jackpot here on something that has immense appeal across the swathe of fans that enjoy both the above mentioned games. I don’t use the Musou comparison lightly either. Estival Versus purports to play like the best of them, with its combo chaining and the high mobility afforded to the characters, allowing you to nip around battlefields and to position yourself to optimise the potential for humongous combos. However, I definitely had a problem with the default keyboard and mouse controls.

I could probably have played the game with a controller despite it being a PC port; that’s really the logical option for most games that end up on Steam this way. However, I decided to create the most authentic experience possible for this review and stuck it out with the keyboard and mouse for my entire playthrough. The summary? It sucked. Navigating the menus was annoying, mainly because everything was console-mapped until you got past the first main menu. After some messing around, I managed to get to an arrangement that worked for me – WASD movement, peripheral keys to attack, and frantically mashing camera buttons every couple of enemies or so in order to reposition. In general, playing this game purely the way I did was an experience that was much less precise than what I imagine the PS4 version had to offer. Not being able to smoothly deal with the camera controls meant that while brute force attacks were often the easiest way to clear throngs of foes early on, it was harder to position yourself and to make accurately calculated combos once the herd had thinned significantly. Dashing became much more integral to positioning; it was much easier to simply throw myself in a particular direction instead of turning the camera around and making sure that no enemies were in the vicinity first. PC ports are often played with controllers because of navigational issues like these and you’d probably only subject yourself to the keyboard controls if you were out of your mind, but for the sake of it being a port for the platform, I have to note the inaccessibility of the default controls and my final assessment is that they fall just short of acceptable.

Technical issues aside, the charm is in the characters. There’s a lot to unpack when it comes to the game’s host of girls, least of all the sheer variety of the options that you’re given. The girls in Senran Kagura all come from competing shinobi schools, and as such, each girl has a different set of moves. They’re also thematically linked to their various schools and introduced through entertaining, but sometimes cringe-worthy, cutscenes. What I consider quite impressive is the fact that their individual identities are solidified both by the narrative and by how they handle mechanically. Some of the babes use guns to deal out tons of damage, and others use tessens or more traditional Japanese weaponry. They’ve all got their own quirks and tics: one girl enjoys groping her fellow shinobi, another gets off on humiliation, and there’s even a girl obsessed with meat (bringing to mind megababe Ikumi from Shokugeki no Soma). While some of the girls are clearly fanservice tropes condensed into a bouncy package, no two are alike, and you’re bound to find a 2D waifu here that suits your taste. Estival Versus is an incredibly eye-catching game, not only in terms of the effects and the girls but also the crystal clear graphics of the port. Every moment is rendered in great detail, and the game takes clear advantage of that to deliver defeat animations tailored to each girl that range from the nonsensical to the provocative. There’s a lot to love about the different characters, and you’re given ample opportunity to appreciate their assets, particularly in their individual shinobi transformations. 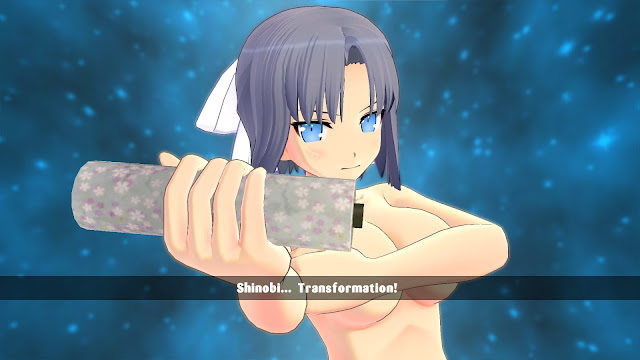 Ah, the transformations. Out of all the near-nudity and the panty shots in the game, perhaps the most picture-perfect view you’ll get of Senran Kagura’s famous boobs is during the shinobi transformations. These transformations are based off what each girl thinks is her ideal form (which explains why fan favourite Ryobi becomes more well-endowed after her magical girl moment), and while they don’t change much mechanically, they do allow for you to unleash stronger attacks and change the visuals on ensuing combos. Note: the shinobi transformation may, in some cases, give the girls more clothing instead of less. It’s not a total strip bonanza, and it does do its part to further differentiate the girls from one another. If it turns out that dressing up (or down) is your favourite part of games involving busty babes, then you’ll be relieved to learn that Estival Versus lets you customise every aspect of the girls’ outfits at your leisure. Blessedly, this includes their underwear. The game has kindly provided us with a dressing room mode, which comes with the ability to move the camera in any way you wish to capture some top-quality bounce (and some sneaky screenshots). It definitely felt like Christmas came a little early when I figured out that I could pose the girls once they’d gotten all dolled up.

Related reading: To go right back to the series origins, you’ll want to play Senran Kagura Burst on the Nintendo 3DS. Matt’s review.

Taking all the bells and whistles into account, Estival Versus is a title that you should buy only if you know exactly what you’re getting into. If you’re someone who thinks that the moral high ground to take with nudity in games is to draw the line at the anime boobs in swimsuits, then this isn’t the game for you. Issues with keyboard controls aside, it’s a sexy and smooth hybrid of slashing and dashing, and it’s best enjoyed when you cast aside any preconceptions about what the ecchi exterior might mean for the meat of the game. Yes, it’s incredibly provocative. Yes, it’s incredibly satisfying. Yes, it’s titillating, but in no way does it sacrifice the importance of mechanical mastery for shock value. Takaki has created a beast that caters to some pretty specific tastes, and the unapologetic delivery of the franchise’s latest offering should be admired regardless of whether or not your idea of a good time involves busty Japanese girls.