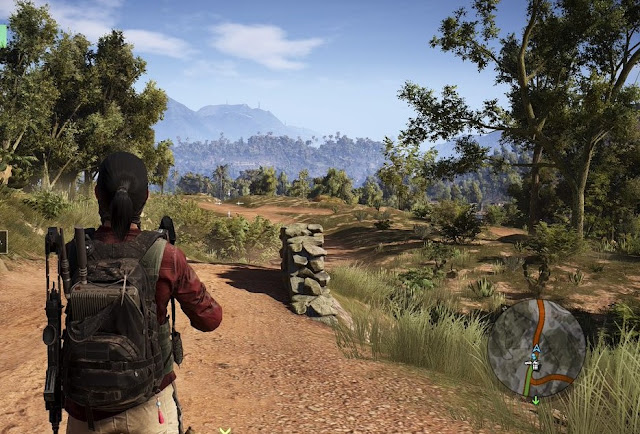 We live in a world where very serious questions are being asked of western interventionism and imperialism, colonialist attitudes, and the nationalism of western powers. With ISIS and Syria, we’re finally starting to realise that over a century of meddling, king making, and warring in places like the Middle East and South America has left many of those places in a state of endless humanitarian disaster. And in this context Ubisoft decided it was the right time to release a game that outright celebrates all of these things that we need to question about western – and particularly American – foreign policy. Wildlands is repugnant for the way it blindly celebrates the many evils wrought on the innocent in these places. It’s utterly unforgivable trash, and that’s tragic, because there is a decent – albeit derivative – game underneath all its posturing.

Bolivia has been effectively taken over by a drug cartel, and this has America concerned, because those drugs are finding their way into America and Canada. So America sends a CIA “researcher” to take in the lie of the land and figure out how to put a stop to it all. That CIA fellow is captured, tortured, and killed by the drug cartel. A bad move by the cartel because, as it turns out, this CIA fellow was a personal friend of some white woman up high up in the ranks that gets angry at his death. And so, she gets to call on a team of super-incredible American heroes to come blow up half of Bolivia in hunting down the (stereotype-on-a-stick) leader of the cartel.

It’s a completely trivial setup and the motivation for why you’re there is almost forgotten completely once the action starts and the Ghost team is on the ground. Which, generally speaking, seems to mirror actual foreign policy from America; once you’ve got the flimsiest of excuses to go in, in you go with impunity. To the squad in Wildlands, every Bolivian is either someone to be shot, exploited, or ignored. They’re a binary in which they’re a resource or a liability, and while there’s the softest of soft threats that you might fail a mission if you kill “too many civilians,” in practice collateral damage is not something you’re asked to concern yourself with.

Interested to know how stupid the enemy AI in Wildlands is? Here you go. #PS4share https://t.co/lVCyaUcpu9 pic.twitter.com/nvlLcvgZmf

For their part, the Bolivians are happy to play subservient in their own country. As American heroes, you are naturally the only ones that are able to achieve anything, so while the Bolivian militia offers you some help here and there, all the dangerous missions, where the real liberation happens, are left exclusively for you. The civilians don’t seem to care if you wander down main street decked out in every weapon known to man; they might cower a bit if you point one of your arsenal at them, but otherwise they just go about their business as though American “liberators” marching through town decked out for war are just expected. You can’t really interact with them, either; the closest the American heroes come to acknowledging the Bolivians and participating in their culture (aside from shooting them) is to denigrate them in conversations they have with one another, or listen to the cartel’s propaganda blaring over the radio. The sheer disdain that the game encourages you to have for these people is palpable, as it’s blatantly obvious that the reason you’re in the country is to further the interests of the homeland exclusively.

And all of this would be okay if there was the slightest hint of subversion in any of it, but there isn’t. This isn’t Spec Ops. This isn’t even like Ubisoft’s own attempts at subversion, be that various moments in Far Cry or in Valiant Hearts. This is a game that knows it’s propaganda for American interventionism, and actively celebrates that. We know this through Che Guevara. For the uninitiated, after bringing about that rather famous revolution in Cuba, Guevara would later try and replicate the success of it in Bolivia, where he was caught – and killed – by special forces with the assistance of – you guessed it – the CIA. To this day Guevara remains a highly controversial figure and I’m certainly not here to debate his merits, but in Wildlands the only mention I saw of him was where his face was stuck on a shooting target, and that of course is a completely juvenile thing to do that fails to acknowledge how the Bolivians really feel about Che on any level. But it does remind us of what we’re meant to feel about historical South American figures that didn’t get along well with America. No, Wildlands is not apolitical. It knows exactly what it’s doing, it is filled with propaganda to justify interventionism and nationalism, and that’s precisely why it’s so loathsome.

And as I said at the start, that’s a pity, because the game itself is good fun, when I can push all the narrative and context out of my head and just focus on the moment-to-moment mechanics of the game. The game wants to be a modern take on the classic action hit, Mercenaries, where players have a large open world to explore, and track down, a number of key targets within the cartel, slowly working their way to the #1 guy. In Mercenaries you’d need to juggle relationships with a number of different competing factions, with only one faction being permanently hostile towards you. The diplomacy in Wildlands is far simpler, and basically what you end up doing is following the icons on the world map and completing missions until finally you’ve got enough information to locate the compound in which one of the major villains are hiding. And then you kill them.

There’s plenty of different ways to approach most combat situations. If you’re a fan of big action, then the set pieces play out like every other shooter you’ve already played a hundred times before (and therefore you’ll probably like it). If you’re more into stealth, then you can show off the superiority of America by using drones to mark targets and set your team up to snipe them down from afar. In multiplayer this works better than in single player, as you’re meant to organise team tactics and otherwise tackle situations where you’ll be outgunned with careful planning. When playing solo you can send your AI team mates to take out targets and somehow they’ll never be spotted. There were times where I’d be watching through the lens of the drone as one of my allies snipes a faraway enemy while standing mere paces away from another enemy, who is, of course, completely oblivious to what’s going on. This doesn’t happen in multiplayer, obviously, which makes it the more immersive experience.

Between missions there’s not much to do, other than drive around a spectacularly boring Bolivia looking for more icons to kick missions off. Bolivia’s actually a beautiful country, and this game probably set tourism back for the country by a couple of decades. Driving mechanics are loose and things get even worse when you get into a chopper or plane. And, sure, the world is big, but because there’s not much to do to interact with it beyond shooting and destroying stuff, it’s not the kind of world that I felt particularly inclined to explore.

There are moments where I was stealthing around, scoping out a path through a heavily fortified compound to get to a target without bringing an entire militarised division on me that I did enjoy the kind of experience that Wildlands was chasing after. I absolutely loved Mercenaries and its “deck of cards” that I would have to hunt down bit by bit, and there were the briefest of moments where I got a touch of the appeal that had me hooked on Mercenaries for hour upon hour back in the day. But then I’m brought back to the reality that this is a particularly unpleasant piece of propaganda, and, frankly, I think the complaint that the Bolivian government registered over this game is perfectly justified.