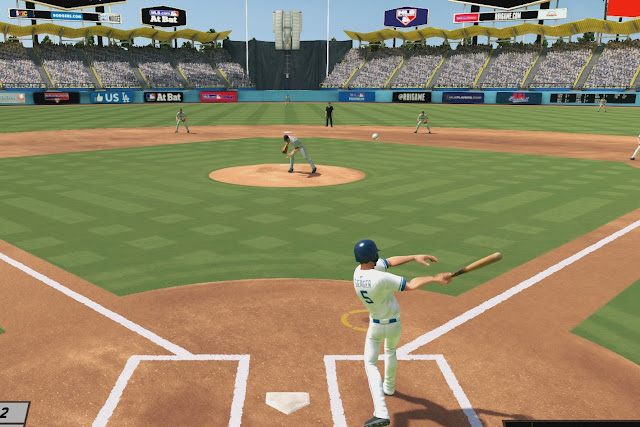 Out of all the sporting codes out there, there’s one – and only one, as far as I can tell – that feels like it can produce its own video games. The R.B.I. series of baseball games is developed and produced by the MLB itself. Take note, sporting codes: you should stick to what you know, and leave the game development to the actual professionals. The existence of R.B.I. Baseball is surreal, given that Sony publishes its own, fully licensed, MLB game in MLB The Show; a franchise of such exceedingly high quality that not even EA thinks it has a chance to compete with it.

Related reading: If you’re into baseball, then you’re surely going to appreciated the management simulation take on the sport in Out of the Park Baseball. Harvard’s full review.

What I’m saying here is that R.B.I. Baseball shouldn’t exist. It makes no sense that the MLB would compete with its own partner by releasing a game that will dilute the brand of baseball by being so aggressively poor. Because make no bones about it, R.B.I. Baseball 17 is an aggressively poor game. It’s bad enough for me to wish I wasn’t a fan of baseball so I wasn’t tempted to play something like this in the first place. I’ve reviewed some trash sports games over the years (including, tragically, the last couple of Handball games, which I so badly wanted to love), but R.B.I. Baseball somehow manages to pip those in doing the greatest amount of damage to a fan’s enthusiasm for the sport itself. It might be slightly more playable than “completely broken”, but there’s such a lazy cynicism that has gone into it that I found the entire experience completely unpalatable.

The basic idea of R.B.I. Baseball is to give players a fast-paced alternative to the ridiculously deep systems that power Sony’s MLB The Show. One the one level, that’s not such a bad goal; the game’s promise of allowing me to complete a baseball match in 20 minutes actually fits in nicely with how I would generally like to play the sport; if I wanted a long and in-depth experience I’d play a cricket game. The problem is that the execution of that idea is terrible on every level. In order to facilitate the quick play approach, everything that makes baseball an incredible sport has been stripped right down. Batting is reduced to a single button press (and a bunt, for that rare moment you’ll want to sacrifice the batter in order to progress one of the guys on a base). Pitching is also a single button, with a press of the analogue stick to give the ball some extra speed or swing.

You might be inclined to call the simplicity “elegant” to this point. But it doesn’t take that long for the simplicity to become draining. Because the only thing you have control of as a batter is timing, the ability to control where the ball goes is limited, and you don’t get to make the decision of whether you’re slogging for a home run or just trying to find some some empty field to roll the ball along the ground with. The camera angle makes it difficult to see if a pitch is going to be outside the box for a ball, and while that’s the case in actual baseball, too, swinging at a pitch thrown outside the box is an automatic strike. There were times where the pitch was only just outside the box, and visually I saw my bat connect with the ball, only for it to be considered a “miss” entirely. When the ball was swinging the other way I’d often see “balls” fly straight through my player; this game doesn’t allow players to be hit. You know you’ve got an awesome physics system working when balls and players exist on entirely different planes.

Pitching, meanwhile, works on a mechanical level, but the pitching game lacks room for any of the tactics that you see real-life pitchers play with. There’s no point in deliberately throwing four balls, for example, because the streamlining of the game means that, as far as I can tell from a few dozen games, there’s no difference in batting ability between any of the players. RBI Baseball is fully licensed (coming from the MLB, after all), but the avatars all seem to have the same ability to hit the ball, regardless of the real-world player whose face is’s textured (badly) over the avatar. Batting line ups don’t seem to matter thanks to this, and therefore only viable “strategy” is to try and strike each of them out. Similarly, there doesn’t seem to be a point in letting a pitcher get tired, when you can just call up another from the bullpen and he’ll play in exactly the same way, with the same abilities as his predecessor. Whatever statistical impact is implemented in this game is so subtle as to be pointless.

I know there’s an ongoing debate in sports games about how much of an influence statistics should have when set against a the player’s skill, but I tend to believe that statistics should have a substantial impact. It’s the statistics that make each character play differently, and force the player to adopt different strategies in order to account for the character’s strength and weaknesses. With RBI Baseball, I felt like there were more meaningful character statistics at play in the Mario Superstars take on baseball, and you never want a Mario sports game to be the one with greater mechanical depth than what you’re offering. Much less a Mario sports minigame. You may as well design a tennis game that has less depth than Pong.

… Why would a dev release this in the same week as Sony’s baseball game? #PS4sharehttps://t.co/Xk9ZwJYXN9 pic.twitter.com/9fAllo1l9B

For all these reasons, the actual competition modes in the game felt like a grind, almost instantly. I felt like I was playing the same teams over and over again, regardless of the uniforms that they were wearing, and because the game swings between being stupidly easy (on easy difficulty) to being downright unfair on hard, I never felt like there was much reason to play against the AI at all. As certain great philosophers would say, the results of most of these matches will be determined before you even get on to the field. With so few play modes to work through, even as a budget game, RBI Baseball fails to offer any substantial value for money. Even if you like it, you’ll play one, perhaps two games of it, and then put it down again. I would be very surprised if many people even manage to get through a whole season.

It’s hard to describe just how ugly R.B.I. Baseball is. Again, we’ve got an easy point of comparison here; just look at Sony’s impeccable stadiums, players, and general atmosphere. This one by contrast would look good, perhaps, on the PlayStation 2. Models are blocky and have an uncomfortably stiff animation, and wisely the camera is pulled back so far by default that you won’t be able to see how little variation there is between character models. The consequence to doing that is that there’s none of the exciting sense that you’re on the field of play itself that you get with a closer-in camera. There’s no crowd to speak off, and indeed there’s no ball game atmosphere whatsoever; there’s no commentary, and the canned cheering is quite dismal.

I don’t think I’ve ever played a more pointless game than R.B.I. Baseball 17. Yeah, sure, you can argue that it’s cheaper than the MLB The Show games, but surely if you’re enough of a fan of baseball to want to buy a video game take on the sport at all, you’d be willing to spend that extra money for a game that you will actually want to play, and a game that will actually do your favourite sport justice. I just don’t see how anyone, anywhere, could possibly want what this one is offering.