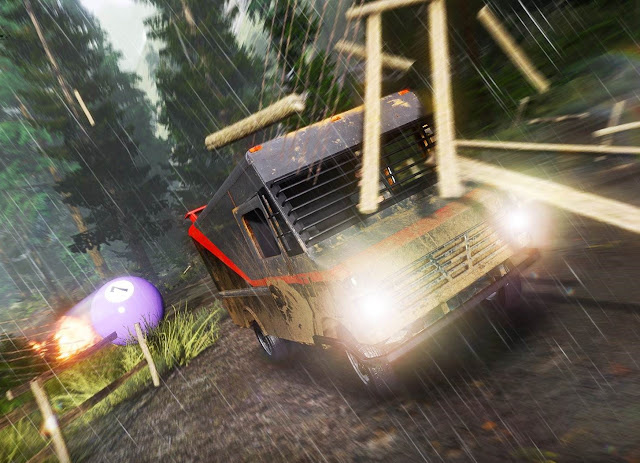 FlatOut 4 is a sequel to an absolutely terrible game. Sure the first two, in a series that stretches back as far as 2004, had been decent enough, but FlatOut 3 was that bad that it should have been a franchise ending event. Thankfully that was not the case, because while I went into FlatOut 4 with minimal expectations, I came away happily surprised.

The meat of the game is the career mode, which will not surprise anyone with what it offers, but it’s all well put together. You’ll only have a couple of different cars to choose between at first, but more will unlock as you play along… provided that you’ve got the cash for them. In career mode, you race in cups consisting of between three and five races, and sometimes one of the races will be an ‘assault mode’ race. These have weapons, and are decent fun at first, but too often luck was involved in winning these; luckily, then, that you don’t need to actually win the race to advance to the next one, and the AI is complex enough in the distribution of points across races that it’s possible to do poorly in a race or two but still come out on top overall.

Time trials is another standard mode, but the good news here is that the set times that the game asks you to beat are manageable. I’m not usually that good at time trials, but here I felt like I had a chance. The other mode worth mentioning is ‘survivor’, and this one is a bit different. Here you’re thrown into a Demolition Derby-type race where you must get points by crashing into other cars and by wrecking them. To make sure that those safe drivers don’t just cruise around looking for all the other cars to do the work on each other, racers are automatically eliminated if you they crash into another car in a set amount of time. 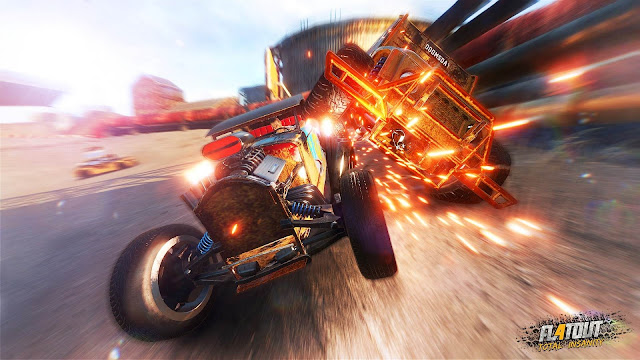 The AI in FlatOut 4 are dirrrrrty. They are never scared to crash you out just to pass you, and in this type of arcade racer, this is exactly what you want. Even better, they won’t be this way just to you; they will race like this with the other AI cars, giving you a chance to pass them while they have at one another. Both you and your opponents have health and if you run out you are out of the race, and that might sound like a lot of pressure, but the same can be done to them. You also gain nitro speed boosts by crashing into cars, making jumps, and smashing scenery. The destruction in this game never gets old; I love smashing into things like buildings and seeing them break into pieces while rewarding me for doing so. Like in past Flatout games if you hit something hard enough your driver will fly out of the windshield. Luckily this does not kill you and you will reset on the track, it’s just a spectacular novelty to watch.

Finally, there’s the more gimmicky FlatOut mode, where you compete in ‘Carnage’ races, ‘Beat the Bomb’ time trials, and ‘stunts’. Carnage races are about racking up points by crashing into cars and scenery. I honestly did not care for this mode as the small amount of points you would get for doing stuff made it really hard to win. Beat the Bomb tasks you with racing from checkpoint to checkpoint fast enough that a time countdown doesn’t reach zero blowing you up. Unlike normal time trials, you can use nitro boost in this mode and you gain it by jumps and smashing things. Stunt mode is a lot of fun. In it, you must fling your driver out of the car with the cross button and try and get him to do spectacular things in the air. Each stunt is a different; one had me flinging my driver into a block castle to earn points by knocking them down; it’s like Angry Birds, just twisted. Some of the other stunts involved flinging your driver into cups like a game of beer pong and trying to fling your driver as high as you can. This mode had a leaderboard so anyone who is into this type of online play will be happy.

There are also two kinds of multiplayer modes; online and party modes. Party mode is for 2-8 players offline, and features mini games like in the Stunts mode. This can be fun when you been drinking with some friends… indeed it seems custom designed around drinking games. Online multiplayer has more meat, with a couple of different options there. There are regular races, as well as assault mode and carnage. There are also combat arena modes in survivor, keep the flag, and deathmatch. Sadly, for all the effort that’s gone into the multiplayer, I haven’t been able to get games going. The community is pretty dead. 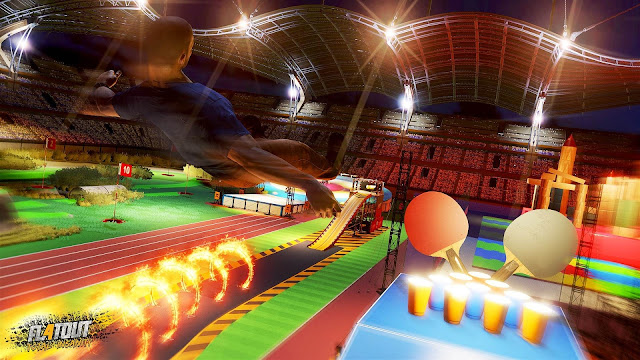 While the game runs well for the most part, some of the car physics are a bit odd. When I was using a car called Deep (the game does not have licensed cars) – which was pretty much a Jeep – whenever I hit a railroad track at high speed the car was sent flying. There were also times when I would hit small rocks and it sent the car flying. Yes, the game isn’t trying to be realistic, but these tiny annoyances ended up draining some of the fun from the experience nonetheless. The game can be difficult at times and if you want to win you will find yourself resetting a race over and over again. There is a decent number of tracks, and every track has shortcuts to find. The best way to find them, of course, is to follow the other racers, but sometimes they take the shorter route.

The game has a decent soundtrack with licensed music from bands I never heard of but I ended up liking a few of the songs a lot and even added them to my Spotify playlist. It has a decent mix rock music and I really enjoyed the soundtrack. The sound is just as good. Hearing the car roar to life as you press the gas and hearing it shift boost with nitro never got old. While most of the game is visually simple, the driver being flung out of the car uses ragdoll physics which can make those crashes just hilarious.

Aside from a few annoyances and occasionally unfair difficulty, I found myself always coming back for more with FlatOut 4, and one hour would often turn into three-hour play sessions. It was just plain fun to play, and sometimes a game doesn’t need to be more than that.