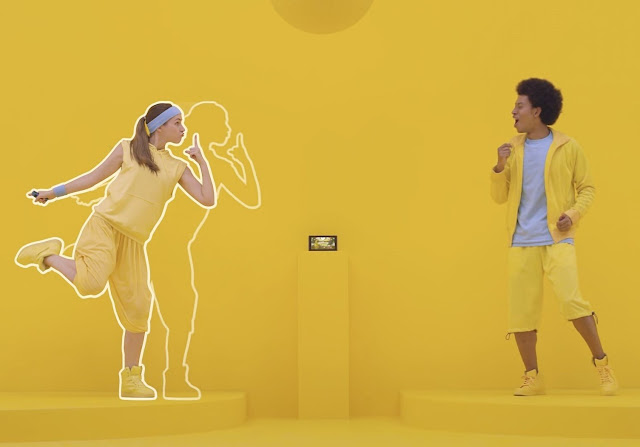 Before I start actually assessing the game based on its merits, I think perhaps it’s reasonable for me to sulk a little about what the game isn’t, and what I wanted the game to be. I wanted 1-2-Switch to be bundled with the console. I wanted it to be a single-player and a multiplayer experience, with player progression like Wii Sports and unlockables and achievements like Nintendo Land. I wanted it to be a game which I could show to my friends as proof that this hardware was worthwhile, but also a guilty pleasure I could enjoy by myself in my living room. 1-2-Switch is none of those things, and that’s perfectly okay. The following review will be based on what I think about what Nintendo have offered, and hopefully not on what I would’ve wanted it to be.

Related reading: Nintendo Land was to the Wii U what 1-2-Switch is to the Nintendo Switch. Our full review.

1-2-Switch is weird. It’s also a lot of fun. In fact, it might only be as fun as it is, precisely because of its weirdness. Nintendo EPD take a walk on the surreal side for this game, embracing the colourful, larger than life aesthetic of the Nintendo Directs and a mechanical simplicity reminiscent of Nintendo’s flagship “weird” series, WarioWare. Each game’s tutorial exemplifies the weirdness, with middle aged actors making exaggerated movements and looking like they’re having just a little too much fun.

The best way to illustrate this ethos of weird fun is by example: one of the simpler games is called Telephone. In it, both players lay down their Joy-Cons and wait; at the ring of a telephone, the first player to grab their controller like a phone receiver and yell “HELLO!” is the winner. The more cynical among us would ask why anyone would be titillated by such mundane mechanics, while 1-2-Switch’s target demographic is going to dive-pounce on that Joy-Con like a champion. Rather than separate the strong from the weak, 1-2-Switch is more likely to separate the shameless revellers from the stunned onlookers. 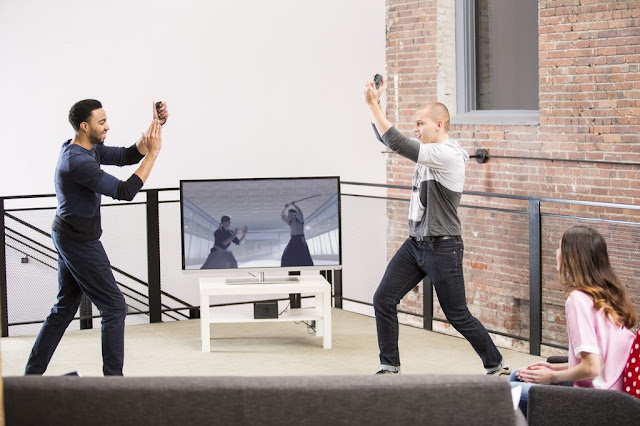 Over the course of the runtime you’ll squeeze the Joy-Cons like cow udders, brandish them like wizard’s wands and shake them like an unfortunately euphemistic soda bottle. There’s a gleeful stupidity in each minigame which you’d probably need to share to enjoy it to the fullest: if you’re going to be embarrassed at beating your chest like a gorilla, you might not want to play this. This is reflected by the majority of games asking players to look their opponent in the eyes as they play; at this point, the screen is just a distractor to the fun you’re supposed to have with your friends.

Most minigames are a great way to show off the innate capabilities of the Nintendo Switch. Ball Count is particularly mindblowing – it uses the HD rumble to simulate balls rolling around inside a hollow box, and the weight and bumps are accurate enough that players can guess how many balls are inside just from the tactile feedback. Another, Baby, asks you to cradle your Switch in your arms in order to pacify a virtual crying child on your screen. These are experiences you could only ever have on the Nintendo Switch, and experiences I’d never dreamed of having until now.

Other games aim to bring out the innate competitive drive between friends. Quick Draw and Samurai Training are fantastic at testing players’ reaction speeds against each other, while Runway and Air Guitar reward good rhythm. It’s hard not to get competitive once you’re looking into the eyes of your opponent: in these moments, the light Joy-Con in your hand becomes a sword, or a magician’s wand, or a loaded revolver; the instrument with which you will assert your dominance. You can, technically, circumvent the pretence of these games by simulating the required movements rather than actually doing them – the Switch can only work off the feedback you give to the controller – so you can dance with one arm or swing a baseball bat with a lazy wrist flick, but you’d have to be a vindictive hater of fun to stoop that low.

Each minigame lasts for rarely over a minute, and with 28 minigames available it’s more than possible to run through them all over the course of an afternoon. Most of their games lose their appeal after the initial surprise factor wears off – there’s no strategy or complex skill required in games like Milk (press two buttons and pull down) or Table Tennis (swing your Joy-Con in time with the ball’s bounces) or Eating Contest (open and close your mouth as fast as you can). The games don’t encourage you to practice and get better; instead you’ll play each once or twice and then move onto the next. I can only compare the offerings unfavourably to Nintendo’s own WarioWare or Mario Party, long running series which both pull off the irreverent microgame concept better than 1-2-Switch does. It’s not long before the novelty wears off you’ll find it hard to return to this game compared to everything else the Switch already has in its library.

But, in our world of instant, on-demand entertainment, could something like 1-2-Switch be the catalyst we need to have fun again? Would it be better to buy a game which will keep us occupied and comatose for 50+ hours, or one which will have us laughing riotously for five? Might this be a game we are unashamed to bring to parties, a game which unites families and friends alike in mutual public embarrassment, a game which actually feels like play for its entire runtime?

Over the course of the review I’ve hopefully weeded out the scoffers, the shy and the self-conscious, and hopefully made a good argument for why 1-2-Switch isn’t a launch title: it’s most definitely not for everybody. The misfortune here for Nintendo EAD is that party games need to be accessible and appealing to a mass audience, but 1-2-Switch settles for a very specific demographic and all but alienates the rest. For that reason, it’s not a purchase I would recommend; it would have been better as a “free” pack in so that people would get the chance to try it for themselves before deciding on whether it had any long-term longevity for them.

The Nintendo Switch is rushed and deeply flawed, but it’s also a sheer delight to play

Review: NieR: Automata; the greatest game ever made (Sony PlayStation 4)