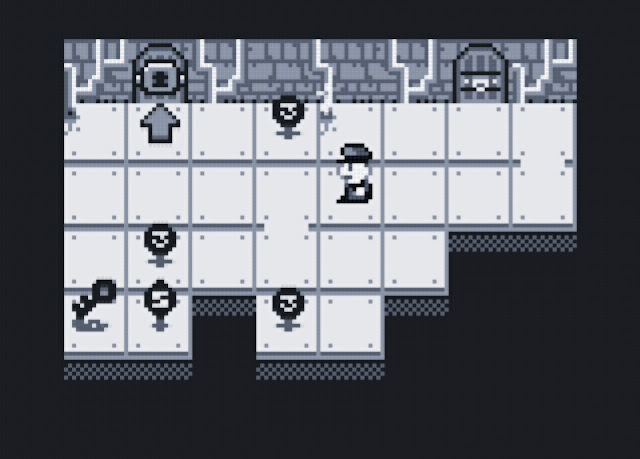 Ever since indie game development spread like wildfire, I feel it became worth distinguishing the two basic types of “modern” retro games out there. The first category covers those that don various coats (typically of the 8 or 16 bit variety) but feature mechanics far beyond the capacity of the systems they seek to emulate. The pixels of old might be leveraged for sake of nostalgia, an endearing art style, or budget limitations. There’s nothing wrong with this approach, mind you, but said titles ultimately rely on the technological advancements of the present as much as the past. The second and much less popular choice is to embrace the limitations of generations gone by. This authenticity is less blatantly rewarding in the long run as it inflicts various creative shackles with a less palpable return.
Warlock’s Tower falls into that second category, recreating the iconic visual aesthetics of Game Boy titles right down to the limited colour palette. With several tweaks, I’m confident this one’s core philosophies would translate perfectly to Nintendo’s first major handheld (a system even more primitive than the ones developers typically seek to replicate).
At the end of the day, this visual style is actually irrelevant compared to the lessons conveyed through the grounded game design beneath it. Limitation breeds innovation and by working within the rough parameters of decades-old hardware, developer Midipixel demonstrates a thorough grasp of what made the simplest games tick in the days of yore. 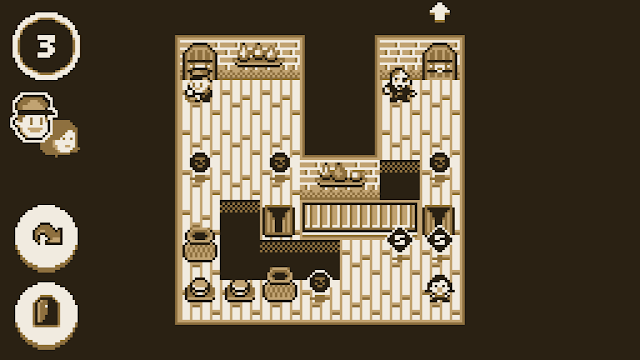 In terms of story, Warlock’s Tower is an affectionate parody of the often paper-thin tropes used to drive video games from the 80s and early 90s. The antagonist is a seemingly stereotypical cackling villain named The Evil Warlock. Feeling shunned by the populace, he lashes out with a plan for world domination. As it turns out, this warlock is actually adored by the locals so a friendly postman named Tim journeys through the man’s perilous lair to hand him a message of adoration and peace. Yes, the player pilots this unassuming little messenger through a treacherous tower swarming with monsters and death traps. Oh, and the tower’s curse means that every step he takes kills him. What fun.
It’s a cute subversion of expectations that uses its backdrop to facilitate gags ranging from puns to surprisingly sly cultural references. Such flavourful personality was often absent in Game Boy titles of their time, so it’s nice to see a joke-laden script more typical of the quirky modern games you’ll often find on indie-friendly platforms.
The gameplay of Warlock’s Tower sees poor postman Tim navigating various tower floors and solving puzzles on foot, generally involving the collection of keys and the manoeuvring of obstacles. It takes a page from the book of Chip’s Challenge and similar titles that use a character to interact with environmental puzzles. If that’s too esoteric an example, just imagine a 2D Zelda dungeon…only with all the complexity consolidated into a single room and a lot more face-eating zombies. Each map is rather diminutive, taking up little more than the equivalent of a couple Game Boy-sized screens. It’s precisely because the game’s scope is so limited that it works brilliantly, however. 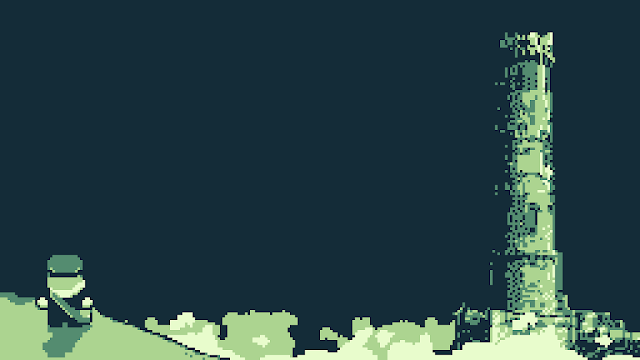 Warlock’s Tower hits its stride once all the pieces have been dynamically introduced. In the early going, each stage is undemanding enough to muscle through via process of elimination. There are only so many orbs to nab and tiles to step on, after all, so the consequence of trotting along can be reduced to two or three obvious outcomes. Once you’re switching between two playable characters that need to push pots at different times to activate switches that allow you to get across conveyor belts to grab a key while avoiding zombies, though, the number of available choices (the ways to fail) becomes stunning. The player begins to think not in terms of tiles and steps but broader, abstract conundrums that need to be solved on an individual basis.
Stripped of its core gameplay mechanic, though, Warlock’s Tower would not nearly as compelling. As mentioned, taking even a single step costs Tim his own life, so he must keep gathering various life-granting orbs scattered throughout the tower. As a result, it is more than possible for Tim to meet his maker by walking haphazardly, never to experience the joys of the undead gnawing on his countenance. Because players cannot run about willy-nilly, even the slightest movement has grave consequences.
As Tim progresses, the eponymous warlock will occasionally chime in to interrupt his quest with a bizarre slew of menacing threats and anticipation for the letter’s delivery. Like any good puzzle game of its kin, Warlock’s Tower is framed in such a way that the player is forever learning and adapting to new situations. Tutorials are conveyed through the warlock’s brief bits of dialogue so side-splitting they justify their presence as more than handholding. Even still, the game predominantly teaches incoming tricks through the gameplay itself. 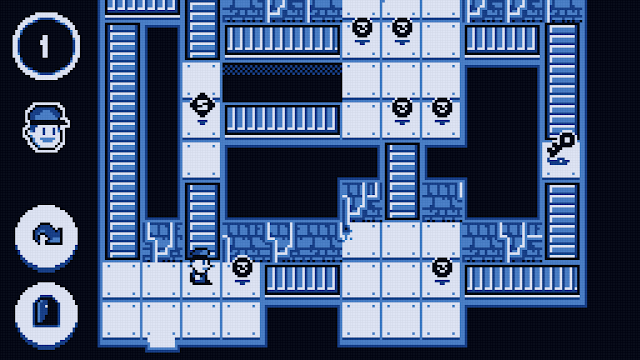 Crucially, it also evades the pitfalls of archaic, artificially difficult design that plagued the 80s and early 90s. Sans a handful of more gimmick-reliant stages that limit the player’s vision, every action and reaction is feasibly predictable by players willing to map their course out in advance. Even then, said gimmicky levels manage to be remarkably fair by always showing enough of the level to give the player a sense of direction and time to contemplate the situation. Many players will likely elect to launch headlong into danger anyway, but hey, that’s fun in its own right. Should players grow testy with that style of play, they can place a save point on any tile of their choosing to reduce wasted time. Believe it or not, that generosity won’t rob the game of its challenge in the slightest.
This makes the puzzle game’s fairness all the more impressive. So many subtle graphical effects work to convey unexplained mechanics in intuitive ways; before Tim activates a teleportation device, he can see which of several locations he will land and is not penalised for repeated experimentation. This sounds minor, yet this level of transparency was so often absent in the games of old. Even now, developers still omit small touches that convey functionality. I respect that Midipixel went out of its way to craft obscenely intricate levels that, provided the player doesn’t bash their head into the wall, can theoretically be completed on the first try.
It’s worth reiterating that the later levels only marginally increase in girth from those at the game’s inception. The potential for complexity was there from the beginning; the developers mercifully held back long enough to school players in the ways of multi-dimensional brain puzzles. This brings me back to the old adage about innovation through limitation. Warlock’s Tower uses every last one of its few tiles to full effect. In doing so, it achieves the integrity and depth of a great puzzle game with none of the fluff. 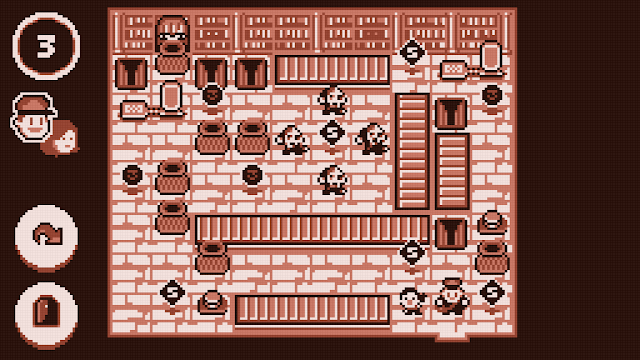 Warlock’s Tower is good for a nostalgia kick, but witnessing its small-scale systematic perfection firsthand is genuinely inspiring. As obvious a statement as this is, retro games were not retro at the time of their inception; they worked within existing technological parameters.  Because “game design” was once such a vague and amorphous concept, developers had to be bold and games were rougher around the edges than we like to admit. As any artistic medium develops, newer works are able to challenge and reassess the past and reach a state of ever-increasing intellectual maturity.
To put that another way, games like Pong understandably get no credit for their narrative depth, but they were still the foundation stones on which video games evolved. The old guard needn’t be forgotten and can continue to serve a purpose on the sidelines. In revisiting the past with the present’s wealth of knowledge, Warlock’s Tower effortlessly and unintentionally holds a game design seminar. Call me pretentious, but I’d like to believe open-minded children will boot this one up on their iPhones and, upon seeing the miracles performed by an indie developer with self-imposed handcuffs, perceive the medium in a new light.
Whether it released in 2017 or 1989, Warlock’s Tower would be a timeless classic. It explores rudimentary puzzle elements everyone should be familiar with and, armed with a deep understanding of why they work, introduces a meaningful wrinkle. In a game industry that often relies on deceptively shallow open worlds and filler for the sake of content to market, sometimes we need to take a step back and recognise that one grainy little monochrome screen can hold volumes.