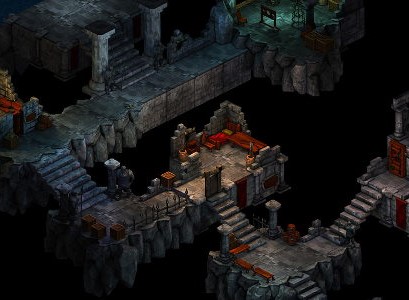 What an inspired way to evolve the humble gamebook. With The Warlock of Firetop Mountain, Tin Man Games has taken its penchant for tapping into the nostalgia that us older (well, relatively) people have for growing up in the 80s, and managed to layer it with even more nostalgia.

Related reading: For a second opinion of the game, check out Nick’s review of the PC original release.

Many of us fantasy and RPG fans who grew up through the 80s had gamebooks; including the original print of The Warlock of Firetop Mountain itself. When we weren’t able to get our gaming groups together to play some tabletop Dungeons & Dragons, and when video games were still an emerging way to get the hack-and-slash on, gamebooks allowed us to immerse ourselves in rich worlds and make real decisions about how we explored those worlds. There was even combat and danger and, well before “true endings” were a thing in video games, there would be dozens – or more – ways that your adventure could be cut short prematurely in a gamebook if you made some poor decisions.

Then there’s Hero Quest. This game was an absolute phenomenon in the 80s and allowed people who weren’t in the mood for the depth of Dungeons & Dragons to push some miniatures around a board and cast some explosive spells at nasties. Oh what fun memories I have of that game back in the day. 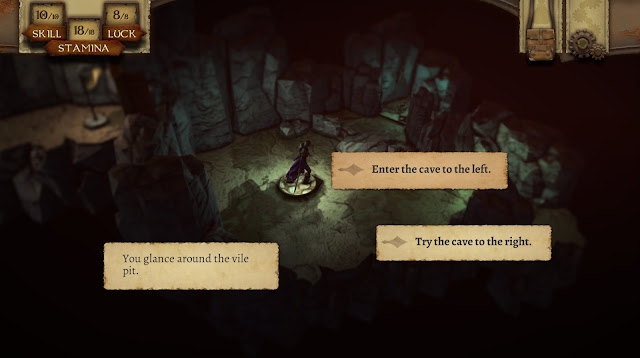 The Warlock of Firetop Mountain by Tin Man Games takes the storytelling structures of a gamebook and layers over the top of it a basic miniatures game that is strongly reminiscent of the likes of Hero Quest. That combination is just delightful.

You’ll start out by choosing which hero you’d like to take into the dungeon. Each hero has different statistics and skills and is represented by a different figurine. The base download has enough of these heroes to play with, and complete the game, though you’re able to buy additional heroes as DLC if you’re interested in having even more variety. Some of the figures have skills that make the adventure distinctly easier, while others are more specialised and, you’d have to say, better suited for advanced players. These figures are all rendered gorgeously and strike dynamic, heroic poses, just as though you were in your local game shop buying pieces for your Dungeons & Dragons campaign.

Intriguingly, they’re not animated, and neither are the enemy pieces. In-game all pieces “bounce” around as though they’re being physically picked up and moved, and while the appeal of this might be lost on younger players, again, the aesthetic of plastic or metal miniatures arrayed on a table in front of you, and how they are then moved around, is hugely nostalgic. The only thing that’s lacking is the ability to “paint” the figures; and I do think it’s a bit of a missed opportunity to not allow players to choose the colourisation on their figures at the start. 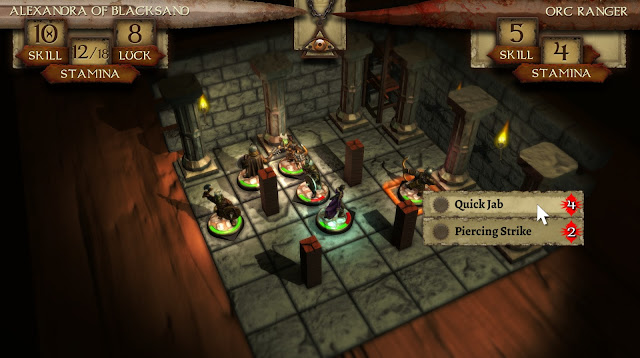 The story itself is told through passages of text. You’ll read a paragraph or two describing what is going on around your character, and then you’ll generally be given a choice of actions to take: “take the left or right path,” or “greedily grab the gemstone out of the eye socket of the hulking statue or leave it alone.” Pro tip: don’t be greedy. Based on your choices, the scenery will shift as your miniature is “moved” through the dungeon, and then you’ll do a bit more reading. Frequently you’ll also be treated to a detailed sketch of a particularly vivid scene, which can be either coloured or a black-and-white line drawing. This is yet another nostalgic hit for anyone who remembers how superbly the occasional bits of art in those gamebooks would set the pulp fantasy atmosphere.

Combat breaks things up. When battle is joined, your piece, as well as the enemy figures, are placed on a small grid. From there you need to issue commands to your piece – attack, special attack, etc – while trying to manoeuvre around to avoid too much damage from the enemy. The catch here is that both your turn, and that of the enemy, takes place at the same time. You’ll need to learn to read the ‘tells’ from the enemy figures (such as their direction and attack patterns) in order to predict where an enemy will be, so you can attack it effectively. It’s not the most complex combat system in existence, but it’s enough to remain interesting throughout and, again, calls back to the kind of simple-but-balanced combat that those gamebooks of old would offer.

And it can be very, very tough. If you’re stupid enough to actually try and steal the statue’s eye gem, prepare to restart the game. I’m speaking from personal experience here. The Warlock of Firetop Mountain, and indeed most of its gamebook contemporaries, loved punishing players for making “wrong” decisions, and learning the right path through the adventure to an ending that isn’t “you are dead” is a big part of the experience. None of that has changed now that the gamebook has been converted into a board game. Here’s where the variety of playable miniatures comes into its own; if you’re going to be replaying the same game from start over and over, you might as well keep the experience varied by playing with different pieces. 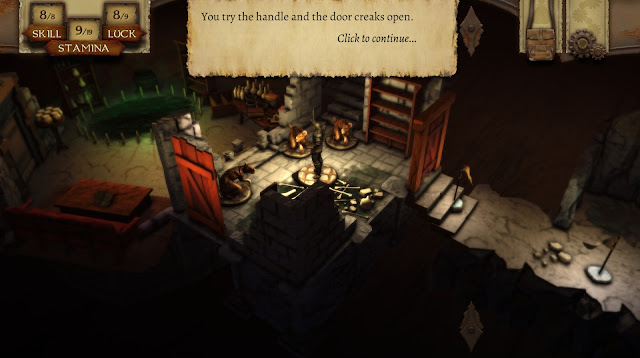 Most excitingly, Tin Man Games has clearly used this game to set itself up with a platform that can be easily transferred to other gamebooks, or even original games that make use of more complex world building and storytelling than what gamebooks offer. It’s a system that’s modular in nature and can be easily added to; new figures, new scenarios, and new adventures are all entirely possible. I can easily see the “Tin Man Games platform” working a little like Zen Pinball down the track, where the more engaged you are with the overall game, the more DLC there will be to enhance the experience further.

Related reading: And if you want to check out a traditional gamebook, then Sultans of Rema from Tin Man Games is a good place to start. Matt’s full review.

The Warlock of Firetop Mountain is clearly just the start, and it’s a clever, rich one. It’s a game that is steeped in layer after layer of nostalgia, and it would be silly to suggest that it’s not important that you are old enough to have that nostalgia for these kinds of experiences before the game will really click with you; but all the age demographic statistics out there suggest that there are more than enough people of around my age playing games on their iPad and would find real nostalgic joy in adding this to their library.

Retro reflections: On EA’s The Lord of the Rings titles and the problem with the availability of older games