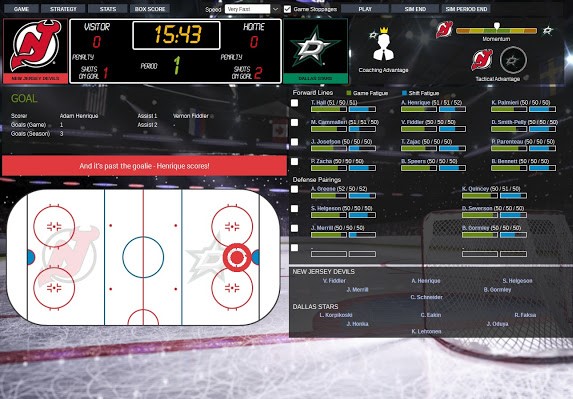 Hockey is one of the fastest sports out there, so a title that focuses on the strategy over on-ice action might seem a strange fit. That being said, Franchise Hockey Manager 3 manages to nail so many aspects of team management that the combination works really well despite being a slower paced simulation.

Related reading: The king of this particular genre is Football Manager, and the 2017 edition of that game was superb. Nick’s full review.

At its best, Franchise Hockey Manager 3 is a series of menus and options that is intelligently assembled and gives you unparalleled control over your simulation experience. Right out of the gates, it is hard to ignore that this title is officially licensed by the NHL. You have authentic teams as you assume the role of coach, manager or both. However, there are small nuances to the presentation that can be a little bewildering right at first.

For starters, there is no tutorial. You do not get the basics of position, strategy or development fed to you. The interface is undeniably busy, but also clean and efficient. Still, there is a lot of data to take in and many different menu items that can be interacted with. The presentation itself is incredibly sparse, without bells and whistles. Your menu options have no audible feedback, there is no catchy licenses music and outside of team logos, very little in the art department as well. You simply learn by doing, which can make for a rough initial experience as you choose between the Sandbox (basically you can do anything you want here in terms of setting up a league) or the Path to Glory (which is a more typical franchise mode found in other sports titles). 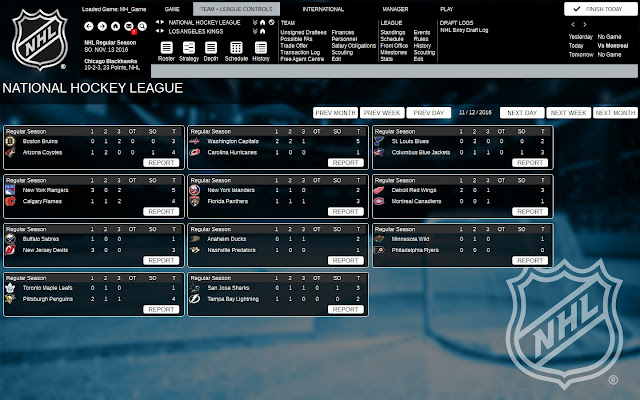 Sandbox is pretty cool if you want to spend some time fiddling with historical settings. You can come up with a range of different options and fantasy match-ups that tickle the imagination with very few restrictions. That being said, in just about any sports title, I tend to spend the majority of my time in either the career or franchise modes, and that continue to hold true here as well. Path to Glory lets you run your team for up to twenty five years

After some trial and error early on, I found myself getting some explanations a little deeper into the game. However,  by and large you are left to your own devices early on, so I found my first Path to Glory being an experimental experience without a lot of emotional investment as I kicked the tires from a variety of different angles. While I’m not a novice to simulation sports titles, and personally tend to prefer those with more of a slant towards action, I was brand new to this series. The user interface is a mixed bag, and not just because of its lack of presentational pop. Once you become really familiar with the layout, you can cruise around the menu-based system pretty effectively, but in the early going it is incredibly cumbersome.

However, as I become more comfortable with the offering and settled on some philosophies I liked to build my team around, I began to enjoy the experience more. This is a title built around micromanagement, and while you can certainly simulate some things and take a higher birds-eye view of the tactics and player development, I found myself getting the most out of the experience when I took deep dives into the different settings, strategies and roster management tools. 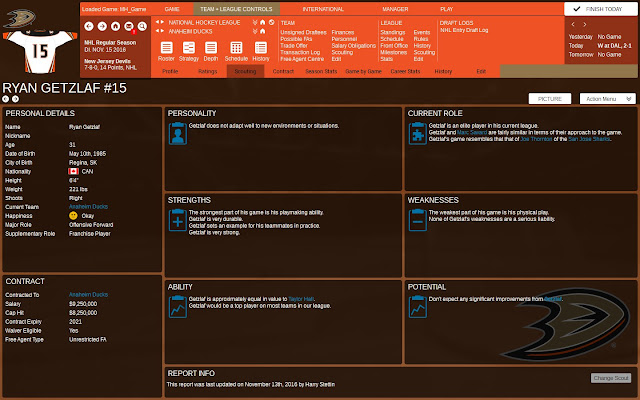 As I mentioned before, this is not an action title. You are not in control of the players directly. The games take place as simulations with some pretty bare-bones presentation built primarily around a play-by-play commentary. You can allow the game to progress on auto-pilot, asking the AI to work along certain philosophies you have previously established, or you can take a more hands-on approach and try to manipulate strategy during the game. I liked the option for the latter, but often found myself going the route of the former to see if my pre-set tactics would pay off in a purely AI scenario.

Related reading: And, of course, you can check out the NHL series if you want more “on ice” action. Nick’s review of last year’s edition of that series.

By and large I was able to get pretty good with it, though one area where Franchise Hockey Manager 3 could really stand to improve is in performance feedback. For all of the different buttons and switches you can manipulate leading up to game day, there is a surprising lack of actual feedback that explains what worked and why – or where your strategy falls on its face. One other area this title could stand to improve is in stability. I had a handful of crashes and some rather long load times. On the one hand, I get that there is a ton of data being crunched here. On the other, my PC is incredibly beefy and can load fully animated sports titles with high end graphics in close to the same amount of time. The crashes however, are the more frustrating of the two scenarios. I use the auto save feature, so the loss of time and data is largely mitigated when it happens, but having had at least a half dozen crashes or so on a machine that runs far bigger games without stability issues, it happens just a little more often than I would like.

Management games are, of course, incredibly niche, but as SEGA’s Football Manager series has proven, there’s a lot of potential in there for these games to also be utterly life-consuming. Is Franchise Hockey Manager 3 up to that standard? No quite, but it’s on the right path.