We’ve been closely following everything Koei Tecmo has to give us about Atelier Firis: The Alchemist and the Mysterious Journey, the second entry in its “Mysterious” series. After all, we gave the first entry — Atelier Sophie — a coveted five-star score; Matt praised Gust’s series for being “smarter than almost anyone gives them credit for.” Additional details for the upcoming release have been revealed, and we are tickled to share them with you! First, a new trailer offering the first glimpse at the game’s Tent system as well as some new faces (Angriff, a hearty mercenary, and three alchemists — talented Ren, carefree Norbert, and clumsy Dion):

Despite the new characters to ogle at, the real guts to this trailer is information regarding the Atelier Tent. Synthesis is, as always, an integral part to this Atelier game. Firis’ Atelier takes the form of a portable tent, allowing her to synthesize wherever her heart desires. The Tent can also be personalised to display keepsakes from her adventures. Now that synthesis is on the move, there are changes to the system as a whole. For example, Mass Synthesis lets Firis create items as large as a bridge or a boat.

It’s always nice when predictions come true: in our Catch-up coffee of January 26 we opined: “.. we anticipate that this crossover may be considered for a Western localisation.” 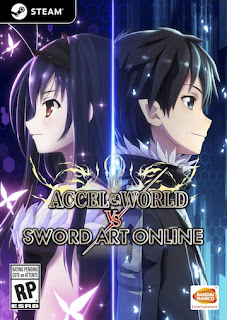 Bandai Namco announced that Accel World vs. Sword Art Online is coming to PlayStation 4 and PlayStation Vita in North America and Europe this (northern) summer. For North America, release will be digital-only on both systems, whereas for Europe the PS4 version will also see a physical release. The various box art for the versions also shows a Steam edition (see above); however, no PC version has been mentioned so far.

Developer Keen Games and publisher 505 Games announced that Portal Knights, the sandbox crafting RPG adventure, is coming to PlayStation 4 and Xbox One in Europe on April 28 and in North America on May 2. Portal Knights has been in Early Access for PC on Steam since February 2016 and has overall “very positive” user reviews. The game will launch fully on PC on April 28.

The description for the game states: “No one can remember how long it’s been since the peaceful world was torn apart by The Fracture, plummeting it into darkness. Is there any soul brave enough to reunite the shattered realm?” The player can travel between randomly generated 3D sandbox worlds where they mine and gather resources to craft your arsenal and supplies, as well as build a home and start a farm to grow crops in real-time. There are three RPG character classes to choose from — Warrior, Mage, or Ranger — and the ability to customise your appearance, skills, and gear.

Portal Knights is, in addition to a sandbox game, a four-person co-op multiplayer game that features tactical combat and boss battles. The development team is working on introducing split-screen, which players have been requesting for some time, as well as implementing the ability to explore different islands while in the same multiplayer session.

Has-Been Heroes launches in March for all major platforms

We recently reported on Frozenbyte’s rogue-like action strategy game Has-Been Heroes in our January 17 edition of the Catch-up coffee, and now we have a confirmed launch date for PlayStation 4, Xbox One, PC, and Switch: March 28.

An overview of the game is provided here via the preorder listing on GameStop:

Has-Been Heroes is a roguelike action game featuring a band of heroes on a quest to escort the King’s twin princesses to magic Academy. The game combines strategy and action into a mix where you control three characters and focus on combining spells and items for devastating combo effects!

Has-Been Heroes features a young rogue, a wishful wannabe hero, who stumbles across a pair of old, battle-worn heroes. They receive the ultimate quest from the King – escort his precious twin princesses to magic Academy, on the far side of the world. Eager for heroics, the young rogue joins the band of heroes and the trio put their best foot forward.

As the heroes travel across the world, they come across a wide variety of enemies – ranging from bad-breath skeletons and zombies to evil spirits, the meanest of all enemies (100% evil!). Each enemy type (and enemy subclass) has specific attributes and immunities – evil spirits cannot be hit by melee attacks, for example, so the player needs to make them hittable by using spells of a certain type.

New characters are unlocked during the course of the game. The new heroes are each unique with custom attributes and a set of different starting items/spells that give the player an edge in combat – or a vulnerability.