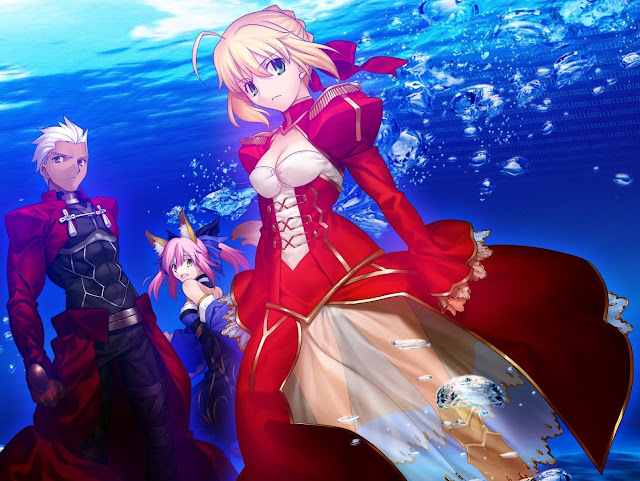 Before I started playing Fate/Extella, I had no real idea of what the Fate series was. I’d watched the Fate/Zero anime, but wasn’t really sure of what was going on in that one. I think it says a lot about Fate/Extella’s quality that I’m now watching the anime in the right order (starting with Fate/Stay Night). I’ve also ordered the original visual novel from Japan, and I now understand why Saber is such a popular character when it comes to the figurines industry in its homeland.

Of course, because I haven’t been following the Fate series, I didn’t realise what Fate/Extella even was before I started playing. Imagine my delight in finding out that it’s a Dynasty Warriors-like title, in which you take control of one of a bunch of heroes, each with their own play style, and go ballistic on horde after horde of enemies. As one of the biggest Warriors fans out there, any game that tries to emulate the Warriors games immediately catches my attention; there’s something very cathartic about racking up a KO count in the thousands.

Fate/Extella dials that action up to 11, and even beyond. “Thousands” of KOs is an understatement in the typical level, and it quickly becomes obvious why: each stage is so utterly packed with enemies that it’s difficult to see anything else. Of course, these enemies aren’t really a threat; it’s only the boss enemies, which periodically appear as you defeat the peons, that provide any kind of danger to your character – but what they do tend to do is slow you down. And doing well at Fate/Extella requires that you get those kill counts happening quickly.

The action in this game really is incredible. #PS4share https://t.co/y81njOJwZr pic.twitter.com/ZwidAMIp19

Each level is broken up into small regions, a little like the earlier Dynasty Warriors games. The goal is to invade each small region, and wipe out all the “boss” characters in those regions. The more valuable the region, the more bosses it will hold. Defeat them all, and the region converts to your side.

At the same time, the enemy is sending its troops to attack your captured territories. If they capture too many of them it’s game over. If you manage to capture enough of the opponent’s territories, then the level’s key boss – a named character – will enter the fray to attack you. Defeat him or her and it’s a successful level.

The major named characters are a lot of fun because they’re all based on real historical figures, just animefied. As anyone who follows along with Fate will know, each of the characters has a name based on their “class” (so, Saber, Rider, Berserker, Lancer, Assassin), and then a true name, which is what they were called in history. These range from Saber, who is actually Nero (at least, in the game, so she’s distinct from King Arthur, who she was based on in the anime), to Cu Chulainn, the Irish folklore hero-turned Lancer, Alexander (as in, The Great), and Lu Bu, who this time around is a Berserker. Actually, what am I saying? Lu Bu is always a bloody berserker in every game he shows up in, and he’s always terrifying as hell. 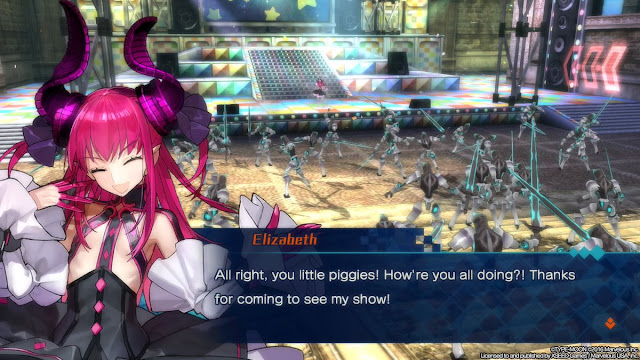 My favourite, however, is Elizabeth Bathory, the psychopathic, mass-murdering noblewoman from Hungary, who has been reimagined as a psychopathic loli girl pop music idol, pink dress and all.

As a fan of history, I’m always interested in looking at how artists and creatives take historical characters and personas and re-work them to fit with their own tales. None of these characters even closely resemble their real-life counterparts, and yet at the same time they’re quite believable in those respective roles, thanks to the way the developers have taken the qualities that they are historically best known for, and built the characters around them.

We are given plenty of time to get to know the characters, too, because the franchise’s’ roots in visual novels is very evident between each battle. There is a lot of dialogue to wade through, and while this is appreciated (as it allowed even me, with my limited understanding of Fate, to struggle through the plot and make sense of it all), it can become draining to read through the more inane moments, especially when you’re just itching to get back out on the battlefield. 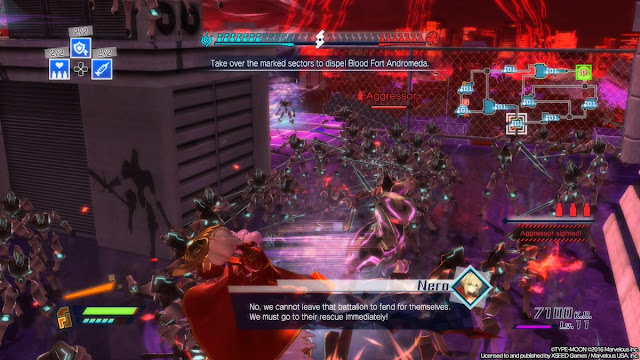 The more inane moments of the plot generally have to do with the game’s fanservice. The Fate franchise began life as an adult visual novel – adult as in sex and nudity – and while the series has grown into a more safe-for-work series, it hasn’t entirely lost its fanservice roots. Characters take baths together (again, with no actual nudity), and are constantly talking about how much they love one another. There’s nothing wrong with fanservice – and I’d be lying if I said I wasn’t looking forward to playing that original visual novel and seeing Saber and Rin Tohsaka get it on and do the horizontal mumbo with the protagonist – but in that narrative’s context, the characters are also really well developed and the sex is an extension of their characterisation. In Fate/Extella, it’s quite arbitrary and I wasn’t left with any deep sense of relationship between the characters, leaving the relationships side of the game feeling quite shallow.

The main storyline has a couple of different playable characters, and then there’s a number of side stories, each starring one of the minor characters from the main game. It’s a little disappointing that these side missions reuse the exact same battles as the main quest (and therefore play more like the “free battle” mode than the bonus stories mode that the developers probably intended), but on the positive side each of these additional characters do feel different to play with, so there’s a nice sense of variety in playing around with each character and deciding on a favourite.

Fate/Extella does a good job of representing the Fate series, and does a really good job of giving us a high-action Dynasty Warriors-like game to enjoy. As this is a rare example of a “Warriors” game that doesn’t come from Koei Tecmo, it’s nice to see a different developer’s take on it. While there are some clear budget constraints (the overuse of the same level assets) and some aggravating narrative fanservice elements that don’t really go anywhere, overall the game is highly entertaining and vibrant. And, again, it’s made me into a fan of Fate. If that’s not a sign of a quality game, then nothing is.