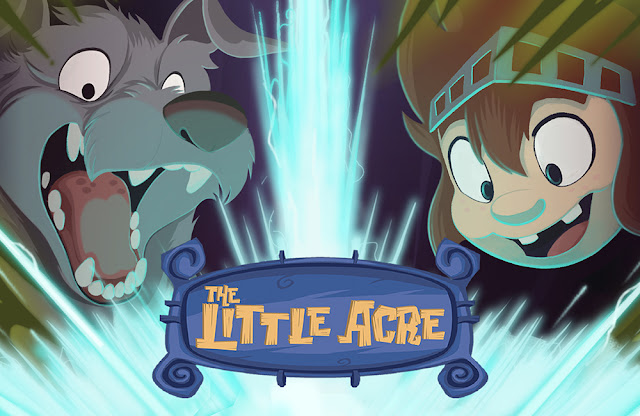 Wow, The Little Acre is gorgeous. That’s the first thought that popped into my head when I saw the debut trailer for the game back in August, and it remained was one of the prevailing thoughts I had while giving the game an early playthrough. Coming from developer Pewter Games, executive producer Charles Cecil, and indie publisher Curve Digital, The Little Acre is possibly my favourite point-and-click adventure of the year — which is saying something considering how many of them I have enjoyed this year.

The graphics at the start screen set the stage for a large part of the game. There is some wonderful drawing skills at work here, with sweeping brushstrokes and small details combining to show The Little Acre, the plot of land where the story’s protagonists live. A combination of smart animation and parallax choices give the scene movement despite the camera staying in place. The Little Acre felt like home before I even pressed the start button.

The comfort moves past the start screen and into the gameplay. The first time you get to play is pure point-and-click adventure as our young hero Aidan tries to get dressed without waking his slumbering toddler at the other end of the room. A pointer appears and the player uses the left joystick to move it around and interact with nearby objects. As he gets out of bed the world opens up a bit, allowing him to explore in and around his home. 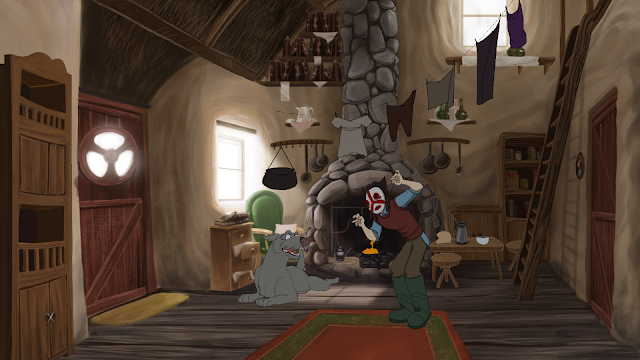 The Little Acre’s story somewhat reminds me of the Disney version of Beauty and the Beast, where Belle is replaced with a lanky man (Aidan) and the french countryside morphs into 1950s Ireland. Aidan’s kooky inventor father has gone missing, leaving behind Aidan and his daughter Lily. Unfortunately, it appears as though Aidan stumbles into the same danger while investigating the disappearance — leaving his home and entering an unknown world where nothing looks the same. The artwork takes a dramatic turn at this point. Normally this would be jarring to me, but somehow going from brushstrokes to cartoons still felt cohesive. I believed that this world would exist parallel to the original. Lily, being the curious and hard-headed child she is, decides that she can help and ends up in the same place.

The game alters between the perspectives of Aidan and Lily. Each plays the same, but Aidan is always slightly ahead in the world, leaving Lily consistently playing catch-up. What a perfect way to represent a child: trying to catch up with and become part of the adult world. In both the real world and the unknown, the colourful and puzzling land named Clonfira, Aidan’s approach is more cautious whereas Lily’s is more adventurous. He tries to stay one step ahead of her (for example, placing a garden gnome at the entrance of their yard and telling Lily it would tattle if she ever left the property) but she always finds a way to forge ahead (in this case, she takes out the informant with her mighty sword).

Lily may just be my favourite character in any game I’ve played in 2016. Her partner in crime is a big grey dog named Dougal. Dougal is quite lazy but Lily has learned to manipulate him to do what she needs, such as opening a cupboard. Lily is not a stereotypical female, or child, and I think that is what makes me love her the most. She has a sword and a metal headpiece instead of a tiara and a wand. She actually loves to seem all things medieval, and she is curious and excitable, loveable and headstrong, and very much a handful for her father.

Other than pointing and clicking, a large part of many point-and-click adventure games is puzzle solving. It’s not uncommon to wander from one area to another and back again, collecting the bits and bobs required to complete the task at hand. Exploration is key to solving puzzles such as these when objects need to be used together to make the story progress. Other puzzles that repeat are those that involve flipping a series of switches to get from point A to point B. The puzzles are not always intensely difficult but they are always welcome, adding another layer of gameplay that I intensely enjoyed.

The voicework in The Little Acre is impeccable. You can hear Aidan’s voice ooze with love of his daughter, whereas Lily’s voice is more intense, upbeat, and childlike. When a creature named Merr is encountered, his voice has equally distinct qualities; in fact, each new character with a voice sounds different than the last, helping to create a very believable cartoon world. The music further draws you in with what reminded me of just about every film I enjoyed from my childhood all combined into one epic soundtrack.

Related reading: For another prime point and click adventure featuring far more mature themes, look into The Slaughter on iOS.

The Little Acre exemplifies every reason indie point-and-click adventure games can still do more than hold a candle to the AAA shoot-em-ups with more brawn than brains and beauty combined. The story of a young single dad with a missing father and a rather rambunctious daughter touched my heart in ways I forgot video games could, and every time I had to put the controller down I yearned to just boot the console again and enter the phenomenal world The Little Acre takes place in.

The DDNet Awards! Mobile Game of the Year