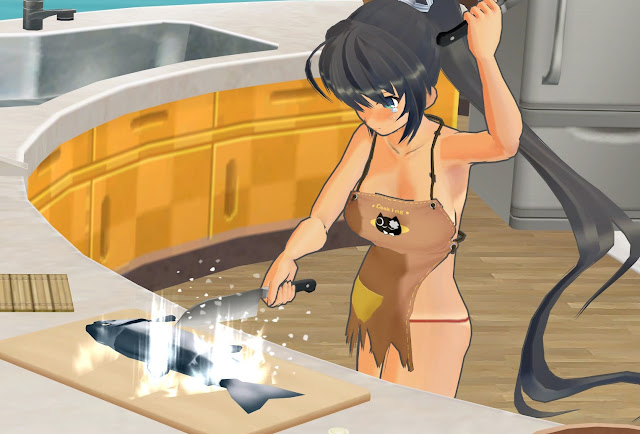 The almost entirely busty group of ninjas are back serving different kind of fanservice. Lured in by the promise of a secret ninja scroll of untold potential each one will put her cooking skills to the test in order to obtain the secrets of that scroll before anyone else.

Related reading: For a second opinion, check out Clark’s review of the PlayStation Vita release.

Coming to us from a franchise well known for its fast paced combat (underneath the heaving boobs of its all-female cast), Senran Kagura Bon Appetit! is an entirely different thing, and utterly insane at that. In this game the girls compete against one another in 1v1 Rhythm styled Iron Chef battles. Yep. In order to come out on top and keep their clothes intact, each girl will need to win the judging of a three course meal. Losing any of these courses will strip them a little, while losing the final match will lose it all (including the match, of course).

I was a little tentative in getting into this series, as I’ve come to the party late, and Shinovi Versus was my first title. I found it slightly intimidating that there are a lot of characters, and as such, a lot of backstories to understand, and tensions between characters to come to grips with. In the end, however, the depth that the game offered won me over, as I would not have expected with the sheer level of fanservice would have tht much more to it than that. Unfortunately Bon Appetit does not follow the same path as, while there is a mountain of fanservice, there is nothing to contextualise what’s going on at all. From that regard, Bon Appetit is rather shallow and it’s unfortunate as, weird concept aside, I’m sure the developers would have been able to come up with something that could have at least given context to the actions, even if it was utterly surreal and balls insane in the process. 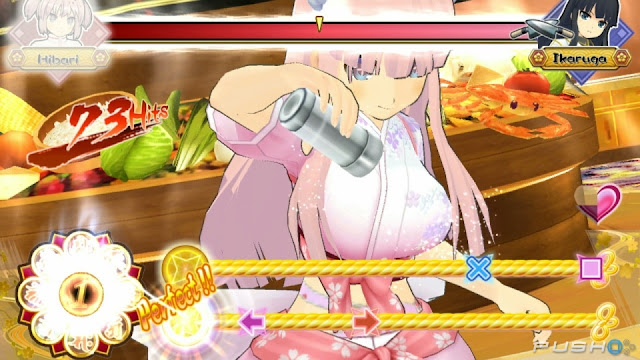 In terms of the gameplay, Bon Appetit makes up somewhat for the lack of narrative as it mechanically sound, and thankfully for a rhythm game, has a solid soundtrack. Players are presented with two horizontal tracks, each of which has little icons that scroll across in time with the music, and the relevant button needs to be pressed at the right moment in order to build up score. Of course, as with any good rhythm game, pressing keys at the right time may sound like it’s easy enough but as the stages move on and icons start flying everywhere it can be very difficult to score well.

Depending on how much you like the girl that you’re in control of, the temptation to deliberately lose can be difficult to resist. Yeah, yeah, hentai and all that, but let’s face it, fanservice is why you’d play this game. After the judging of each course the winner celebrates while the opponent loses a portion of their clothes. The better the margin that you beat your opponent by, the more food that the judge receives and thus the happier they are. But then you might just want to play really well, too. Getting a perfect rating in the first two courses will cause a heart-shaped symbol to appear in the final segment. Hitting that will switch views from a cooking battle to a that of your opponent dancing much more suggestively. And that’s not even being the icing on the cake. Getting a perfect victory in all three courses will treat you to a view of the character dressed in nothing more than chocolate sauce and whipped cream on top. Yummy.

Complementing the story mode’s rhythm battles is an arcade mode that just throws battle after battle, and might be the better option given how weak the narrative is, and a free mode which lets you pick the challengers as you see fit. There’s not much to do outside of the combat, but it does offer the one feature that, again, will appeal exclusively to the fans; you’re able to drop into the wardrobe for each character, and alter their clothes (yes, including the bra and panties). There’s plenty to unlock there so you can play Victoria’s Secret with your favourite girl. 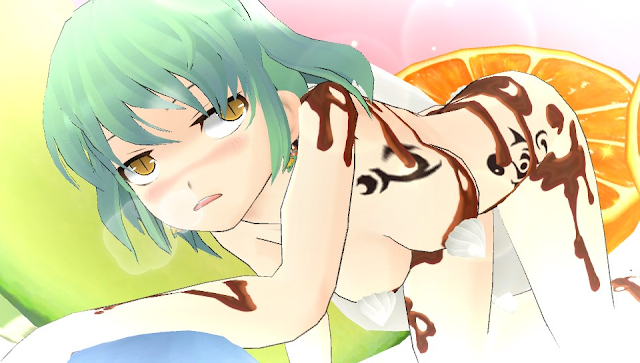 Overall Senran Kagura Bon Appetit! is fun, as the rhythm portions and the soundtracks that they use mesh well together. But let’s not pull punches about this; this is a game that is going to be exclusively of interest to existing fans of Senran Kagura, and who are also fans of rhythm games. It’s not going to convert anyone to the franchise, and unlike the likes of Persona 4 Dancing All Night, it’s also not meaty enough as a rhythm game to appeal to people who aren’t already deeply involved in the genre. It’s pure fanservice.