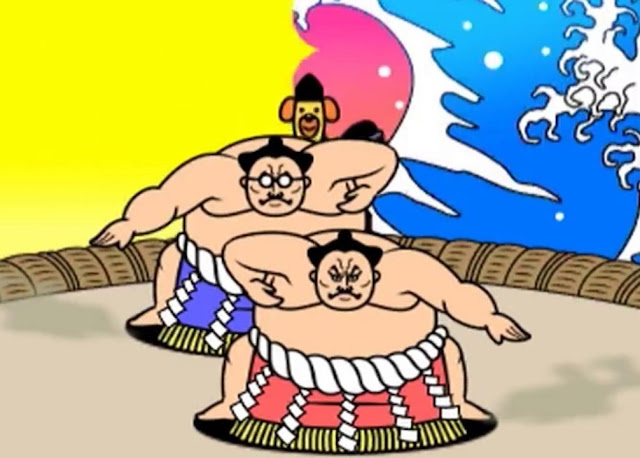 I first fell in love with Rhythm Heaven in 2010, one year after its worldwide DS release, after everyone had written it off as “probably shovelware” at the end of the DS’s cycle. It’s a series every fan of rhythm games should be acquainted with, taking the WarioWare formula of quirky and charming microgames and pairing it with a deviously challenging rhythmic element. Despite three phenomenal titles on multiple platforms, music composed by J-pop legend Tsunku and even an ad campaign with Beyonce, Rhythm Heaven still hasn’t quite made its way into Nintendo’s heaviest hitting franchises. Nonetheless, developers Nintendo SPD have a natural penchant for creating unique, interesting scenarios and after cheering along to idol singers, dancing with frogs and interviewing professional wrestlers over the DS and Wii entries, I was perfectly hooked with this package that pulls them all together.

When Rhythm Heaven Megamix was announced, I was overjoyed with the chance to re-experience the series’ high points, as well as some games from the Japan-only Rhythm Tengoku for the GBA. With the addition of a handful of original minigames for the 3DS, this entry boasts far more minigames than any other Rhythm Heaven game. Megamix eschews the DS’s tap and flick mechanics in order for a full-button experience, although basic stylus controls are also accessible from the options menu. As a compilation, this is the ultimate Rhythm Heaven experience, offering both youthlike delight and fiendish challenge which is immediately compelling and marvellously addictive.

For those not familiar with the series, players are tasked with completing a variety of three minute long microgames by pressing buttons in time with music. With a concept so deceptively simple, the developers run amok with creative level designs, catchy compositions and some genuinely laugh-out-loud moments which are sure to delight players. Don’t let the game’s colourful aesthetic fool you either, as it’s going to be punishingly strict on your timing and some stages outright distract you with their visuals in an attempt to mess up your flow. 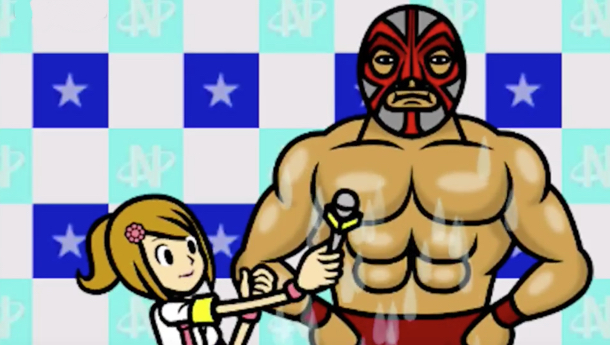 It’s clear from the single player campaign that Megamix is a fuller gameplay experience compared to the minimalistic design of the DS and Wii entries. The player is introduced to a protagonist, Tibby, who aims to return back to his home-world of Rhythm Heaven with the help of some friends along the way. The writing is lighthearted and will bring a smile to most players, but it does create large breaks of the game which don’t involve rhythm minigames. It’s honestly odd to see so much text in a Rhythm Heaven game, since the previous titles were so adept at visual storytelling through the individual minigames.

The story also does its best to ease the player into the Rhythm Heaven experience, with simpler versions of classic minigames. Whilst it does make the series much more accessible, it feels too much like a tutorial which can’t be skipped, so Megamix will have a slower start than other entries in the series. The game slowly unfolds to reveal additional features such as the Challenge Train and Perfect Level Challenge.

The Challenge Train is the most notable addition to the experience, allowing players to enjoy existing levels in a sequence, with additional win/fail conditions such as having to attain a certain score or to finish the level with a minimum amount of mistakes. In these challenges, the games are at a higher speed and really test the player’s ability. An added bonus is the ability to invite friends along to play the game together, building upon the fun multiplayer foundation set up in Rhythm Heaven Paradise. I suspect not everyone is going to like the Challenge Train, especially as it’s required to unlock the right to play some additional minigames, but it’s good to see Nintendo providing some more postgame content in Megamix. 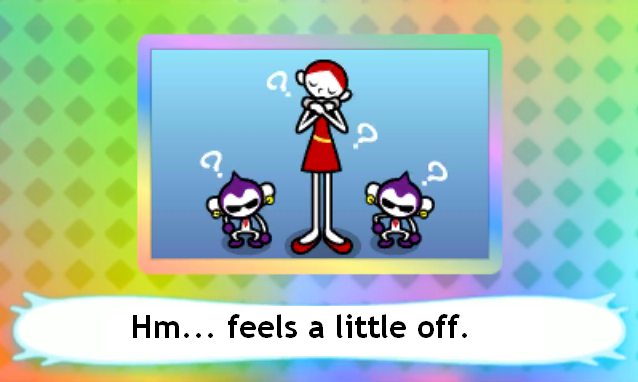 Another new addition is a bottom screen which tracks the player’s inputs and gives real time feedback on whether their timing was too quick, too slow or just right. In each rhythm minigame, there will be an opportunity to earn a “skill star” for hitting a particularly difficult note with perfect rhythm, and while these are largely just for completionists, it’s a further degree of challenge. After each level you’ll be given a score out of 100 for how well you did, and unless each of your notes is perfect then the elusive three-digit score will be out of your reach.

Unfortunately, not every game from past entries made it into Megamix, and some fan (read: personal) favourites didn’t make the cut. The absence of DJ School and Love Lab from DS and Donk Donk from Wii were noted, and a few other games missed out on having their harder iterations making a show as well. The overall game is easier as a result, and it’s helped by the touch-screen display which lets players know how well their taps fit the required timing.

Nitpicking aside, Rhythm Heaven Megamix is still the definitive rhythm game for the 3DS. With a quirky sense of humour, simple gameplay and a jubilant aesthetic, this is a game sure to delight all players while training their sense of rhythm. After a week of playing, I found myself subconsciously tapping along to any music which played around me with impeccable timing, and if that’s not a glowing recommendation for this game then I’m not sure what is.